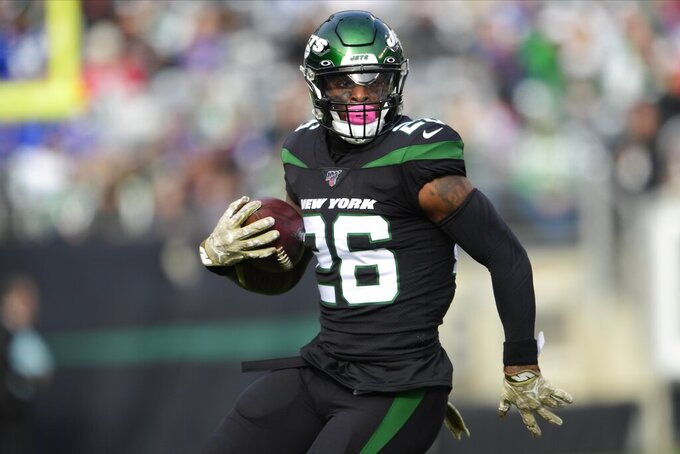 FLORHAM PARK, N.J. (AP) — New York Jets running back Le'Veon Bell sat out practice with an illness, but is expected to be OK in time for the team's game at Washington on Sunday.

When a reporter jokingly asked if Bell might have mononucleosis — which sidelined quarterback Sam Darnold for a month — Gase shook his head and half-smiled.

Bell is also listed on New York's first injury report of the week as dealing with sore ribs and a knee ailment. He hurt his ribs last Sunday in the Jets' 34-27 win over the Giants, but didn't believe it was anything serious. Bell tweaked his knee two weeks ago at Miami, but tests came up negative.

NOTES: Gase said Tom Compton will take over as the starting right guard after Brian Winters was placed on season-ending injured reserve on Tuesday. “Yeah, I mean, we're running out of bodies,” Gase said. ... S Jamal Adams was the AFC's defensive player of the week after he had nine tackles, two sacks, two forced fumbles and a touchdown on a recovery during which he ripped the ball out of Giants QB Daniel Jones' hands. ... The Jets signed OL Ben Braden to the practice squad. Braden spent most of the past two seasons with New York and was cut in September. He was most recently with Green Bay, which released him last week.