Jets' Wilson looking to be less 'robotic' and just 'rip it' 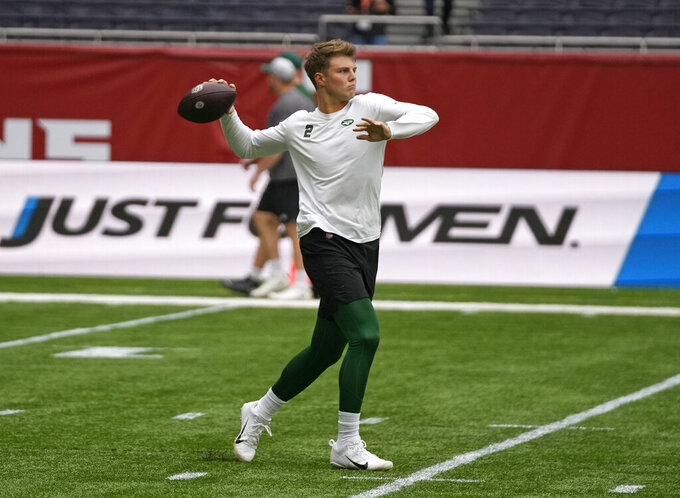 NEW YORK (AP) — Zach Wilson has watched all the film and sees what everyone else has.

There have been some terrific throws on the run by the New York Jets rookie quarterback, the type NFL teams drooled over leading up to the draft. And far too many missed opportunities on shorter, more “boring” plays, as coach Robert Saleh has called them.

It's the inconsistency of a player just five games into his pro career. And it's something Wilson is set on changing.

“I’ve obviously got a lot I’m learning every single week and I’m always putting my mind on new things I need to learn,” he said Tuesday. “And with that sometimes comes being a little bit robotic.

“And I think sometimes that's how those throws come out, as if I'm aiming them. I've got to throw it and rip it."

After all, that's what made Wilson such a star at BYU, his combination of arm strength and multiple arm angles. And his ability to turn seemingly nothing into a big gain.

That has been a tougher task in the NFL, of course. There's learning a new offense, facing complex defenses, tweaking footwork and mechanics, and executing Mike LaFleur's attack. It has all added up to a tough start for the 22-year-old Wilson, who heads into the Jets' bye-week break with just four touchdown passes and a league-leading nine interceptions.

“You’re always looking at ways to try to simplify it for him,” Saleh said. "But at the same time, the thing that you’re not going to be able to help him with is the speed of the game and the change in the schemes that he’s going to see every week. Those are just things he’s got to get better at and it’s going to take reps to do it.

But there are some things that might make it a little easier.

The Jets are being hindered by brutally slow starts. They have zero points and just 79 total yards in the first quarter through five games. Wilson even cited the Jets averaging only seven plays in the opening quarter in their last four games.

“We've just got to establish something,” Wilson said. “It feels like we’re sitting on the sideline for a long time and it’s hard to get any sort of rhythm when we're doing that.”

For sure. And who's at fault? Well, in this case, everyone. That goes for LaFleur, Wilson, the O-line, the receivers and the running game. But one thing that can keep drives alive is Wilson dumping the ball when he needs to.

In New York's 27-20 loss to Atlanta in London on Sunday, there were a handful of plays Wilson was looking downfield rather than seeing an open receiver short — and ended up taking a sack or a hit, or throwing it away. He also short-armed a few passes that could've kept the chains moving.

“I would just say overthinking them,” Wilson said of those plays. “To an extent, aiming the throw rather than just throwing it, you know, like I’ve always done my whole life. Just reacting to what the defense has given me and just throwing it, rather than putting too much thought into it.”

The players will be at the facility through Wednesday, and then will break until next Monday. The Utah native is planning to go home to see his family.

“I think it'll be good to get away from football a little bit,” he said.

But not completely. Wilson will also meet with John Beck, his personal quarterback coach, to try to clean up some issues.

Saleh compared Wilson's start to that of Bills star Josh Allen, who struggled early in his first season before everything started to click. Allen is now considered one of the NFL's top young quarterbacks.

“I don't want to feel like I have to make an excuse for myself of why I'm not getting the job done,” Wilson said. “I understand that and I understand it's a process and having perspective. But I also have high expectations for myself.”

So do the Jets and a frustrated fan base that's hoping Wilson can be the face of the franchise for years to come — as Allen has established himself in Buffalo.

“He’s obviously super talented, a very confident player,” Wilson said of Allen. “And so I know that time will come for me. I just need to keep working at it and getting better. And of course, I need to be patient.”

That might be the key, especially while going through a crash course in life in the NFL.

Meanwhile, his teammates haven't budged in their support despite his struggles during New York's 1-4 start.

“The coolest thing I think about Zach is he doesn’t let anything affect his confidence,” center Connor McGovern said. “He is a very confident individual and nothing’s going to break that confidence.”

McGovern is in his sixth NFL season and second with the Jets after four in Denver, and has seen some young quarterbacks get their confidence rocked and never recover.

“I think the Jets as an organization and fan base can every week expect bigger and better things from Zach,” McGovern said. “And the guy’s going to be around for a long time making spectacular plays.”