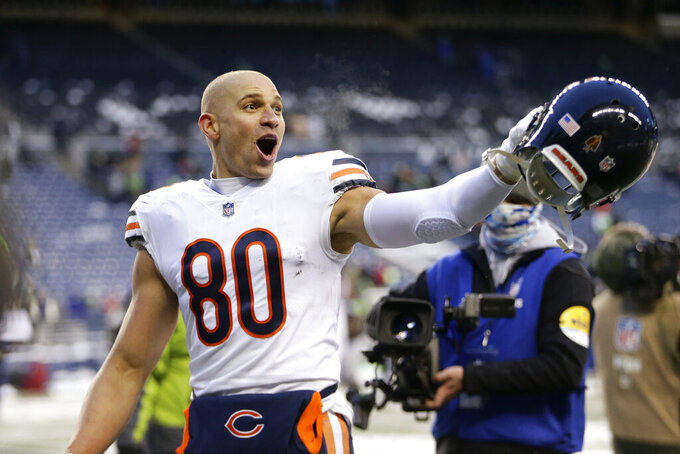 Chicago Bears' Jimmy Graham motions to fans as he heads off the field after his team defeated the Seattle Seahawks in an NFL football game, Sunday, Dec. 26, 2021, in Seattle. (AP Photo/Lindsey Wasson)

The award recognizes people who demonstrated exceptional effort to honor and support members of the military community. It will be recognized on Feb. 10 at NFL Honors, when The Associated Press reveals its individual award winners for the 2021 season.

“From advocacy and support to our currently serving military to ensuring our veterans successfully transition with employment after their service as well as supporting military children, all three finalists for the 11th annual ‘Salute to Service Award presented by USAA’ should be recognized for their commitment to America’s military community,” said Vice Admiral (Retired) John Bird, USAA's senior vice president of military affairs. "We thank and deeply appreciate Jarret, Jimmy, and Andrew for joining USAA in always honoring and serving our military, veterans, and their families, and encourage all Americans to follow their lead in participating in acts of service and support for our military.”

The mission of The Jimmy Graham Foundation is to provide life changing and impactful experiences through the freedom of flight. To recognize the accomplishments and sacrifices of veterans, Graham takes veterans airborne in his two US Army aircraft restorations, a 1957 de Havilland Beaver and 1967 UH1 Iroquois “Huey” helicopter. He also provides flights for underprivileged youth as an introduction to aviation.

With the goal to employ veterans, Johnson recently partnered with a service-disabled Air Force veteran to start a Black Rifle Coffee franchise in Niceville, Florida. The franchise employs more than 40 veterans, active-duty servicemen and women, veterans’ spouses and children of military members from all around the world. He is an annual sponsor of SOF Missions, a non-profit that provides care to veterans with post traumatic stress disorder (PTSD) and traumatic brain injury (TBI) with the goal of ending veteran suicide.

Over the past three years, Beck has partnered with a variety of military service organizations. In total, he’s reached more than 425 military families through his outreach. In November of 2020, he assembled care packages for military bases across Colorado and helped host a virtual visit with Wounded Warrior Project veterans. He hosted a barbecue for Fort Carson military families in partnership with USO Colorado, and helped host a pizza party and game night for kids at the Buckley Space Force Base Youth Center.