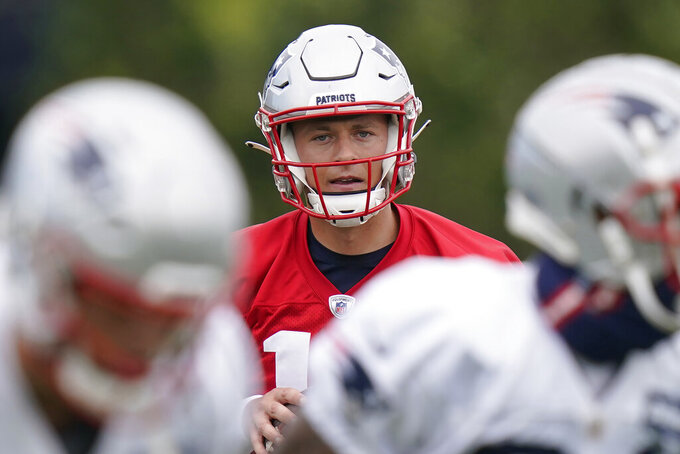 New England Patriots quarterback Mac Jones looks for an opening from the pocket while performing field drills during an NFL football practice, Tuesday, Aug. 31, 2021, in Foxborough, Mass. The Patriots released quarterback Cam Newton on Tuesday, Aug. 31, clearing the way for rookie Mac Jones to open the season as New England's quarterback, according to a person with knowledge of the move. The person spoke to the Associated Press on condition of anonymity because the decision has not been announced. (AP Photo/Steven Senne)

FOXBOROUGH, Mass. (AP) — One thing that was apparent watching the Patriots offense last season was the lack of dependable pass catching options quarterback Cam Newton had at his disposal.

It was a point of emphasis in the offseason, one that coach Bill Belichick sought to improve with the addition of tight ends Jonnu Smith and Hunter Henry.

Soon after signing free agent deals, both tried to acquaint themselves with Newton, making trips to meet up with the quarterback for informal throwing sessions.

Those workouts proved to be moot when the Patriots surprised many around the NFL by releasing Newton at the end of training camp and elevating rookie Mac Jones to the starting job.

It’s put the spotlight on Jones, whose first game out of the gate will be against a Dolphins defense that features 2020 interceptions leader Xavien Howard.

It’s also underscored the importance of Smith and Henry, who will be counted on even more to help take pressure off their young quarterback. Smith said he is excited for Jones, adding that he’s ready to give him all the support he can to make it a successful first outing Sunday.

“He’s taken that role and he’s done a great job at it. That’s why he is where he is,” Smith said. “He does everything he’s supposed to do. ... We’re just ready to ride for him.”

Smith and Henry were slowed by injuries at different times this summer, Henry was dealing with a shoulder issue and Smith a leg injury.

But they entered the first game week Monday without restrictions in practice, a good sign for them and Jones as the Patriots prepare to open the season with back-to-back division games.

“We missed that for a little bit in camp with both of us not being out there, but it’s fun once we’re out there and rolling,” Henry said of building chemistry with Smith. “It’s a good competition. Just being able to build that chemistry with him while we’re on the field. Talk through things, see how I see things, how he sees things. Bounce things off each other.

Over the past two seasons a group of Patriots tight ends that has included Devin Asiasi, Ben Watson, Ryan Izzo, Matt LaCosse and Dalton Keene combined for just 54 catches for 672 yards and three touchdowns.

Asiasi is the only one of that group currently on the roster, leaving plenty of room for Henry and Smith to make their marks in 2021.

Smith and Henry combined for 101 catches and 12 TDs last season.

Henry’s recent injury kept him sidelined for more than two weeks during training camp, which may have put him too far behind physically to be ready for Sunday’s opener.

Asked if he has any doubt he’ll be ready to go, he said he’s only focused on following the program the training staff has laid out for him.

“I’m just trying to get better every single day and you know, apply myself every day and be ready to go when it comes,” he said.

How well Smith and Henry perform when they do get on the field together this season will hinge on how well the duo shares the workload in run blocking and in the passing game.

Smith said the synergy in practice is right where it needs to be at this point.

"It’s been great, just us feeding off each other’s energy,” Smith said. “Working, pushing each other, on the practice field, in the weight room. Two alpha males, man, just being able to give each other a push. The greatest part of it is that’s my guy, and I’m his guy. We’ve got each other’s back. I’ve got his back. I know he’s got my back.”