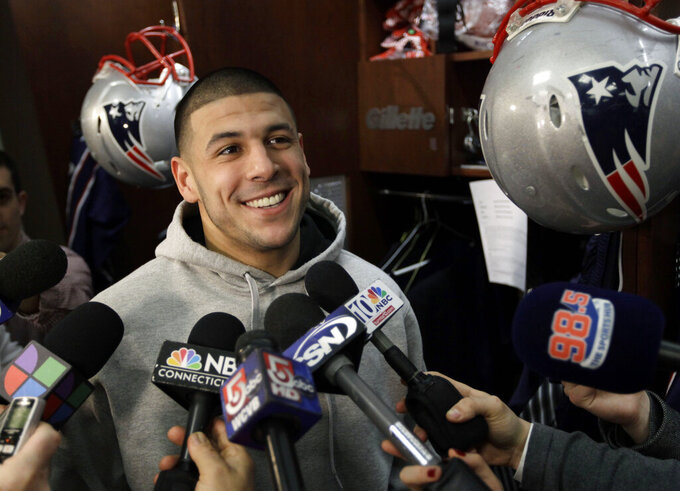 FILE - In this Jan. 26, 2012, file photo, New England Patriots tight end Aaron Hernandez speaks to reporters at his locker at the NFL football stadium in Foxborough, Mass. A federal judge says the 6-year-old daughter of deceased NFL player Aaron Hernandez missed a 2014 deadline to opt out of the $1 billion concussion settlement and can't separately sue the league over his CTE diagnosis. Yet Hernandez’s death in 2017 came too late for his family to seek compensation for CTE-related suicides under the class action settlement.   (AP Photo/Elise Amendola, File)

PHILADELPHIA (AP) — The 6-year-old daughter of the late NFL player Aaron Hernandez missed a 2014 deadline to opt out of the league's concussion settlement and can't separately pursue a $20 million suit over his diagnosis of a degenerative brain disease, a judge ruled.

Yet Hernandez's death in 2017 came too late for his family to seek up to $4 million in compensation for suicides related to chronic traumatic encephalopathy under the class action settlement.

Hernandez spent three years with the New England Patriots before his 2013 arrest on the first of three homicide charges. The Patriots terminated his $40 million contract, and he never returned to the NFL.

U.S. District Judge Anita Brody in Philadelphia — where lawsuits were consolidated alleging the NFL hid what it knew about the risks of concussion injuries — ruled Thursday that he was effectively retired and therefore, along with his family, bound by the class action settlement for NFL retirees.

Under terms of the concussion settlement, the judge said, "The crux of the issue is whether Hernandez was 'seeking active employment' as an NFL football player as of July 7, 2014. He was not. On this date, Hernandez had been imprisoned — without bail — for nearly a year."

Family lawyer Brad Sohn argued that Hernandez had not retired but hoped to be exonerated and return to the league. His daughter, Sohn said, should therefore be able to pursue her "loss of consortium" lawsuit in her home state of Massachusetts.

"No matter what anybody wants to say about Aaron Hernandez . she will have to live with the fact that she doesn't have a parent for the rest of her life," Sohn said Friday. "It remains our position that the NFL is responsible for the damages that she has because of his CTE."

Hernandez was convicted in the first homicide case in 2015 but acquitted of an unrelated double homicide in April 2017. He took his life days later in prison. His conviction was later overturned because he died before exhausting his appeals.

Doctors later found the 27-year-old Hernandez had advanced CTE on a level not previously seen in someone that young.

Sohn, in a brief in the case, called Hernandez "a generational talent" but said he "entered the NFL in 2010, even though (and amidst everyone's full knowledge that) he had been investigated for ties to a brutal 2007 shooting. The NFL paid no mind to this and let him play."

The daughter involved in the lawsuit is the child of Hernandez's fiancee, Shayanna Jenkins.

"A.H., a child, committed no crime nor asked to be born into such tragic circumstances," Sohn wrote.