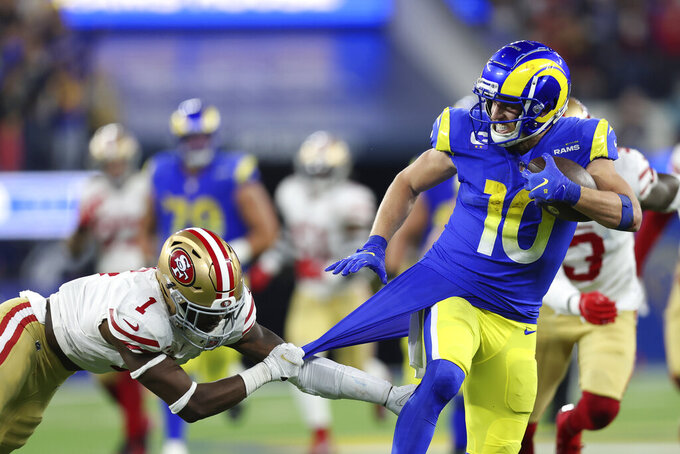 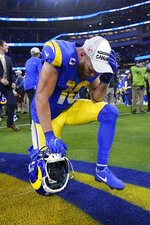 LOS ANGELES (AP) — The long days of rehabbing from a knee injury in 2018 wasn’t the most challenging thing Cooper Kupp had to go through.

It was missing the Super Bowl.

The Los Angeles Rams wide receiver was on the sideline three years ago in Atlanta when the Rams failed to score a touchdown in a 13-3 loss to New England.

“Missing that Super Bowl, that’s one of the hardest things I’ve been through,” Kupp said. “The conflict it creates in you when you are both cheering and pulling for your guys. You equally want them to succeed and do it, but also wanting to be there and knowing that you can’t be a part of it, like you want to at least. That’s a very difficult thing to go through.”

Kupp’s 2018 injury is one of the reasons he has emerged as one of the best pass catchers in the NFL going into Sunday’s matchup against the Cincinnati Bengals for the Lombardi Trophy.

Kupp, one of five players to be a unanimous first-team selection to the AP All-Pro team, is the first wide receiver since Steve Smith in 2005 and fourth overall to capture the receiving triple crown. He led the league with 145 receptions, 1,947 yards and 16 touchdowns.

While some players struggle coming back from an ACL injury, Kupp said he saw rehab as an opportunity to rebuild his game.

The one thing that Kupp has always excelled at is disguising his routes. According to the NFL’s Next Gen Stats, he is also the only player to have at least 200 yards and a touchdown on five different routes this season.

Kupp led the league with 296 yards on out-routes, was second in crossing routes (346 yards), and third on posts (258 yards). He also had more than 200 yards on go-and-hitch routes.

In explaining how he has disguised his routes, Kupp said he wasn’t about to give away all of his secrets, but the basic premise is trying to make everything look the same.

“Everything’s supposed to look like a go-ball, and then everything comes off of that,” he said. “There’s nuanced leverages to understanding where guy’s help is. There are times you might want to move a guy’s hips opposite. There are other times where a guy thinks he’s got you covered on things. Part of it is also learning when the timing is right for a lot of stuff that you want to do.”

Kupp excelled in his only previous meeting against the Bengals. He had a career-high 220 yards on seven receptions and a touchdown during a 2019 game in London. His 65-yard touchdown in the second quarter was the third-longest catch of his career.

One of Kupp’s most significant strengths this season has been gaining yards after the catch. According to TruMedia Networks, he led the league with 846 yards while the Bengals defense allows 121 yards per game after the catch, the 10th-highest rate in the league.

“He’s a terrific player, all the yards and catches that he has, you have to try to contain them. You try to do a good job of always knowing where he is, making sure we’re putting a body on him constantly,” Anarumo said. “I think you can hopefully manage the damage that they can do to you. He’s a terrific player, and they got a bunch of other ones too.”