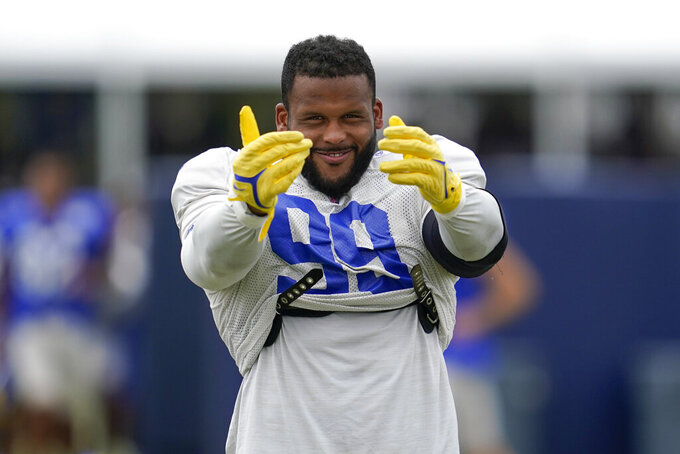 Strengths: Coach Sean McVay's offense rejoined the NFL elite during the Rams' championship season, with new quarterback Matthew Stafford fitting in almost seamlessly before leading a series of late-game comebacks down the stretch. Running back Cam Akers is healthy, and new receiver Allen Robinson is widely expected to be an upgrade opposite All-Pro Cooper Kupp. A couple of personnel changes on the line aside, McVay's offense appears to be loaded.

Weaknesses: The Rams' defense has thrived around Aaron Donald and Jalen Ramsey as its unparalleled cornerstones, but the supporting cast underwent significant changes yet again. The Rams' only playmaking addition to the secondary was the return of veteran cornerback Troy Hill, and David Long Jr. will get ample playing time and more responsibility as a cornerback. The Rams got better at linebacker with Bobby Wagner's arrival, but they'll soon find out if they got worse both at the back and up front with run-stopper Sebastian Joseph-Day's absence.

Camp Development: Long appears to be secure as a starting cornerback, while safety Nick Scott has built on his late-season surge to earn a prominent role. The right guard competition appeared to end quickly, with versatile veteran Coleman Shelton separating himself for the job.

Fantasy Player To Watch: While Kupp will be hard-pressed to equal his jaw-dropping stats in 2021, he seems likely to have another prolific season even if some of those throws are now headed for Robinson, who is about to play with the best quarterback of his nine-year NFL career while an innovative, offense-minded head coach calls the plays.

Expectations: A sequel is possible in Hollywood if the Rams can work through their defensive changes while remaining one of the NFL's top offensive teams. Luck and injuries will have something to do with it, but McVay appears to have the pieces in place to put the Rams in contention to be the NFL's first back-to-back champs since the 2004 season.