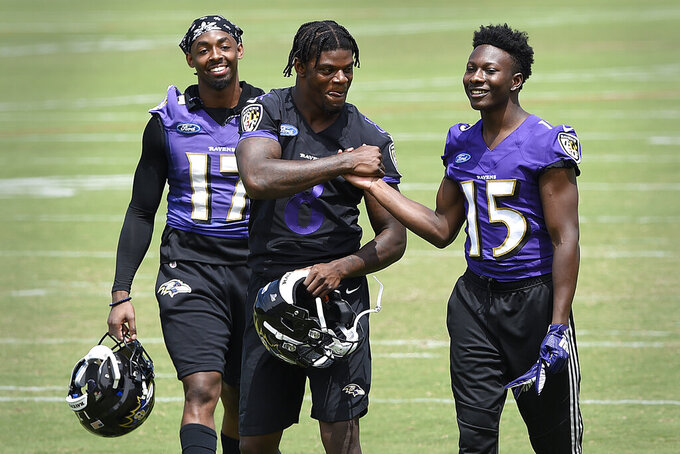 OWINGS MILLS, Md. (AP) — It's been a year since Lamar Jackson arrived at his first NFL minicamp, fully understanding that his stature as a former Heisman Trophy winner and first-round draft pick didn't guarantee a lick of playing time during the regular season.

Former Super Bowl MVP Joe Flacco was the Baltimore Ravens starting quarterback, so Jackson immediately settled into backup role while he got a handle on a brand of football that was unlike anything he had experienced before.

"I would say I was kind of startled just being in the league," Jackson recalled Wednesday. "Growing up, hearing all the things about when you go in the league, this and that is going to happen. Or the game is totally different, it's a lot faster."

Jackson was too quick, elusive and talented to be buried on the bench, so he was used periodically on Sundays until Nov. 18, when he started in place of an injured Flacco and started the Ravens on a 6-1 hot streak that enabled them to reach the postseason as AFC North champions.

Flash forward to this week, when a much more poised and confident Jackson led the offense during the three-day mandatory minicamp.

"Right now it's pretty calm to me," Jackson said. "Playing in those seven games being around my teammates, it's been pretty good."

Jackson performed so well last season that the Ravens traded Flacco and decided they would rewrite the playbook and build the entire team around a former University of Louisville star who has proven to be equally effective at the next level.

"You build around your players, nobody more so than your quarterback," coach John Harbaugh said. "You identify who your quarterback is going to be for the long term, which we've done, we need to build everything around what he can do. Offense, defense, even special teams are built with that in mind. What type of team are we going to be, based on the skill set of the quarterback?"

Baltimore intends to use the same philosophy that proved so successful a year ago. The offense relied heavily on the run, led by Jackson's impromptu downfield bursts. If a long drive didn't end in a touchdown, standout kicker Justin Tucker almost unfailingly slammed through a field goal.

The league's top-ranked defense did its share by making sure the Ravens would prevail in low-scoring games.

The expectation this year is that Baltimore will benefit from Jackson's experience.

Jackson's maturity was evident in the huddle this week.

There remains a measure of concern about Jackson's ability to throw from the pocket — he's surpassed 200 yards in only one game — but offensive coordinator Greg Roman is certain the 22-year-old will be flinging the ball with accurately and authority this season.

"Lamar is the kind of guy that, the more he does something, he's going to get better at it," Roman said.