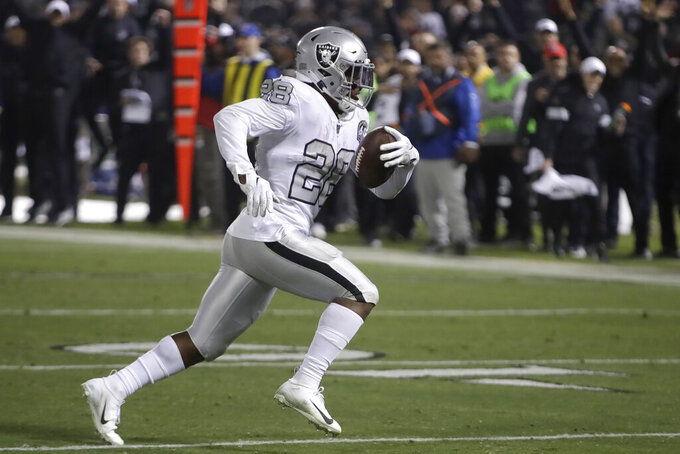 Oakland Raiders running back Josh Jacobs runs on the way to a touchdown against the Los Angeles Chargers during the second half of an NFL football game in Oakland, Calif., Thursday, Nov. 7, 2019. (AP Photo/Ben Margot)

ALAMEDA, Calif. (AP) — The success for the Oakland Raiders this season has been built mostly by an efficient offense that has moved the ball as well as almost anyone to help overcome a sometimes suspect defense.

When that formula wasn't working against the stingy Los Angeles Chargers defense, the Raiders went back to a formula that worked well in 2016, the only year they have made the playoffs since a Super Bowl loss following the 2002 season.

A late touchdown drive by Derek Carr and a key interception by Karl Joseph sealed the 26-24 victory over the Chargers on Thursday night that has put the Raiders squarely in the AFC playoff race.

With back-to-back wins in a five-day span featuring a late TD drive and a game-sealing defensive play by Joseph, the Raiders (5-4) are only a half-game out of the playoffs.

"I think so," Joseph said if these wins reminded him of the 2016 team that used plenty of late-game magic to win 12 games. "Just the resilience that we had to be able to come back, our team driving when we need to go score and our defense coming up with the stop. It definitely is."

The Raiders survived a 48-day stretch without a home game by winning twice in five games and now have back-to-back wins to open a three-game homestand.

With games against winless Cincinnati and the one-win New York Jets the next two weeks, the Raiders are in good position to be in contention heading into the final month of their final season in Oakland.

"This team is a lot better than what we get credit for, and I think you see that now," said Josh Jacobs, who scored the game-winning 18-yard TD. "I mean we're just starting to put the pieces together. So, it's going to be fun and interesting to see how we go on this little stretch and see how we do next week."

Comeback Carr. Carr completed five passes on the winning 75-yard drive before handing off to Jacobs for the final 18 yards on a TD run with 1:02 remaining. That gave Carr 18 fourth-quarter comebacks in his career, the most by any player in his first six seasons, according to Pro Football Reference. Carr also led a 92-yard comeback drive in London against the Bears last month and a 75-yard game-winning drive last week against Detroit.

Offensive line. The line had been the strength of the Raiders all season despite the five projected starters being on the field together for only 10 snaps before Thursday's game. Derek Carr was sacked three times after going down just twice in the previous five games and the Raiders were held to a season-low 78 yards on the ground.

DE Clelin Ferrell. The rookie had come under criticism for posting no sacks since the season opener and no consistent pressure despite being picked fourth overall in the draft. He stepped up in a big way against the Chargers by making 2 1/2 sacks for the most by a Raiders rookie since Anthony Smith had 2 1/2 against Seattle in 1991. He also had five quarterback pressures, according to NextGen stats, delivering his best performance yet.

"Clelin needed that," teammate Maxx Crosby said". A lot of people have been saying this or that, but it doesn't matter. Clelin came out, he balled out. Did what he's supposed to do. It was huge for us."

K Daniel Carlson. Carlson missed a field goal for the second straight week, giving him three misses this season after having only one last year for Oakland. But that miss from 53 yards wasn't nearly as bad as the missed extra point after Jacobs' go-ahead touchdown that kept the score at 26-24 and would have allowed the Chargers to win it with a field goal.

Defensive backs Lamarcus Joyner and Karl Joseph both got hurt on the final drive and there was no immediate word on the extent of the injuries. Joseph said his right knee buckled on his interception and he was on crutches after the game. Joyner left earlier on that drive with an undisclosed injury that coach Jon Gruden said he was concerned about.

10. While Ferrell delivered the sacks, another Raiders rookie pass rusher also had a big day. Crosby had 10 pressures, according to NextGen stats, the most by a Raiders player in three years. He forced two interceptions on those pressures and added a half-sack of his own.

The Raiders get a few extra days off before hosting the winless Bengals on Nov. 17.