The Latest: SEC championship game to have crowd of 16,500 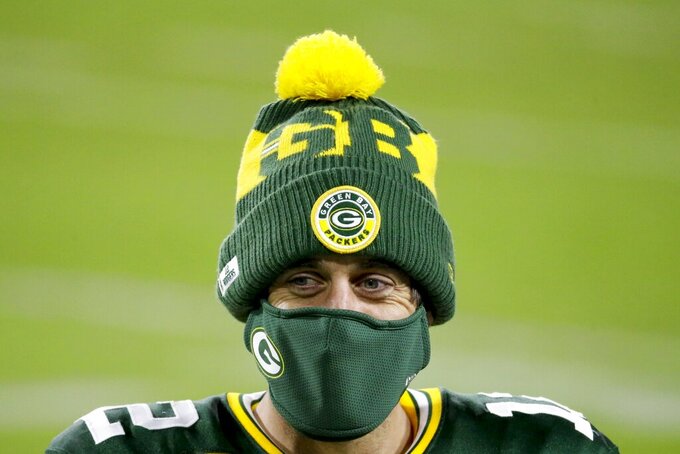 The Southeastern Conference championship game between No. 1 Alabama and No. 6 Florida will be played before a socially distanced crowd of 16,500 at Mercedes-Benz Stadium in Atlanta.

The game is set for Dec. 19 at the 75,000-seat, retractable-roof facility. All tickets have been sold, according to the SEC.

Face coverings must be worn inside the stadium at all times. Tailgating will be allowed up to five hours before the 8 p.m. kickoff, but one empty space must be maintained between each vehicle.

This will be the largest crowd to attend a football game at Mercedes-Benz Stadium since the pandemic began. The NFL’s Atlanta Falcons have been playing before a restricted capacity of less than 10,000 fans.

This will be the ninth time Alabama and Florida have met in the SEC title game, which has been played in Atlanta since 1994.

NFL chief medical officer Dr. Allen Sills says the Panthers’ COVID-19 transmission was linked back “to some gathering of players outside the team facility” during Carolina’s bye week. The Panthers placed eight players on the COVID-19/reserve list on Monday, forcing the team to close its facility for two days.

The NFL has worked with the club and the players involved and Sills said he thinks there will be improvement with repeated messaging about what players should and shouldn’t be doing away from the team’s facility.

The Panthers potentially face fines and a loss of a draft pick. The Las Vegas Raiders were fined $500,000, coach Jon Gruden was docked $150,000 and the team lost a sixth-round pick for its COVID-19 protocol violations in about a month ago following a repeat offense.

LSU has dropped out of the Holiday Hoopsgiving quadrupleheader set for Saturday at State Farm Arena in Atlanta.

Tournament organizers announced that Wofford would replace the Tigers, who withdrew from the event because of a possible COVID-19 exposure.

Wofford will now take on South Florida in the second of four games to be held throughout the day and evening at the home of the NBA’s Atlanta Hawks.

The other games are: Mississippi State vs. Dayton; Memphis vs. Auburn; and Clemson vs. Alabama.

The Colorado State men’s basketball team returned to a full squad practice Wednesday after a 20-day program pause because of coronavirus infections.

The Rams announced their game against Northern Colorado scheduled for Saturday will instead be played Feb. 16 at Moby Arena.

The Rams will tip off their season against CSU Pueblo on Saturday.

The schools announced the game Wednesday. The Tar Heels were originally scheduled to host Elon, but that game was put on hold after that program paused team activities due to a positive COVID-19 test.

UNC says it will work with Elon to reschedule that game for next season.

The UNC-N.C. Central game brings together two nearby programs, with the Tar Heels based in Chapel Hill and the Eagles of the Mid-Eastern Athletic Conference based in Durham about 20 minutes away.

The kickoff between Utah and No. 21 Colorado in Boulder, Colorado, has been moved to Saturday morning.

The game was originally scheduled for Friday night. It was moved to take the place of the Michigan-Ohio State game, which was canceled due to COVID-19 issues within the Wolverines’ program. The Utah-Colorado game will start at 12:05 p.m. EST.

Colorado said in a release this will be the earliest kickoff time in Folsom Field’s 97-year history. The previous mark was set when Nebraska and Colorado began at 12:09 p.m. on Nov. 23, 2007.

The Miami Dolphins have placed cornerback Jamal Perry on the reserve-COVID-19 list.

Perry has played in 10 games with one start this season.

The University of Wyoming has banned new ticket sales to home sporting events until at least 2021 as new statewide public health orders were put in place by Republican Gov. Mark Gordon.

The university says no new tickets will be sold starting Wednesday until at least Jan. 8. Fans who bought tickets before 12 p.m. Tuesday for two upcoming home games scheduled this week will still be allowed to attend.

The new state orders were in response to the recent spike in statewide new coronavirus cases. The state reported 128 deaths from the disease in November, the most in a month since the pandemic began.

Charleston Southern has paused its men’s basketball program and postponed its next two games, including a Saturday trip to No. 10 Duke due to a positive COVID-19 test.

The school said Wednesday that a non-player tested positive and was immediately isolated.

Charleston Southern coach Barclay Radebaugh said while the team was disappointed at missing out on games, the safety of players and staffers was the priority.

UConn has postponed a second men’s basketball game as it continues to deal with a player’s positive coronavirus test.

The Big East Conference announced the Huskies will not travel to face Georgetown on Sunday. Georgetown now will host St. John’s on Sunday instead of UConn.

The Huskies had already had postponed its planned Big East opener against St. John’s on Friday in Storrs after suspending team activities on Sunday.

UConn (3-0), which is returning to the Big East after seven years in the American Athletic Conference, is now scheduled to open conference play on Thursday, Dec. 17, at Providence.

This is the second coronavirus-related shutdown for the Huskies. They spent 14 days on pause in November after a positive coronavirus test result.

Indiana and Purdue have canceled Saturday’s football game because of an increase in COVID-19 cases at each school.

It’s the first time since 1919 that the annual in-state rivalry will not be played.

“We’re certainly disappointed that we had to cancel the Old Oaken Bucket game,” they said in a joint statement, referring to the trophy that goes to the winner. “We both understand the history and tradition of one of the best rivalries in college football, but the safety and well-being of our student-athletes, coaches and staff is our primary priority. We will continue to monitor the situation on both campuses and listen to the advice of our medical professionals.”

Indiana will keep the trophy for another year after winning last year’s game in overtime. The Hoosiers (6-1) had already clinched the No. 2 seed in the Big Ten East. Purdue (2-4) has lost four in a row.

Andrea Lee has withdrawn from the U.S. Women’s Open after testing positive for the coronavirus.

Lee tested negative in a pre-arrival test by the USGA last week in Dallas while playing an LPGA Tour event. She traveled to Houston and tested positive, with mild symptoms.

The U.S. Women’s Open, the final golf major of the year, starts Thursday. Lee, who is eligible for next week’s CME Group Tour Championship, was replaced by Ayaka Watanabe of Japan.

Marshall says Friday’s regular-season football finale against Charlotte has been canceled due to injuries and a lack of available Thundering Herd players at key positions, which it attributed to COVID-19 issues.

“Due to the developments this week, myself and our medical team felt that it was unsafe to put the team on the field Friday evening,” Marshall athletic director Mike Hamrick said in a statement.

Butler has postponed Monday’s men’s basketball game against St. John’s and will now open its Big East season on Dec. 16 at No. 9 Villanova.

The Bulldogs (1-0) haven’t played since Nov. 25 after a Tier 1 member of the program tested positive for COVID-19. Anyone deemed a close contact to that person was instructed to quarantine for 14 days.

School officials announced the next day that all team activities had been paused.

Washington has paused football activities after a rise in positive COVID-19 cases within the Huskies' program, putting in doubt the fate of its game this Saturday against Oregon.

Washington did not reveal the number of cases but said it would not practice Wednesday while undergoing additional PCR testing.

The school said it would announce the status of the Oregon game when more information becomes available. Should the game be played, the winner of the Washington-Oregon matchup will be Pac-12 North champions and play in the conference title game on Dec. 18.

The school announced the move Wednesday. That comes after the Wolfpack had to cancel a “Bubbleville” game against Connecticut in the Huskies’ home state last weekend as well as postpone Tuesday’s trip to Michigan for the ACC/Big Ten Challenge.

Because of the pause, N.C. State’s scheduled game against Florida Atlantic this weekend won’t be played. The schedule beyond that game is unclear.

At the time of the UConn cancellation, N.C. State said all program members had tested negative before traveling to Connecticut to face Massachusetts-Lowell and again after their arrival. But a subsequent test came back positive the day before the matchup with the Huskies.

N.C. State’s announcement says there have been two members of the traveling party who have tested positive.

The Atlantic Coast Conference says it will allow limited fans to attend its football championship game between No. 2 Notre Dame and No. 4 Clemson on Dec. 19.

The state of North Carolina previously issued public-gathering restrictions for outdoor venues because of the coronavirus pandemic, allowing schools to fill 7% of their stadium capacity for fans. Following that guidance, the ACC said Wednesday that capacity would be set at 5,240 for Bank of America Stadium in Charlotte.

The league says fans and staff must wear masks in the stadium and follow social-distancing markers displayed throughout the stadium.

The Green Bay Packers will limit attendance at Lambeau Field games to team employees and their families for the remainder of the regular season.

The team says the decision is based on a continued high rate of coronavirus activity in Brown County and many areas of the state. The team is also concerned rates may spike with the holiday season approaching.

Packers president and CEO Mark Murphy says “the health and safety of our community, players and fans is our top priority.”

WLUK-TV has reported that the Packers allowed a limited group of about 500 employees and their families during their last two home games on Nov. 29 and last Sunday.

The Packers have two regular season home games remaining. They face the Carolina Panthers on Dec. 19 and the Tennessee Titans on Dec. 27.

The team says an approach to any potential home playoff games will be decided at a later date.