League loses its star, yet Brady's legacy lives on in NFL 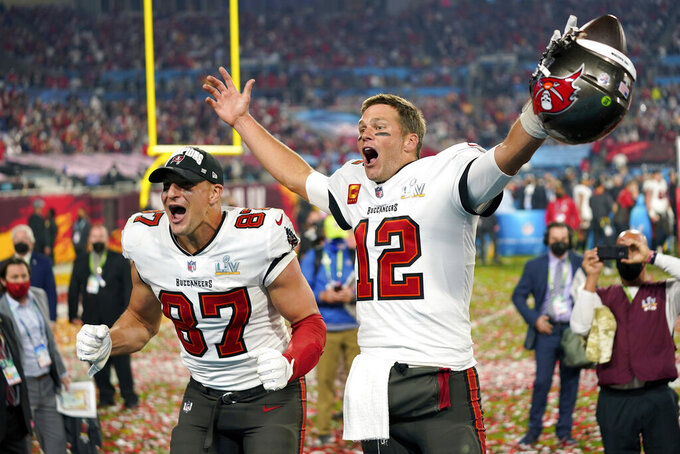 With Brady deciding to focus on his family instead of football, the league loses a giant who flourished in a perfect storm of rules changes designed to protect passers, an increased focus on nutrition and personal offseason training and a dogged determination to thwart both logic and time.

Brady only got better with age and redefined greatness in an unparalleled career that seemed like it might go on forever.

And yet, it some ways he's not leaving us at all.

You'll see his imprint on the NFL whenever you tune into a football game, beginning with the Super Bowl on Feb. 13.

“And I guarantee you these young guys, they all admired something in Tom Brady that they attempted to put into their own game," said Brady's former teammate and cornerback Aqib Talib. "Whether it was his throwing motion, his competitiveness or how he took care of his body, some aspect of their game has something to do with Tom Brady.

"If you're an NFL quarterback anywhere from 20 to 30 years old right now, man you got a piece of Tom Brady in you, guaranteed.”

That's why “the NFL is itself is going to be fine," concurred Hall of Famer Champ Bailey, whose 100-yard interception return handed Brady his first loss in 11 playoff games back in 2006.

“But I think what we’re gonna miss is that level of consistency, professionalism, and nobody did it better," Bailey said. “I think a lot has to do with how he was raised. You know, it was him as a kid, his mindset, being around Bill Belichick and his mindset.

"And it’s crazy how he had an MVP season and he's retiring. It’s almost like Kobe hitting 60 and going out.”

The last NFL player born in the 1970s went out on top — he's the defending Super Bowl champion until the Bengals or Rams hoist the Lombardi Trophy in two weeks.

Just think, Brady could already have a bust in Canton had he retired in his late 30s like his chief rival Peyton Manning did. But Brady went 70-24 in his 40s, winning his sixth Super Bowl with the Patriots and seventh one with the Buccaneers.

While the young quarterbacks try to forge their own legacy with Brady no longer in their way, it's a safe bet none will come close to his seven Super Bowl rings because there are so many good quarterbacks in his wake.

“I really do believe he's above the standard,” Bailey said. "I don't see how a quarterback in the future would be more accomplished than he is. But the NFL will be fine. We got some great young talent and I'm sure Tom Brady would even say it himself. That divisional round was an unbelievable weekend of football.

“And it just goes to show you the quarterback talent is still there and probably even better than before," Bailey said. "And the funny thing is these guys all grew up watching Tom Brady. If these dudes do half of what he did it's a tremendous career."

It's not like it was all give and no take with Brady, who also took something from the vanguard of young quarterbacks coming into the league the last few years.

He embraced social media and endorsement opportunities he shunned earlier in his career, showing the public a softer, humorous, often sarcastic side that endeared him to millions who had always associated him with the scowling Belichick.

He became more beloved across the league much like Manning had in the twilight of his career that featured an epic 17 matchups with Brady.

“I think everybody enjoyed the old Tom Brady more than the young one,” Bailey said. "What he did toward the end of his career was he engaged his fans. I think that's what was missing from a young Tom Brady. He was in this box and he never really came out.

“Now, I think that made him who he was, but his engagement level with fans increased 1 million percent in the past few years. And people really got to know him, saw he was hilarious at times. People appreciate you more when they can see you relaxed and having a good time.”

Like when he tossed the Lombardi Trophy from one boat to another boat in the Bucs' Super Bowl celebration last year.

“If you wanted to create the ultimate football player, you would create him just like Tom Brady.”