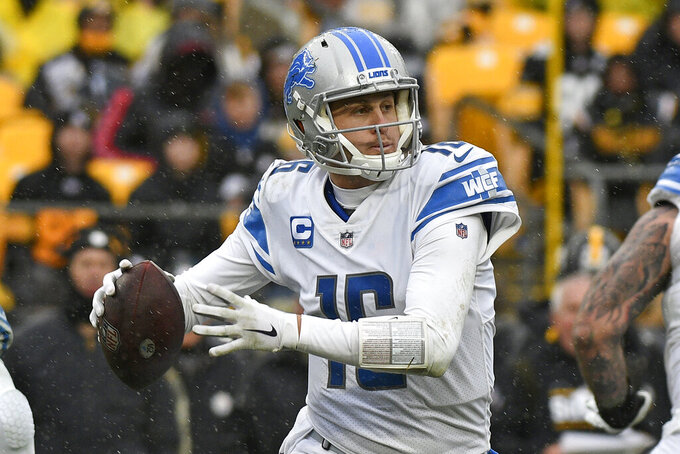 Detroit Lions quarterback Jared Goff (16) looks to pass during the second half of an NFL football game against the Pittsburgh Steelers in Pittsburgh, Sunday, Nov. 14, 2021. (AP Photo/Don Wright)

ALLEN PARK, Mich. (AP) — Detroit Lions quarterback Jared Goff missed a third straight practice with an oblique injury and is listed as doubtful to play against the Cleveland Browns.

Tim Boyle is expected to make his first career start Sunday in Cleveland.

“Opportunities, especially in the NFL, come very few times unfortunately, but that’s the beauty of the NFL," Boyle said Friday. “It’s so competitive. It’s been a long journey, just kind of reminiscing on my story of starting football when I was 6 years old and here I am as a 27-year-old still blessed to have this opportunity, it really is.

“It’s about preparation and always staying ready. I’ll be ready to go.”

Goff was hurt in the winless Lions' tie last Sunday at Pittsburgh.

The Lions signed Boyle to a one-year contract in free agency to back up Goff. Boyle, who spent the previous three years behind Aaron Rodgers in Green Bay, went on injured reserve after breaking a thumb in the preseason. He returned to practice last week.

Browns defensive end Myles Garrett acknowledged he did not know much about Boyle.

“I have to do my research," Garrett said. “I wasn’t sure if Goff was going to play, so now get to it. Still got a lot of time for film study."

The Lions will likely ask Boyle to hand the ball off many times to running back D'Andre Swift.

“They’re not going to try and let (Boyle) put the game in his hands," Garrett said. “They’ll try and run the ball. They had success with that last week. So we’ve got to force their hand, where if they can’t run the ball well, he’s got to make plays and then see what we can do."

Detroit's backup quarterback becomes David Blough. His NFL career began in Cleveland when the Browns signed him as an undrafted rookie out of Purdue. The Lions acquired Blough in a trade at the conclusion of his rookie training camp. He has started five games for the Lions over the past two seasons, going 0-5 as Blough completed 54% of his passes for four touchdowns and six interceptions.