Manning and Lynch join together for a 3rd career highlight 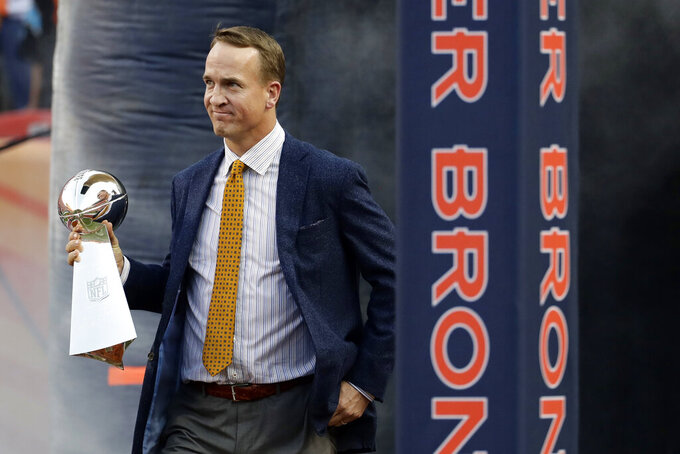 FILE - Former Denver Broncos quarterback Peyton Manning carries the Vince Lombardi Trophy from Super Bowl 50 onto the field prior to an NFL football game against the Carolina Panthers in Denver, in this Thursday, Sept. 8, 2016, file photo. Manning was selected Saturday, Feb. 6, 2021, for induction into the Pro Football Hall of Fame's Class of 2021. (AP Photo/Jack Dempsey, File)

Close friends Manning and Lynch, who joke about drinking Mai Tai cocktails together at Pro Bowls in Hawaii and then charging them to hotel rooms of other players, are members of the Pro Football Hall of Fame's class of 2021. The star quarterback and safety reminisced about their relationship and entering the Canton, Ohio, shrine together hours after the latest group of inductees was revealed.

Joining them for the August enshrinements will be Charles Woodson, Calvin Johnson and Alan Faneca among modern-day players, plus senior candidate Drew Pearson, coach Tom Flores and contributor Bill Nunn.

“Those friendships and relationships don’t go away when you stop playing football,” said Manning, the only five-time league MVP and a two-time Super Bowl champion, once with the Indianapolis Colts and then with the Denver Broncos. “The fact we received this news the very same year, I am very honored.”

Added Lynch, who waited nine years to be voted into the hall: "His passion for the game is what linked us, and then we started sharing a lot of things, our families, everybody got to know each other.

“Peyton has become a tremendous friend and a guy I rely on for advice when I am making decisions,” said Lynch, now general manager of the San Francisco 49ers. “It is an honor to go in with him for sure.”

What they are entering, as described by former defensive back Woodson — like Manning and Faneca a member of the All-Decade Team of the 2000s — is everlasting.

“This marks the end of what I did as a player for 18 years in the NFL and what I did through high school and college,” Woodson explained. “I feel like this means I am going to live forever. This is the ultimate that one player could ever achieve after their playing days are over.”

Like Pearson, Flores and Lynch, Faneca had a lengthy wait. A strong group of offensive linemen became eligible, and in the last two years Kevin Mawae and Steve Hutchinson were selected. Now in his sixth try, Faneca is in.

“It's not the greatest to have to wait, but it is all the same. We get to share it,” said Faneca, who played 13 NFL seasons and won a Super Bowl with the Pittsburgh Steelers. “It's strange to even throw it out there to say it — it is immortality. That bust will be there for 40,000 years. I can’t even imagine that.”

Manning, Johnson and Woodson didn't have to wait, of course. There was even a major break from tradition in how they were told of their selection by Hall of Fame President David Baker.

Usually, Baker would knock on the new inductee's hotel room door. During the pandemic, Baker instead traveled to the houses of the four modern-day players and Flores, and he surprised Manning at the Broncos' stadium.

“Loudest knock I have ever heard and maybe the best knock,” Lynch said.

“Thirty years of coaching that flashed right in front of me," Manning added. "Kind of tough, they tell you this great news: ‘You can’t tell anyone for two weeks.'”

Flores is the first Hispanic American coach in the hall.

“It is a real honor, a compliment to have people show you that they feel you did a good job,” Flores said. “As people look back on it, you did well and you were one of the best. The fact the Hispanic race has embraced this, they love the Raiders ... it never was an issue until when we went to LA and the communities there embraced me and they embraced the Raiders. It gives you some pride and it gives you a purpose in life that you can be a leader, be an example ... of what can be done regardless of who you are or where you come from.”

He referenced one of his predecessors with the Raiders who is enshrined in Canton, John Madden.

“As John Madden has said: ‘All our busts will be talking to each other for many years to come.'”

The late Nunn, at first a journalist in Pittsburgh and then a scout for the Steelers, mined the historically Black colleges and universities for talent. He was directly responsible for finding four members of the Steel Curtain teams that won four Super Bowls.

Johnson, a member of the 2010 NFL All-Decade Team, summed up the experience for all of the class of 2021.

“To be a member of this excellent fraternity, the guys I grew up watching, to be alongside the guys I emulated my game after,” Johnson said. "I can only imagine all the great stories to be told. Just to be with the best in the game is truly an honor.”