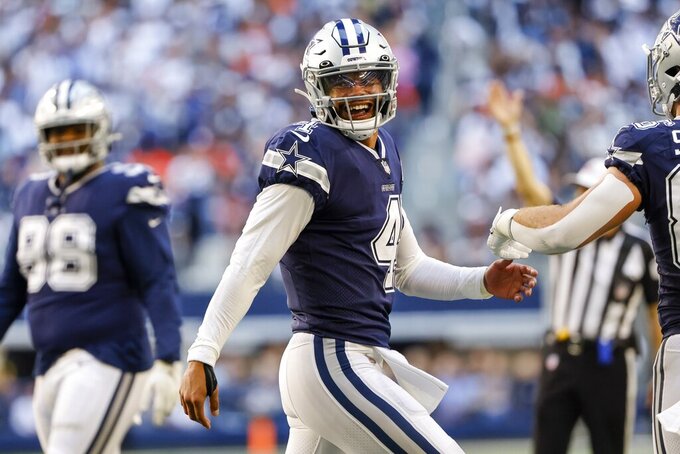 Dallas Cowboys' Dak Prescott reacts after teammate Tony Pollard runs for a touchdown during the first half of an NFL football game against the Chicago Bears Sunday, Oct. 30, 2022, in Arlington, Texas. (AP Photo/Ron Jenkins)

LAST WEEK: Cowboys were off last week after beating Chicago Bears 49-29 at home on Oct. 30; Packers lost 15-9 at Detroit

TURNOVER DIFFERENTIAL: Cowboys plus-6; Packers minus-5

COWBOYS PLAYER TO WATCH: This is the first road game of the season for QB Dak Prescott, who missed five games after breaking the thumb on his throwing hand in a season-opening loss to Tampa Bay. He’s 24-18 on the road with 12 game-winning drives, second in the NFL since entering the league in 2016. Dallas was 4-1 without Prescott, but the offense struggled. Its best showing of the season came in Prescott’s second game back against the Bears before the bye.

PACKERS PLAYER TO WATCH: QB Aaron Rodgers matched a career high with three interceptions at Detroit, with two of them coming in goal-to-go situations. The four-time MVP will try to make amends Sunday as he tries to beat Cowboys coach Mike McCarthy, who coached the Packers’ during the 2010 season when Rodgers won his lone Super Bowl title.

KEY MATCHUP: Cowboys RBs Ezekiel Elliott and Tony Pollard vs. Packers run defense. Elliott practiced on a limited basis Wednesday and is questionable for Sunday's game. Elliott is hoping to play for the first time since Oct. 23 as he recovers from a knee injury. Pollard stepped in for Elliott and rushed for 131 yards and three touchdowns against the Bears. The Cowboys should feel confident they can run the ball against a Green Bay defense allowing 4.8 yards per carry to rank 24th.

SERIES NOTES: The Packers have won eight of the past nine meetings. That run includes two NFC divisional playoff victories, a 26-21 triumph at Lambeau Field in the 2014 season and a 34-32 road victory in the 2016 season. The only Dallas victory in that stretch was during the 2016 regular season, a 30-16 win at Green Bay in which Prescott threw for three touchdowns and Elliott ran for 157 yards, 2 off his career high. This is the first time Matt LaFleur and McCarthy have faced off as head coaches. McCarthy went 125-77-2 in 13 seasons as Green Bay’s coach before getting fired in 2018.

STATS AND STUFF: McCarthy returns to Green Bay, where he led the Packers to the Super Bowl to finish the 2010 season. They won the title at the home of the Cowboys. McCarthy was fired during the 2018 season and hired by Dallas in 2020. Green Bay is the only team McCarthy hasn’t faced. A win would give him at least one regular-season victory against every team except Pittsburgh, the team he beat in the Super Bowl. McCarthy’s next regular-season victory will be No. 150, moving him past Bill Cowher for 23rd on the career list. ... The Cowboys have allowed at least 200 net passing yards just once this season. Rodgers has averaged 261 yards in 10 games against Dallas with 16 touchdowns and two interceptions. His record as a starter against the Cowboys is 7-2. ... Elliott has 72 touchdowns and needs one to pass tight end Jason Witten for fifth on the club’s career list. ... Cowboys WR CeeDee Lamb needs five catches to become the fastest to reach 200 catches in franchise history (41 games). ... The Packers have committed 25 penalties over their past three games. ... Green Bay is trying to avoid its first six-game losing streak since 1988. ... This is the Packers’ first home game since a 27-10 loss to the New York Jets on Oct. 16. They’ve been on the road for the past three weeks. ... In two career games against the Cowboys, Packers RB Aaron Jones has totaled 38 carries for 232 yards and five TDs plus eight catches for 84 yards. ... Packers WR Allen Lazard has five TD catches this season despite missing two games because of injury. ... These are the top two teams in regular-season winning percentage in NFL history (.573 for Dallas to .572 for Green Bay).

FANTASY TIP: Elliott’s status is worth monitoring this week to determine whether he or Pollard will get the majority of the Cowboys’ carries Sunday. Whichever player emerges as the lead back should have a productive day against Green Bay’s suspect run defense.