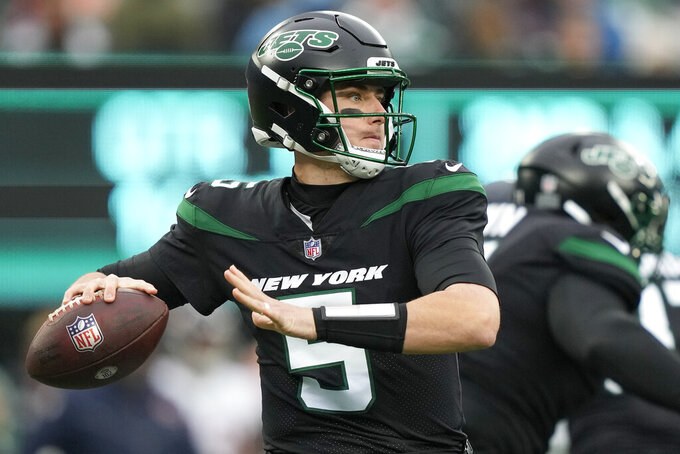 Mike White is the present for the New York Jets. And maybe even the future.

Sure, overreactions are part of the playbook on Mondays during the NFL season. But this might not qualify as such.

Not when you have the type of performance White had at quarterback in a 31-10 victory over the Chicago Bears on Sunday in place of a benched Zach Wilson.

In his first start since last season, White was 22 of 28 for 315 yards with three touchdowns, no interceptions and a near-perfect 149.3 quarterback rating. He brought energy to the field and the stands, where rain-soaked Jets fans chanted his name throughout the game.

More importantly, White knows how to operate this offense: efficiently and effectively.

“I think he’s a baller, obviously,” tight end Tyler Conklin said. “I just really appreciate the way he works. He’s an even kid. Never gets too high, never gets too low. I just think that’s huge for a quarterback.”

White's performance Sunday — even against a banged-up and depleted Bears defense — was everything the Jets have been hoping to see from Wilson since they drafted him with the No. 2 overall pick last year.

But Wilson has stumbled in his opportunities, showing only flashes of the playmaker they drooled over at his pro day at BYU. There has been more bad than good, with Wilson failing to consistently make even the most basic of plays.

And this comment from Saleh on Sunday said it all about White: “He made the easy look easy."

White had good touch on his passes, despite the rainy conditions. He also got the ball out of his hand quickly, showing decisiveness. He spread the ball around, connecting with 10 receivers.

It was reminiscent of the performance that got his jersey displayed in the Pro Football Hall of Fame after a dominant performance in his first NFL start last October. It's a small sample size, of course, but he looked like a completely different quarterback from the one everyone saw in his last regular-season game when he threw four interceptions against Buffalo last year.

“You’ve got to learn from your lows,” White said, “and build upon that and just keep playing smart, winning football.”

The Jets are a surprising 7-4 and Saleh's move last week sent the message this season is now about more than just developing Wilson. It's about winning.

And White gives them the best chance to do so right now.

Could Wilson still be the future for the Jets? Maybe. Saleh insists the quarterback situation remains week to week and New York intends for Wilson to play again after he works through what the coach has called a “reset.”

Things change in a hurry in the NFL, but White has a chance to make the Jets consider maybe he has been that guy all along.

Third-down efficiency. Extending drives on offense has been troublesome for Mike LaFleur's unit all season. With White leading the way, New York was 7 of 12 on third down against the Bears.

Tackling. It was a wet, soggy and slippery day at MetLife Stadium, but the defense had several missed tackles, particularly in the first half when the Bears scored all their points on their first two drives. Things got better in the second half, but the Jets need to improve on wrapping up ball carriers if they want to go from being an excellent defense to elite.

RB Zonovan Knight. With James Robinson inactive and Michael Carter injured during the game, the undrafted rookie out of North Carolina State nicknamed “Bam” sparkled with 69 yards on 14 carries and three catches for 34 yards. It was the most yards rushing by a Jets player in his debut since Matt Snell had 82 in 1964.

Robinson. The Jets acquired him from Jacksonville last month after a season-ending injury to Breece Hall, and he had minimal impact — 75 yards on 25 carries in three games — before being among the inactives Sunday.

“He's still learning our system,” Saleh said after the game. “There are still things he is getting comfortable with. No one has seen the last of him.”

Saleh said Carter has a low-ankle sprain and will be evaluated throughout the week but has a chance to play Sunday. Same for RT Cedric Ogbuehi (groin), S Ashtyn Davis (hamstring) and LB Chazz Surratt (hamstring).

466 — The Jets' total yards — 308 passing, 158 rushing — were their most since getting 486 in Week 9 at Indianapolis last season. White started that game but was injured early. The performance Sunday also marked the first time New York had 300 or more yards passing and 150 or more yards rushing since doing so in Week 13 vs. Kansas City in 2017.

The Jets face a stiff test by going on the road against the 9-2 Minnesota Vikings, who should be well-rested after beating Buffalo on Thanksgiving. It's a meaningful game in December, a rarity in recent seasons for the Jets, who have missed the playoffs an NFL-worst 11 straight years.