Mistakes around goal line costly to Panthers in loss 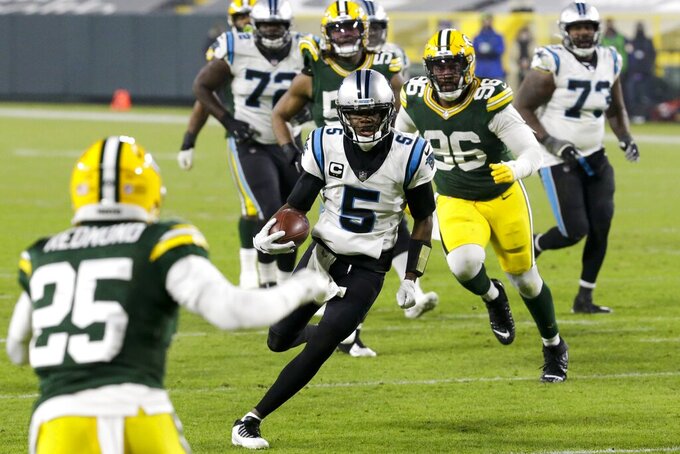 Carolina Panthers' Teddy Bridgewater runs for a touchdown during the second half of an NFL football game against the Green Bay Packers Saturday, Dec. 19, 2020, in Green Bay, Wis. (AP Photo/Mike Roemer)

GREEN BAY, Wis. (AP) — Mistakes around the goal line resulted in one more frustratingly close loss for the Carolina Panthers.

Carolina fumbled on first-and-goal from the 1 and committed a holding penalty that nullified a potential touchdown in a 24-16 loss to the Green Bay Packers on Saturday night.

“It’s always disappointing when you get down there and you have points, and you do something like that to prevent your team from scoring,” Panthers quarterback Teddy Bridgewater said.

The Panthers (4-10) have lost eight of their last nine games because of their inability to finish. In eight of their losses this season, they had the ball late in the fourth quarter with a chance to win or send the game into overtime.

That continued Saturday, as Carolina got the ball on its own 20-yard line with 55 seconds left but lost the ball on downs. A holding penalty on the punt return and an intentional grounding penalty on first down never gave the Panthers much of a chance on that final series.

But finishing the game wasn’t the problem Saturday. Carolina outscored Green Bay 13-3 and outgained the Packers 214-49 in the second half after allowing touchdowns on each of the Packers’ first three series.

The Panthers hung tough against one of the NFL’s top teams while playing without injured 2019 All-Pro running back Christian McCaffrey and left tackle Russell Okung.

“The way we came out in the second half, it was completely different,” Panthers defensive end Brian Burns said. “I don’t know what clicked in everybody’s head, but we just came out with a different mentality. But I feel like we’ve got a good defense now. If we cut out these small errors, I feel like we can be great.”

The Panthers’ issue was finishing drives.

Carolina trailed 14-3 in the second quarter but had first-and-goal at the 1 when Bridgewater tried leaping over the line for a touchdown. The plan backfired when Krys Barnes knocked the ball loose.

Cornerback Kevin King picked the ball up and raced 48 yards before D.J. Moore finally brought him down.

Bridgewater blamed himself for trying to reach the ball across the goal line, making him vulnerable to a fumble.

“I guarantee you, if I ever have to run a quarterback sneak again for the rest of my career, I’ll probably make sure I never reach the ball over the top, unless it’s fourth-and-1,” Bridgewater said.

That turnover eventually led to a 14-point swing, as Aaron Jones capped the Packers’ ensuing drive by high-stepping untouched for an 8-yard touchdown run around the left end.

“You talk about a dramatic shift,” Panthers coach Matt Rhule said. "Had he done that on fourth down, I could live with it, right? But just not on first down, especially when I thought we ran the ball well when we did run it tonight. That’s a principle of our team — we don’t reach the ball across the goal line until fourth down.”

Carolina crept back into the game and trailed 21-10 in the fourth quarter when Bridgewater once again fumbled inside the 5-yard line. This time, tight end Ian Thomas pounced on the ball in the end zone for an apparent touchdown.

But the touchdown was nullified by a holding penalty on John Miller. The Panthers had to settle for a Joey Slye 22-yard field goal that made it 21-13 with 8:39 left. They never could cut the margin below eight points.

This is the second straight year Carolina has struggled around the end zone at Green Bay (11-3).

Carolina also fell 24-16 at Lambeau Field last season. The Panthers owned a 5-3 record last year before losing to the Packers when McCaffrey got stopped short of the goal line as time expired. That defeat started an eight-game losing streak that ended Carolina’s 2019 season.

That 2019 trip to Green Bay opened a 22-game stretch in which the Panthers have gone 4-18. But the performance of Carolina’s defense Saturday night at least offered the Panthers something on which they can build.

“You hate these losses,” Rhule said. “But if there’s a message, it’s like if we just do what we’re supposed to do, we’re a pretty good team.”