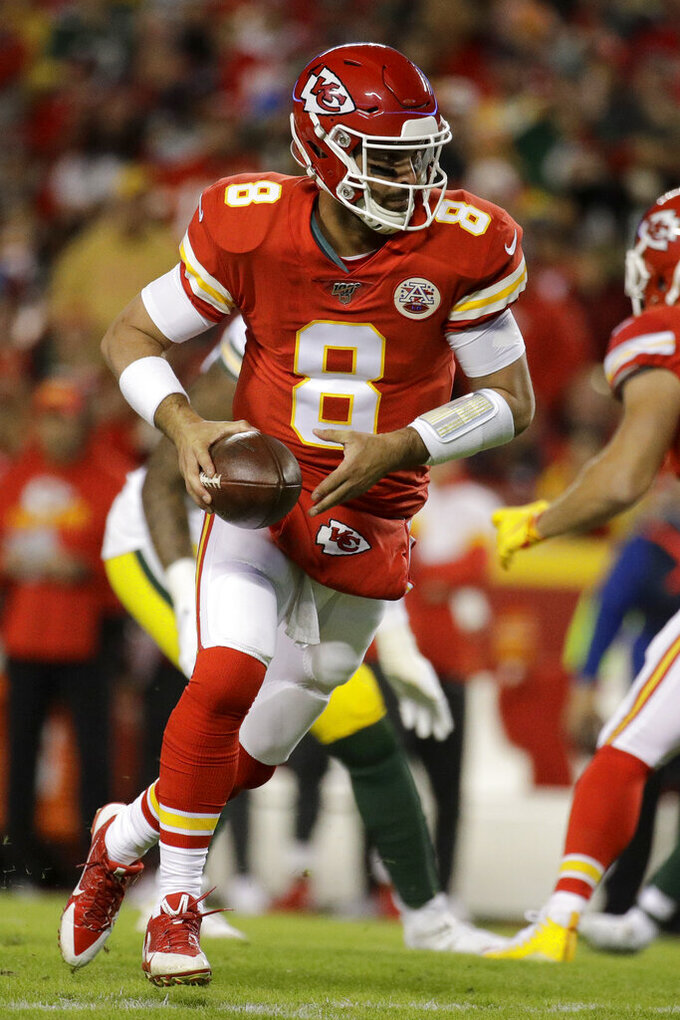 Kansas City Chiefs quarterback Matt Moore (8) prepares to hand off the ball during the first half of an NFL football game against the Green Bay Packers in Kansas City, Mo., Sunday, Oct. 27, 2019. (AP Photo/Charlie Riedel)

KANSAS CITY, Mo. (AP) — Matt Moore did everything the Kansas City Chiefs asked of him but win the game.

With league MVP Patrick Mahomes still rehabbing a dislocated kneecap, the backup quarterback stepped under the bright lights Sunday night and put on a show. Moore threw for 267 yards and two touchdowns without an interception against Green Bay, keeping his team in the game until the final minutes.

The Packers held on for a 31-24 victory. Moore never made it easy.

"I thought he did some good things," Chiefs coach Andy Reid said. "He hasn't played a lot of football the last couple of years. For him to come out and do what he did tonight, I thought that was respectable. He battled, made some plays for us. He did a respectable job."

Indeed, Moore's performance in a pressure-cooker situation was even more impressive given the fact that he was coaching high school football two months ago. His career had fizzled after stretches in Carolina and Miami, and he spent last year away from the game when no teams called him.

Moore had come to terms with his retirement as a player, spending time earlier this year as a scout for the Dolphins before working as a volunteer high school coach. And that's where he was when Chiefs backup Chad Henne broke his ankle in their third preseason game.

They quickly dialed Moore, he spent the night mulling the opportunity, then was on a flight to Kansas City to become the backup to arguably the most talented quarterback in the NFL.

"I hadn't seen him in a full game — not even a preseason game — other than watching him on tape," Reid said. "But he's a sharp guy. He's tough. And he's going to battle you."

Mahomes hurt his knee on a seemingly innocent sneak against Denver, and Moore showed plenty of rust in finishing off the game. He still appeared nervous at the start Sunday night, misfiring on three of his first five passes as the Chiefs twice went three-and-out.

The Packers jumped out to a 14-0 lead and the situation appeared dire.

But with Mahomes cheering him from the sideline, Moore finally settled down. He led an 89-yard scoring drive that ended with a 29-yard throw to Travis Kelce, then threw an en vogue push-pass that speedster Mecole Hardman turned into a tying 30-yard touchdown reception.

"There was a little bit of nerves," Moore said. "It's natural. But I got out there and we got it going and we were playing clean football for a while."

By the time halftime came around, Kansas City had taken a 17-14 lead.

"Obviously, it didn't start out too well," right tackle Mitchell Schwartz said, "but coming back from being down a couple scores and tying it up and taking the lead, that's awesome. That's what you want out of that guy."

Moore and the Chiefs' potent offense didn't get many chances in the second half.

They didn't take advantage of those they got, either.

Their first drive ended when Moore was sacked on third down, and their second ended when LeSean McCoy coughed up the ball on the very first play. The Packers responded by scoring touchdowns on each of their first three series, giving them a 31-24 advantage with just more than eight minutes to play.

The Chiefs began to drive again, and Moore connected with Kelce to convert third-and-8 at their own 24-yard line. But he misfired on third-and-3 a few minutes later, and Reid elected to punt away rather than gamble in his own territory in the hopes that his defense could get the ball back.

"It was a phenomenal punt, backed them up, our defense had been playing well throughout the night," Reid said. "If we get the ball back, good field position — listen, it didn't work out. It could be questioned either way. I chose to do what I did there, thought it was the right thing to do at that time and it didn't pay off the way I was hoping."

Moore certainly did, though. Regardless of whether he gets another shot next week against the Vikings — Mahomes practiced on a limited basis this week before he was ruled out Friday — he gave the Chiefs a chance to beat the Packers in a showdown of division leaders.

That should give the Chiefs a bit of comfort going forward.

"We didn't hold back. You can't against a team like this. They're explosive," Reid said. "But he stepped his game up. He wanted everything. He attacked it during the week. He did respectable."