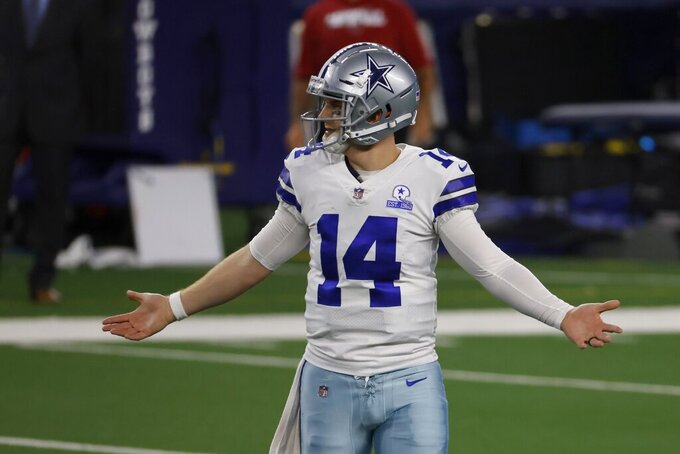 Dallas Cowboys quarterback Andy Dalton (14) gestures after throwing an interception in the second half of an NFL football game against the Arizona Cardinals in Arlington, Texas, Monday, Oct. 19, 2020. (AP Photo/Ron Jenkins) 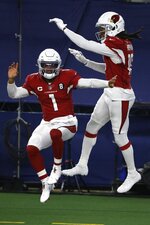 ARLINGTON, Texas (AP) — Kyler Murray accounted for three touchdowns in his first game back home as a pro, Ezekiel Elliott set up the first two Arizona TDs with fumbles and the Cardinals beat the Dallas Cowboys 38-10 on Monday night.

The speedy quarterback who won three high school championships and a Big 12 title at the home of the Cowboys improved to 7-0 as a starter at AT&T Stadium, throwing for two scores despite a rough start through the air and rushing for 74 yards and a TD.

It was the “Monday Night Football” debut for Murray, a star in high school football-obsessed Texas while playing in the Dallas suburbs, and Kliff Kingsbury, who also had a happy first trip to his native Texas as an NFL coach.

Fired after six seasons at Texas Tech in 2018 without any winning records in Big 12 games, Kingsbury was hired by Arizona soon after and has the Cardinals (4-2) tied for second place in the tough NFC West. Arizona is above .500 this late in the season for the first time since 2015, its most recent playoff year.

Andy Dalton had the rest of Dallas' four turnovers with two interceptions in his first start for the Cowboys in place of injured star Dak Prescott, just down the road from where he had a standout career at TCU.

The nine-year starter in Cincinnati led a come-from-behind victory over the New York Giants in Week 5 after the gruesome-looking compound fracture of Prescott's right ankle. There wasn't anything resembling a rally this time.

While the Dallas offense didn't look anything close to the NFL-leading unit it was with Prescott — and lost the fourth of its five projected starting offensive linemen in four-time All-Pro Zack Martin (first-quarter concussion) — Elliott's miscues led to the fifth straight game in which the Cowboys have trailed by at least two touchdowns.

The Cowboys (2-4) overcame two of those deficits, which is why they were guaranteed to stay in first place in the woeful NFC East no matter what happened in the last of three straight home games — and a third straight road game for Arizona.

Elliott was benched briefly after the two-time rushing champion lost a second fumble in the same game for the first time in his career. He has five fumbles (four lost) already this season — one shy of his career high for an entire season as the NFL's worst turnover margin dropped to minus-12 with four giveaways and no takeaways.

Murray was playing in the $1.2 billion stadium with the retractable roof and giant video board for the first time since leading Oklahoma over rival Texas there in the Big 12 championship game.

While the 2018 Heisman Trophy winner misfired on eight of his first 11 passes and finished 9 of 24 for 188 yards, Murray hit Christian Kirk in stride on an 80-yard touchdown for a 21-0 lead in the second quarter.

Kirk opened the scoring on a 6-yard jet sweep that counted as a pass after the first fumble from Elliott. Kenyan Drake scored from the 1 after the second Elliott miscue, while Murray added a 1-yard TD run.

With the game out of hand in the final two minutes, Drake broke free for a 69-yard touchdown run, giving him 164 yards.

Martin was briefly injured and returned, then went out for good after taking a knee to the helmet. Second-year player Connor McGovern took his spot, leaving left guard Connor Williams as the only preseason starter still in the lineup.

The Cowboys have had fans at all four home games, with the biggest so far (barely) at 25,174 against the Cardinals. While it was the most coronavirus-friendly setting so far with the retractable roof open for the first time, TV shots showed plenty of fans without masks over their noses. Dallas is filling about 31% of the 80,000-seat stadium. The state allows up to 50%.

Cardinals: Seattle at home Sunday to start a stretch of three straight home games that is also scheduled to include the bye, meaning Arizona won't be on the road for a month barring COVID-19 changes.

Cowboys: Washington on Sunday in the first of two consecutive road games against NFC East opponents.

By Dave Campbell 49 minutes ago
By Dan Gelston an hour ago
By Dennis Waszak Jr. 2 hrs ago
By Bill Huber 3 hrs ago
By John Glennon 3 hrs ago