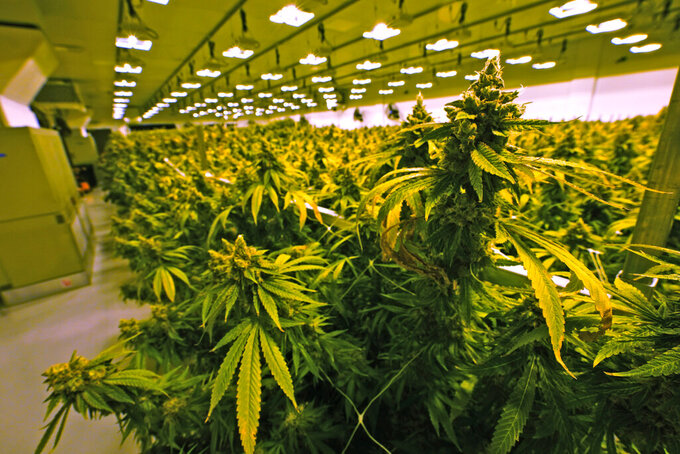 FILE - Marijuana plants are close to harvest in a grow room at the Greenleaf Medical Cannabis facility in Richmond, Va., on June 17, 2021. As the Virginia General Assembly reaches the halfway point of this year’s session, one of the year’s most complicated issues — possible changes to the state’s new law legalizing recreational marijuana — has stalled in the GOP-controlled House. (AP Photo/Steve Helber, File)

The NCAA has relaxed the amount of THC an athlete can have to trigger a positive test, and is recommending less-stringent penalties for athletes who do test positive for marijuana.

The threshold-level change is effective immediately and is retroactive to drug tests taken since fall 2021, the NCAA said Friday.

Marijuana is legal in some form — medical, recreational or both — in the majority of U.S. states.

“Reconsidering the NCAA approach to cannabis testing and management is consistent with feedback from membership on how to better support and educate student-athletes in a society with rapidly evolving public health and cultural views regarding cannabis use," NCAA Chief Medical Officer Dr. Brian Hainline said in a statement. He also said pot is “not considered a performance-enhancing substance.”

Under the new proposal, an athlete will have to follow a school's “a management plan and education" after testing positive a first time. The second positive test also would not cause an athlete to lose eligibility, as long as he, she or they complied with the first management plan; otherwise, the athlete would sit out 25% of regular-season games.

The third positive test again still wouldn't affect eligibility if the athlete was compliant with the previous two plans; if not, the athlete would lose out on 50% of regular-season contests.

Each NCAA division will have to vote on the proposed new penalties.

“These adjustments to the NCAA drug testing program were approved after careful consideration and extensive discussion of the recommendations made by the Drug Testing Subcommittee, which has been meeting since last fall,” said Dr. Stephanie Chu, Colorado team physician and chair of the NCAA's Committee on Competitive Safeguards and Medical Aspects of Sports.

The NBA suspended testing for marijuana for the current season, MLB removed marijuana from its banned-substance list, the NHL and NFL also have loosened marijuana rules and the NFL is funding research on the effects of cannabinoids on pain management and neuroprotection from concussion in elite football players.

The former executive director of the National Organization for the Reform of Marijuana Laws, or NORML, told USA Today in July 2013 that testing positive at 150 nanograms per milliliter would equal a “pretty dedicated cannabis consumer.”