Nevada governor: No masks at events that require vaccines 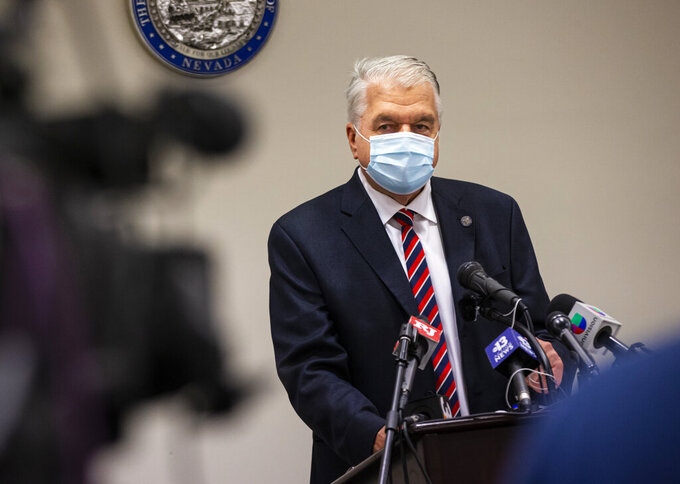 LAS VEGAS (AP) — Large events held in Nevada can add themselves to the growing number of places in the U.S. where people in crowds are asked to prove they have been inoculated against COVID-19, the governor said Monday.

Democratic Gov. Steve Sisolak said that large indoor venues in cities like Las Vegas and Reno will be allowed to opt out of the state's mask requirements if they verify their guests are vaccinated.

“This is cutting edge. There’s no other venues in the country that are doing this," Sisolak said. “I think it is going to get people more people wanting to go to an event because they know that when they walk in that arena, or that stadium, everybody’s vaccinated.”

Hours after the announcement, the Las Vegas Raiders went public with a plan made possible by the new directive to require vaccines — and not masks. Starting at the Raiders' September 13 game against the Baltimore Ravens, fully vaccinated fans will not have to wear masks — a first-in-the-NFL policy.

The Raiders will offer vaccines prior to games. Franchise owner Mark Davis said the policy resulted from discussions with Sisolak and community leaders. Sisolak said that the plan was not developed for one operator or venue.

Venues with capacities greater than 4,000 will be eligible for the exemption. Partially vaccinated people and children ineligible to receive vaccines can attend venues that opt in, but must remain masked. Sisolak made clear that the policy was not a mandate and was voluntary for venues.

He said he'd seen pictures of unmasked fans at recent soccer and football games and framed his directive as an option for event organizers who don't want to enforce mask mandates.

“This gives an option for event organizers to choose between requiring masks indoors for all attendees — regardless of vaccination status — or making the choice to only allow vaccinated individuals into their events, and letting the fully vaccinated take their masks off,” he said.

The move to expand proof of vaccination requirements in one of the country's entertainment capitals comes days after officials in New York, San Francisco and New Orleans adopted proof-of-vaccination measures for indoor public spaces, conventions or concert halls.

Some large venues in Las Vegas have for weeks been requiring conference and concert attendees to provide proof of vaccination status.

The Vegas Golden Knights began using the the mobile app CLEAR in May as the 18,000-seat T-Mobile Arena went to full capacity for NHL playoffs. The app also screens attendees with a health questionnaire before they enter a venue.

In addition to making events feel safer, Sisolak said the incentive to attend events unmasked would encourage more people to get vaccinated.

MGM Resorts, the state's largest employer, announced separately Monday that new hires and salaried employees who don’t work from home will be required to be fully vaccinated against COVID-19 by Oct. 15.

President Joe Biden has urged cities to adopt proof-of-vaccination requirements for restaurants and other businesses. New Orleans Mayor LaToya Cantrell called proof of vaccination the best way to protect businesses instead of closures.

Unlike cities that have adopted proof of vaccination measures for restaurants, Nevada's new measures are tailored to tourism and the large events that power the state's economy.

Sisolak said he didn't plan to mandate proof of vaccination measures for restaurants or small venues, but any private business could adopt measures if they choose to.

Elsewhere, in Republican-led states like Florida and Texas, governors and lawmakers are prohibiting so-called “vaccine passports” and barring businesses from denying service to unvaccinated patrons.

Nevada has progressively adopted tighter measures amid the summer's variant-fueled surge. Sisolak has mandated regular weekly testing for those among the state's more than 27,000 public employees who don’t get vaccinated. His proposal to require vaccines at public colleges and universities is scheduled go before the state board of health on Friday.

State health officials reported that just under 60% of people ages 12 and older have received at least one dose of vaccine, and 49.4% have been fully vaccinated. In Las Vegas, the figures are 60.6% and 48.5%.

A surge in coronavirus cases statewide has slowed somewhat, health officials said Friday as they pointed to the governor’s order to quickly reimpose an indoor mask mandate July 30, following guidance from the U.S. Centers for Disease Control and Prevention.

Metz reported from Carson City. He is a corps member for the Associated Press/Report for America Statehouse News Initiative. Report for America is a nonprofit national service program that places journalists in local newsrooms to report on undercovered issues.