NFL At 100: Fantasy football all too real in sports culture 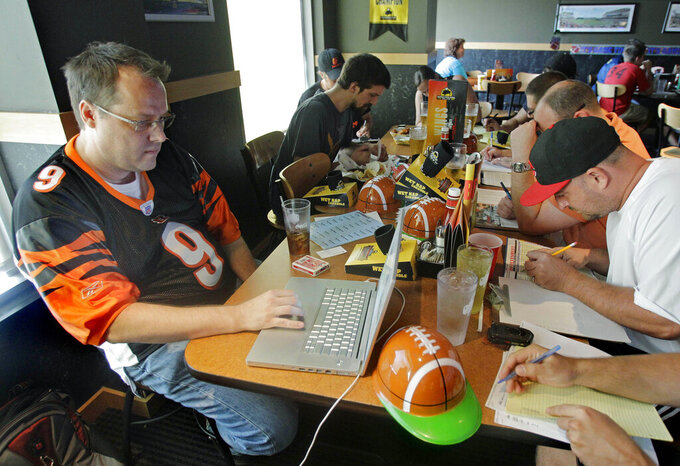 FILE - This Aug. 30, 2010, file photo shows Brian Sherman, left, using his laptop to record moves in his team's fantasy football draft, at a Buffalo Wild Wings restaurant in Cincinnati. From 2007 to 2017, the number of people playing fantasy football more than tripled, from 13.8 million to 42.7 million, according to the Fantasy Sports & Gaming Association. This past Sunday, ESPN’s fantasy app drew 8.3 million unique users _ its biggest day ever _ according to ESPN and Adobe Analytics (AP Photo/Al Behrman, File)

Kyle Rudolph is now in his ninth season with the Minnesota Vikings, the team that drafted him in 2011. He's had a stable career with just that franchise, but he was involved in at least one significant trade.

"My dad actually did not draft me when I came out," Rudolph said. "One of his buddies did, and my dad traded for me, so I'm on his team to this day."

The image of a father rooting on his son because of the fantasy implications is amusing to think about, but Rudolph's endearing anecdote may be reasonably common nowadays. The 29-year-old tight end is part of a generation of players who grew up as fantasy leagues were becoming part of the mainstream sports culture in America.

No discussion of the modern NFL and its popularity is complete without acknowledging this phenomenon — in which fans all over the country compete for championships of their own as owners of virtual franchises.

From 2007 to 2017, the number of people playing fantasy football more than tripled, from 13.8 million to 42.7 million, according to the Fantasy Sports & Gaming Association. This past Sunday, ESPN's fantasy app drew 8.3 million unique users — its biggest day ever — according to ESPN and Adobe Analytics.

Networks, websites and even NFL teams all seem to understand the draw of fantasy leagues, and their importance to fans watching at home and in stadiums.

"Anything that's good for overall NFL fandom is good for the individual clubs," said Emily Griffin, vice president of marketing for the Detroit Lions. "We consistently hear from (fans): 'We want more fantasy stats, we want more out-of-town scores.'"

When Rudolph describes his father's league, it sounds almost prehistoric compared to the internet-powered drafts and stat trackers of today.

"They started playing in 1979 when they were seniors in high school," he said. "Obviously at that time, you don't have computers and internet, you get the scores on TV afterward and get the newspaper to get the box scores, and it was points only. So it didn't matter how many catches, how many yards, how many carries. ... It's a keeper league, so my dad had played since 1979 and had Dan Marino for his whole career, Peyton Manning for his whole career."

Rudolph says his dad's league still keeps score by hand, but the internet has obviously revolutionized the way many people follow their fantasy leagues and research players.

"The first one was, I think we can take some credit for improving the content to make it more current. The second one's league management online," Phythian said. "The third was the leagues and the big marketing channels embracing fantasy. That came later, it didn't come first. It came, I would say, 2003ish, where they finally gave up on saying that it's gambling and understood it was like office pool on steroids, really."

Now that sports betting is legal and operating in nearly a dozen states, the next innovations may blur the line a bit between that and fantasy sports.

"What I think is coming next is we're going to see hybrid fantasy-gambling products in the marketplace," said Paul Charchian, president of the FSGA. "As the gambling companies realize that there's 50 million Americans that know and love fantasy, and that they want something that's a player-based outcome for sports betting, and so I think that's a huge area of potential growth."

The growth so far has already been substantial, and that's evident every weekend during the season. A sports bar on an NFL Sunday might include several different kinds of fans. Some might be watching their favorite team, and some might just be glancing from TV to TV, looking for their fantasy players. Some might be trying to do both.

"The generation before ours, you were a fan of whatever team or wherever you lived or wherever you watched," Rudolph said. "Now people are growing up being just fans of players because they have them on their fantasy team, and it's amazing how fantasy has really changed the landscape in sports."