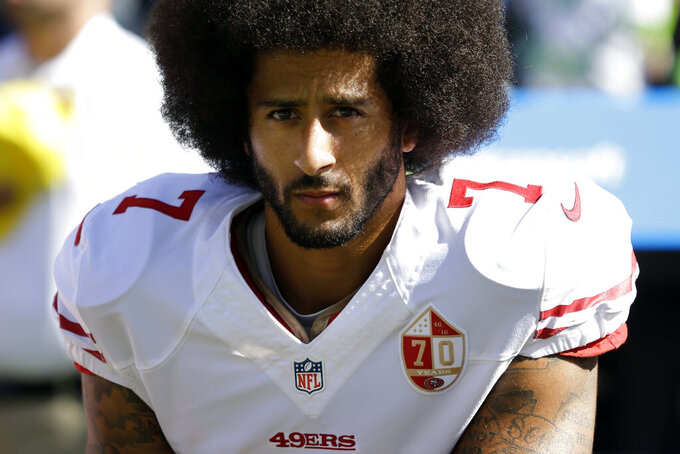 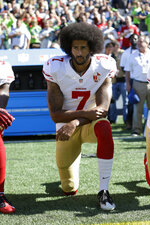 Roger Goodell would like to see Colin Kaepernick back in the NFL this season.

The NFL commissioner said during ESPN's “The Return of Sports” special on Monday that he is encouraging teams to sign the 32-year old quarterback, who hasn't played the past three seasons. Kaepernick was with the San Francisco 49ers in 2016 when he kneeled during the national anthem to protest racial injustice.

“If he wants to resume his career in the NFL, then obviously it’s gonna take a team to make that decision. I welcome that, support a club making that decision and encourage them to do that," Goodell said during his interview with ESPN's Mike Greenberg.

Seattle Seahawks coach Pete Carroll said last week that he received a call from another team about Kaepernick. Carroll and the Seahawks brought in Kaepernick for a workout in 2017 and had another planned in 2018 before it was canceled.

Goodell set up a tryout for Kaepernick in Atlanta last year for scouts of all 32 teams to attend, but it unraveled at the last moment due to lack of media access and what Kaepernick's representatives saw as an unusual liability waiver. Instead of the workout taking place at the Falcons' training complex, Kaepernick conducted an impromptu session at a high school in front of media and scouts from eight teams.

The NFL released a video on June 5 in which Goodell apologized for the league for not doing a good job of listening to concerns by players on racial inequality. Goodell though was roundly criticized for the apology not mentioning Kaepernick.

The video came out a day after many players released a video criticizing the league for not condemning racism following the May 25 death of George Floyd.

“We had spent time prior to that understanding all the frustration, fear and sadness. When the video came out on Thursday it was very powerful. It was appropriate for me to respond,” Goodell said. “We should have listened to our players earlier including Colin Kaepernick, Eric Reid, Kenny Stills, Malcolm Jenkins and so many people really brought these issues to light.”

“We all need to be on the same page and address some of the uncomfortable things that need addressed,” he said.

Goodell did not answer how the league would respond if President Donald Trump continued to criticize them if players kneeled for the National Anthem. Goodell also said that he wants to include Kaepernick’s voice on how the league should approach social issues.

“I hope we’re at a point now where everybody’s committed to making long-term, sustainable change,” Goodell said. “If his efforts are not on the field but continuing to work in this space, we welcome him to that table and to help us, guide us, help us make better decisions about the kinds of things that need to be done in the communities.”

NBA commissioner Adam Silver said when the league gathers at the Disney campus it would provide an opportunity for the league to do more to promote social and societal change -- especially since players, who will be confined to the campus, will have plenty of free time on their hands and with what’s expected to be a sizable media contingent present.

“How can we use our larger platform, the NBA together with our players, really to affect change?” Silver asked. “There’s an appropriate role, of course, for protests. There’s an appropriate role for those who choose not to engage in the game of basketball down in Florida. But ... for those who decide to come, together with the league, what are those things we can be doing?”

Another interesting point in what Silver said was the acknowledgement that some players may choose not to go to the ESPN Wide World of Sports complex for the restart of the season. A group of players, led by Kyrie Irving, has made it clear in recent days that they want their colleagues to think about the ramifications of playing at a time of racial and social unrest.

Portland guard Damian Lillard has been part of a protest and said he hopes that people realize “that the black community has had enough” when it comes to injustice. But he also said he plans to play, even though he expressed some reservations about how safe it will be from a health perspective.

“This is what we do. This is our job,” Lillard said. “And this is how we take care of our families. And this is my way of providing for communities and impacting my community. So to play the game I love, to resume the season, I guess it’s a risk I’m willing to take.”

Goodell, NHL commissioner Gary Bettman and MLS commissioner Don Garber acknowledged there will be positive tests once their sports return, but that they are hoping to isolate those as quickly as possible along with aggressive use of contact tracing.

Monday's show began with baseball commissioner Rob Manfred casting some doubt on whether there will be games this season after a breakdown in talks with the players' union on salaries. Manfred said last week he was 100% certain games would be played.

“I’m not confident. I think there’s real risk; and as long as there’s no dialogue, that real risk is going to continue,” Manfred said. “The owners are 100% committed to getting baseball back on the field. Unfortunately, I can’t tell you that I’m 100% certain that’s going to happen.”