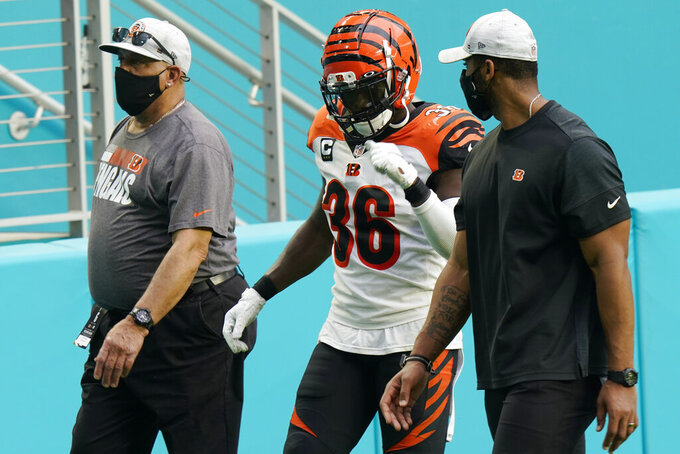 Cincinnati Bengals strong safety Shawn Williams (36) is escorted off the field after he was disqualified following a fight during the second half of an NFL football game against the Miami Dolphins, Sunday, Dec. 6, 2020, in Miami Gardens, Fla. (AP Photo/Lynne Sladky)

Both have until mid-week to appeal their suspensions.

Jon Runyan, the league’s vice president of football operations, issued the one-game suspensions without pay for violations Sunday of the NFL’s rules regarding unnecessary roughness and unsportsmanlike conduct.

Tart’s violation occurred with 8:25 remaining in the second quarter of Tennessee’s game at Cleveland when he stepped on guard Wyatt Teller.

Williams’ infraction took place in the final minute of the first half of Cincinnati’s game at Miami on Sunday when he stepped on guard Solomon Kindley. Williams was ejected following an ensuing fight.