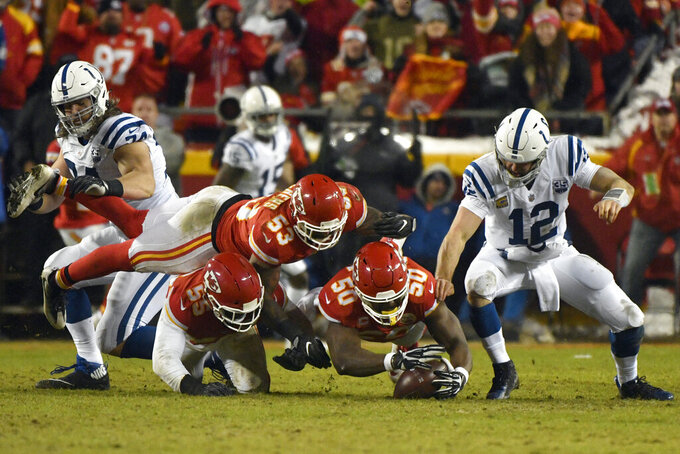 Los Angeles Chargers at New England, 1:05 p.m. EST. Philip Rivers and the Chargers (13-4) are coming off their first playoff victory since 2013 season, a 23-17 win at Baltimore last week. Los Angeles is 8-1 on the road this season, but Rivers is 1-7 in his career against Patriots — including 0-4 in games in Foxborough and 0-2 in the playoffs. Tom Brady and the Patriots (11-5) had a first-round bye and are looking for their eighth consecutive trip to the AFC championship game.

Philadelphia at New Orleans, 4:40 p.m. EST. Nick Foles and the defending Super Bowl-champion Eagles (10-7) are coming off a 16-15 win at Chicago last week, a victory secured when the Bears' Cody Parkey had a potential-winning 43-yard field goal doink off the upright and then the crossbar. Philadelphia coach Doug Pederson is 4-0 in the playoffs. Drew Brees and the Saints (13-3) are the NFC's No. 1 seed and had a first-round bye. New Orleans is 5-0 at home in the playoffs since Sean Payton became coach in 2006, when he won his first playoff game as head coach against the Eagles.

— Patrick Mahomes, Chiefs, threw for 278 yards and ran for a touchdown to help Kansas City advance to the AFC championship game with a 31-13 victory over Indianapolis.

— Dak Prescott, Cowboys, passed for 233 yards and a TD and also ran for a score in a losing cause as Dallas fell to the Los Angeles Rams 30-22.

— C.J. Anderson and Todd Gurley, Rams. Anderson rushed for 123 yards and two touchdowns, and Gurley ran for 115 more yards and another TD in Los Angeles' 30-22 victory over Dallas.

— Amari Cooper, Cowboys, had a touchdown catch and finished with six catches for 65 yards in Dallas' 30-22 loss to the Los Angeles Rams.

— Zach Pascal, Colts, recovered a blocked punt by Najee Goode for a touchdown for one of the few bright spots in Indianapolis' 31-13 loss at Kansas City.

— Greg Zuerlein, Rams, made three fields in Los Angeles' 30-22 win over Dallas with his only miss a 63-yard attempt to end the first half.

— Dee Ford and Justin Houston, Chiefs. Ford had a sack and forced a fumble and Houston sacked Andrew Luck twice and also had a fumble recovery to lead Kansas City's strong defensive effort in a 31-13 win over Indianapolis.

Kansas City reached its first AFC title game since January 1994 with a 31-13 win over Indianapolis. ... The Chiefs' span of 52 seasons without hosting a conference championship was the third-longest in the Super Bowl era, behind only Detroit and Tennessee, who are tied with 53 seasons each. ... Three years to the day after the NFL approved the Rams' return to Los Angeles, the franchise earned its first playoff victory since coming home from 21 years in St. Louis — beating Dallas 30-22.

After setting a franchise record in the regular season with 50 touchdown passes, Kansas City set a team postseason mark with three rushing scores — one each by Patrick Mahomes, Damien Williams and Tyreek Hill — in their win over Indianapolis. ... C.J. Anderson and Todd Gurley became the fourth set of teammates in NFL history to rush for 100 yards apiece in a postseason game, leading the Los Angeles Rams to a 30-22 win over Dallas. Los Angeles also racked up a franchise playoff-record 273 yards rushing.

Until Adam Vinatieri missed a 23-yard field goal in Indianapolis' 31-13 loss at Kansas City, he was 14 for 14 in the playoffs kicks from 25 yards or closer. Since 1991, Vinatieri was the only player in the NFL who was perfect on FGs from that range with a minimum of 10 attempts. He also missed an extra point in the fourth quarter, his first in the playoffs after 70 consecutive conversions.

C.J. Anderson and Todd Gurley became the fourth set of teammates in NFL history to rush for 100 yards apiece in a postseason game. Anderson rushed for 123 yards and two touchdowns, and Gurley ran for 115 more yards and another TD in the Los Angeles Rams' first playoff victory in 14 years, 30-22 over the Dallas Cowboys in the divisional round on Saturday night. Los Angeles racked up a franchise playoff-record 273 yards on the ground — also the most allowed in the postseason by the Cowboys, who were playing in their NFL-record 63rd postseason game.

Chiefs coach Andy Reid was summoned to the corner of Arrowhead Stadium during the two-minute warning in the first half of Kansas City's 31-13 win over Indianapolis to implore fans to stop throwing snowballs on the field. Earlier in the half, one almost hit Colts punter Rigoberto Sanchez while he was kicking.

Kansas City safety Eric Berry (heel) and running back Spencer Ware (hamstring) were inactive for the Chiefs' 31-13 win over Indianapolis. ... Colts center Ryan Kelly (knee) left late in the fourth quarter. ... Rams CB Aqib Talib went to the locker room in the third quarter to be evaluated for a concussion, but returned for the fourth quarter of Los Angeles' 30-22 victory over Dallas.

"We wanted to light up the city. We didn't want to take the road down memory lane." — Chiefs defensive tackle Chris Jones after Kansas City cruised past Indianapolis 31-13 to advance to the AFC championship game.

"We always talk about attacking success, never fearing failure. We wanted to come out here and try to play fearless tonight." — Rams coach Sean McVay on his call for a simple run on fourth-and-goal from the 1 with 7:16 to play, when C.J. Anderson bulled in behind his blockers for LA's final points in a 30-22 win over Dallas.