Nick Foles is proving to be Mr. Clutch 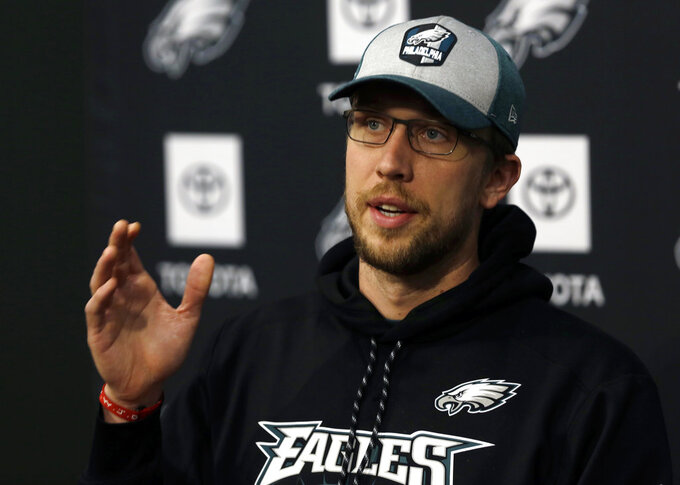 Nick Foles is a backup quarterback in Philadelphia but he's one of the most clutch postseason players in NFL history and his stats prove it.

Foles has won four straight playoff games, leading the Eagles on game-winning drives in the fourth quarter in the Super Bowl last February and in a 16-15 victory at Chicago in a wild-card game last week.

He has the best passer rating (105.2) and highest completion percentage (69.8 percent) of any quarterback in postseason history with at least 150 attempts. Foles is 125 of 179 for 1,432 yards, 10 touchdowns and three interceptions. Two of those picks came against the Bears when Foles played with injured ribs and seemed to have trouble following through on his passes. Still, he tossed a 2-yard TD pass to Golden Tate on fourth down with 56 seconds remaining.

Foles also has the best passer rating (146.5) on third and fourth downs in postseason history, completing 40 of 52 passes for 522 yards and six touchdowns with no interceptions in five career playoff games.

And, he has a TD reception on the "Philly Special" play against the Patriots.

Here's a look inside more numbers heading into the divisional round of the playoffs:

SIX SEED MAGIC: The Eagles and the Colts are trying to become only the third No. 6 seed to win a Super Bowl, joining the 2005 Steelers and 2010 Packers. Only three others advanced to the conference title game: the 2008 Eagles, 2008 Ravens and 2010 Jets.

CHASING PITTSBURGH: The Cowboys have 35 postseason victories and the Patriots have 34. The Steelers are first with 36 wins and also first with six Super Bowl titles. Dallas and New England each has five.

GUNSLINGERS: Patrick Mahomes, who led the NFL with 50 touchdown passes, and Andrew Luck, who was second with 39, have the most combined regular-season TD passes (89) among any opposing quarterbacks in a playoff game in the Super Bowl era. The Colts visit the Chiefs on Saturday.

OLD-TIMERS: Tom Brady (41) and Philip Rivers (37) combine for a total of 28,688 days old, the oldest combined age by opposing starting quarterbacks in a postseason game in NFL history, surpassing Brady and Peyton Manning in 2016. The Patriots host the Chargers on Sunday.

EARLY SCORES: The Eagles have won 19 straight games when they score in the first quarter, including 7-0 this season.