From one Kubiak to another, Vikings offense staying in sync 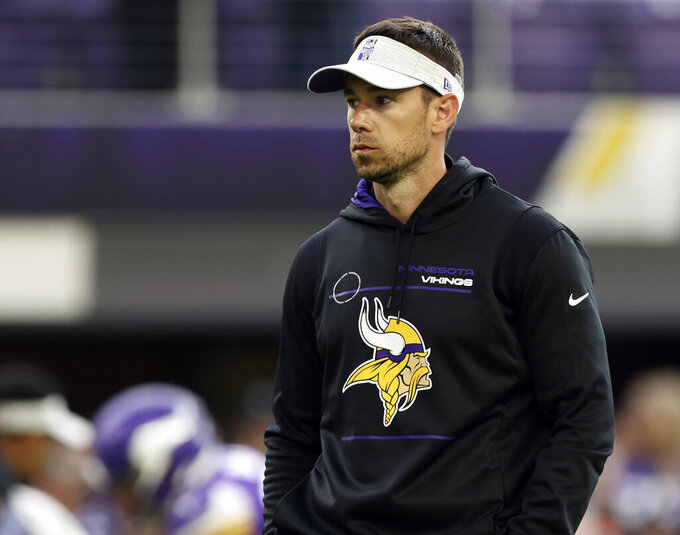 FILE - In this Aug. 21, 2021, file photo, Minnesota Vikings offensive coordinator Klint Kubiak watches warmups prior to an NFL preseason football game against the Indianapolis Colts in Minneapolis. Three games into his debut as the play caller, Kubiak is clicking with quarterback Kirk Cousins and making a seamless transition from his now-retired father. (AP Photo/Stacy Bengs, File)

EAGAN, Minn. (AP) — The architect of the improvement Minnesota's offense made two years ago, Gary Kubiak, has retired to his ranch in Texas.

One of the directors, Kevin Stefanski, is currently the head coach in Cleveland.

The Vikings are so far moving the ball just fine, though, with Klint Kubiak running the show.

“We trust the process. He trusts us,” wide receiver Adam Thielen said.

Three games into Kubiak's debut as offensive coordinator, having succeeded his well-regarded and long-accomplished father, the Vikings are third in the NFL in yards and eighth in points.

Over the past 2 1/2 games following a penalty-filled start to the season at Cincinnati, the offense has been mostly in sync — leaving the defense and special teams as much bigger concerns in Minnesota.

The 34-year-old Kubiak likely wouldn't be in this position at his age were it not for the connections his dad had from his 38 seasons in the NFL as a quarterback, position coach, offensive coordinator and head coach.

That doesn't mean he's not qualified, though, and the Vikings have hardly blinked during the smooth transition to a relative newbie who's only 18 months older than Cousins.

“So much of what Klint did to create the foundation of our offense for 2021 was spent in January, February and March. When we show up in April, that plan is in place and he’s ready to teach to us,” Cousins said, adding: “The amount of time we’ve had on task together in the quarterback room for two seasons, I think it’s really helped us be on the same page.”

Kubiak was hired by the Vikings in 2013 on head coach Leslie Frazier's staff and stayed on when Mike Zimmer replaced Frazier the following year.

After three seasons with Denver, where his father long worked, Kubiak returned to Minnesota in 2019 at the encouragement of Stefanski, a close friend who had just been appointed offensive coordinator for what wound up as the last of his 14 years with the Vikings.

Stefanski left for Cleveland in 2020, when Gary Kubiak switched from his advisory role to the primary play-caller. When he retired, his son was the natural pick for Zimmer.

With the Browns due to visit the Vikings on Sunday, the communication between Stefanski and Kubiak has clammed up for obvious reasons. The similarities between the two and the offenses they're running are strong.

The system that Gary Kubiak has long taught, passed down from former Broncos boss Mike Shanahan and spread around the NFL through various branches of his coaching tree, is thriving in both Cleveland and Minnesota around a productive running attack behind a zone blocking scheme to set up a steady diet of play action, rollout and screen passes.

“It’ll be good to see him, but it’s the players, it’s our guys going out and battling,” Klint Kubiak said of Stefanski. "Right now, it’s the coach’s time for preparation. Sunday is about the players. Just trying to get our guys ready to go to have some success.”