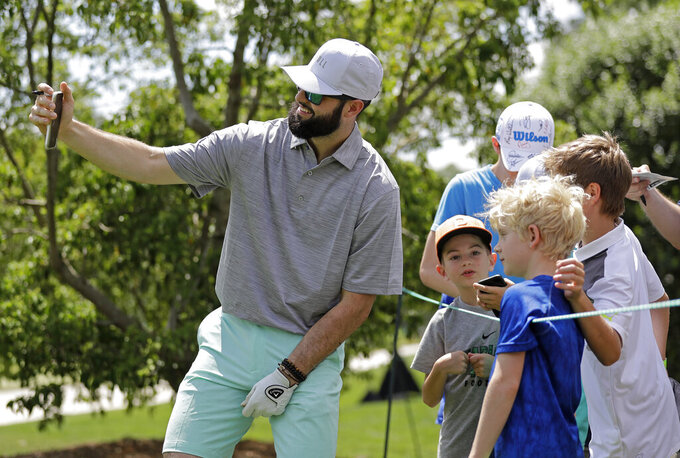 Carolina Panthers draft pick Will Grier takes a selfie with fans on the second hole during the pro-am of the Wells Fargo Championship golf tournament at Quail Hollow Club in Charlotte, N.C., Wednesday, May 1, 2019. Grier is kicking off his NFL career with the swagger of a starting NFL quarterback. The adulation surrounding the third-pick pick has created a buzz about the Panthers' QB situation with Cam Newton coming off shoulder surgery. (AP Photo/Chuck Burton)

CHARLOTTE, N.C. (AP) — As Will Grier launched his tee shot down the first fairway at Quail Hollow Club on Wednesday, one overzealous fan shouted "Move over Cam!"

Grier appreciates the support, but he knows that's not happening anytime soon.

Cam Newton is in no danger over losing his starting job to the Panthers new third round draft pick.

While Grier joins the Panthers with the swagger, intellect and maturity of a potential starting NFL quarterback, he'll have to wait his turn. Panthers general manager Marty Hurney has said unequivocally Newton remains the team's starter and franchise quarterback.

Grier is smart enough to know that, and the rookie is saying all the right things.

"You do what is best for the team in all aspects," Grier said at the Wells Fargo Championship Pro-Am golf event. "That's really what I am here to do is to support Cam and be there for him and push him and make him better and be there for anything he needs. But also, my job is to be ready to go when my name is called."

But if he does get a shot, the hometown quarterback will certainly have the support of fans.

He grew up in Davidson, North Carolina — about a 20-minute drive from where the Panthers call home. He grew up watching Panthers games in the team's downtown stadium and cheered for his favorite player, Steve Smith. He became a local hero of sorts when he garnered national attention after throwing for a high school-record 834 yards and 10 touchdowns in a state playoff game for Davidson Day, where his father Chad coached.

When the Panthers drafted Grier, it set social media in the Carolinas abuzz.

Grier's popularity was evident as he teed off alongside PGA Tour pro J.B. Holmes before a gallery of hundreds. He spent the next several hours signing autographs and posing for selfies between golf shots.

Grier said it has been an equally "hectic and happy" week, but now he's eager to get to work when the Panthers open rookie minicamp on May 10.

"I'm just ready to play ball again," said Grier who threw for 3,864 yards and 37 touchdowns last season for the Mountaineers and finished fourth in the Heisman Trophy voting. "It feels like forever. You go through this whole process and I'm definitely excited to get back to throwing a football."

The one thing that could potentially expedite Grier's playing time is the uncertainty surrounding Newton's shoulder.

While the Panthers say the 2015 league MVP is experiencing more flexibility in his right shoulder since surgery, Newton still hadn't thrown a pass as of last weekend. So despite Carolina's optimism, it's too early to know if Newton will be completely healthy and able to return to top form.

Grier gives the Panthers an insurance policy for Newton, who turns 30 next week and has two years left on his current contract.

Carolina's only other backups are Tyler Heinicke and Kyle Allen, who have three career starts between them.

Grier hasn't had much conversation with Newton, other than exchanging a few text messages after the draft. But he did see a chiseled Newton among several shirtless Panthers on social media on what the team has dubbed "flex Friday."

"He looks a lot better than I do right now," Grier said with a laugh. "I have to get in the weight room with him."

Grier hasn't had much time to think about football during what has been a whirlwind week. There were a series of interviews after the draft, followed by an invitation to play in the Pro-Am, which he said he couldn't pass up — even though he's an 18 handicap and rarely plays anymore now that he has a wife and a 2-year-old daughter.

On Wednesday, his focus was on keeping the ball in the fairway.

He sent a worm-burner off the second tee that failed to make it out of the rough and into the fairway. A little while later he said to a fan, "I promise I'm a better football player than a golfer."