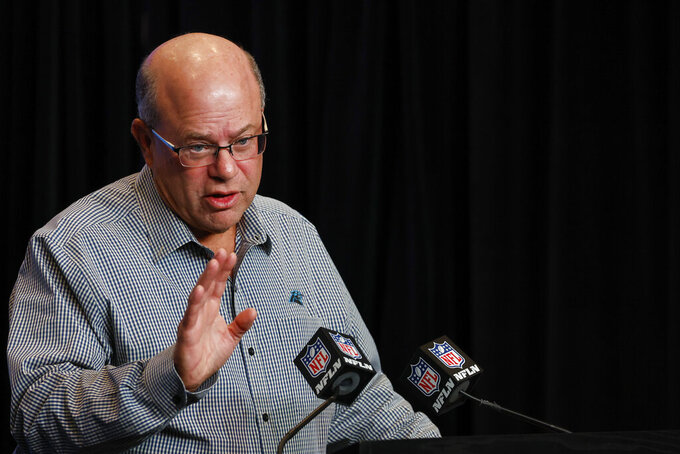 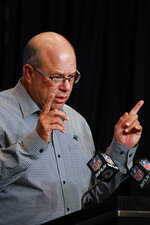 CHARLOTTE, N.C. (AP) — Carolina Panthers owner David Tepper said he ran out of patience with Matt Rhule's inability to get the franchise “over the hump.”

Rhule, the first NFL coach to be fired this season, went 11-27 with Carolina and leaves with roughly $40 million remaining on the seven-year, guaranteed $62 million contract he signed in 2020, when he made the jump from Baylor to the pros.

Tepper said in April he would be patient with Rhule, saying it takes time to build a winner in the NFL.

“It’s a funny thing, that thing called patience,” Tepper said Monday during a 30-minute news conference. “If you ask the average fan out there, they would think I was ridiculously patient. ... I think you have to show the right amount of patience and (look at) the progress that is being made. Are we winning more? Are we progressing in different ways? In all of those situations we spoke of, it hasn’t been that.”

Rhule did not respond to voice and text messages on Monday.

The Panthers fell to 1-4 with Sunday’s 37-15 loss to San Francisco — their 11th defeat in the last 12 games — as 49ers fans made Bank of America Stadium their East Coast home.

Tepper admitted the blowout loss was a factor in his decision.

“There’s numerous reasons why you make a decision," Tepper said. “Might have been a little bit of lost intensity on the field (Sunday), which was different from the first four games.”

Tepper, the second-wealthiest owner in the NFL, lured the 47-year-old Rhule away from Baylor with a deal that was notable for its length and dollar value for a rookie NFL coach. Tepper will have to pay out the rest of the deal unless Rhule takes another job. In that case, the money he makes will count against what he's owed by the Panthers.

General manager Scott Fitterer's job appears safe for now and Tepper indicated he would like a “better balance” in roster decisions between his GM and next head coach.

Rhule had more power to shape the roster than Fitterer did.

Rhule’s teams went 5-11 in 2020 and 5-12 last year. The Panthers hoped Rhule could turn things around in his third year as he did at Baylor and at Temple before that.

The team had constant turnover at quarterback under Rhule, with Teddy Bridgewater as the starter in 2020 and Sam Darnold and Cam Newton getting starts last year.

The Panthers traded for Baker Mayfield this offseason. But the 2018 No. 1 overall draft pick has been awful, ranking last in the NFL in ESPN’s total quarterback rating. Mayfield has completed 54.9% of his passes and is averaging fewer than 200 yards passing per game with four touchdowns and four interceptions.

The poor play at the game’s most important position put unsustainable pressure on Carolina’s defense. Under Rhule, the Panthers were 1-27 when allowing an opponent to score 17 or more points.

Rhule was unpopular when the season began and fans targeted him even more after the Panthers lost their season opener to the Cleveland Browns in what was dubbed the “Baker Bowl.” Chants of “Fire Rhule!” got louder with each game at home, where the Panthers are 1-3.

Tepper wouldn’t discuss his strategy for finding a new coach or even disclose who will lead the search. The 53-year-old Wilks will be in consideration for the full-time job.

“No promises were made, but if he does an incredible job, he has to be in consideration,” Tepper said.

Wilks becomes the second Black coach to lead the Panthers. The other, Perry Fewell, served as interim coach after Rivera was fired and went 0-4.

Wilks joined Brian Flores' lawsuit in April, alleging racist hiring practices by the NFL when there are vacancies for coaches and general managers. Wilks joined the lawsuit along with Ray Horton.

The lawsuit alleges that Wilks was discriminated against by the Cardinals in 2018 when he was hired as a “bridge coach” but was given no meaningful chance to succeed.

Tepper said he wouldn’t rule out hiring another college coach, but indicated that history suggests it might be better to find a coach with more NFL experience.

Tepper fired Ron Rivera, the winningest coach in franchise history, with four games left in 2019 with the Panthers at 5-7.

The Panthers have not been to the playoffs since 2017 — the year before Tepper bought the team — and have not won a playoff game since winning the NFC championship in 2015 to reach the franchise’s second Super Bowl.

“We have to build a culture of winning,” Tepper said.