Panthers say McCaffrey not expected to play against Lions 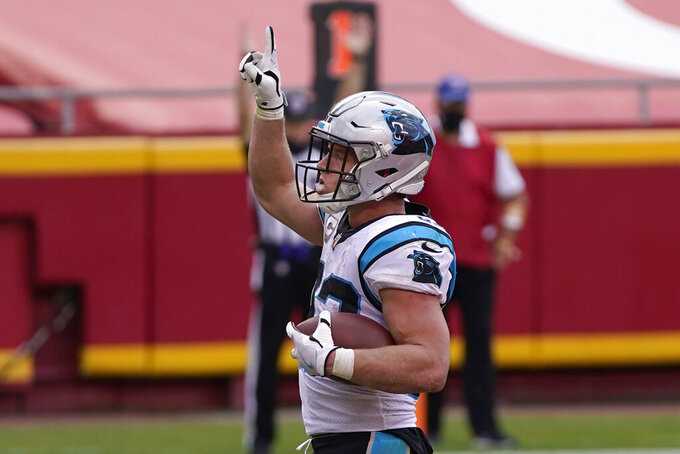 Carolina Panthers running back Christian McCaffrey (22) celebrates after scoring against the Kansas City Chiefs during the second half of an NFL football game in Kansas City, Mo., Sunday, Nov. 8, 2020. (AP Photo/Jeff Roberson)

CHARLOTTE, N.C. (AP) — Panthers coach Matt Rhule said running back Christian McCaffrey is expected to miss Sunday's game against the Detroit Lions, a big blow for a Carolina team that is looking to snap a five-game losing streak.

While Rhule said he expects McCaffrey will play again this season, he doesn't know when. He said the 2019 All-Pro's return is largely up to his doctors on when the running back is cleared medically to return.

“No one knows their body better than Christian,” Rhule said.

Carolina's next opponent, meanwhile, has its own injury concerns. Detroit quarterback Matthew Stafford did not practice Wednesday because of a right thumb problem.

“Just going to do what I can to try and be out there,” said Stafford, who was able to finish last weekend's win over Washington. “We'll see. Just trusting what our docs say and what our trainers do to try and help get it as good as I can.”

This will be the second straight game McCaffrey has missed because of a shoulder injury and the eighth game he’s sat out this season. He injured his shoulder in Carolina’s Week 9 loss to the Kansas City Chiefs after being tackled late in the fourth quarter That came after McCaffrey missed six games with a high ankle sprain.

McCaffrey has been effective when he’s played, averaging 124.7 yards from scrimmage and scoring six touchdowns.

Mike Davis will get the start for McCaffrey. Davis has totaled 675 scrimmage yards and four touchdowns in 2020, but hasn't been as effective in his past four starts for the Panthers.

Bridgewater wore a protective red jersey on at practice Wednesday after injuring his knee in Carolina's 46-23 loss to the Buccaneers on Sunday. P.J. Walker and Will Grier, who have been rotating as the No. 2 quarterback this season, split reps with the first team in practice.

“If Teddy can’t go, this will give us real clarity on who the No. 2 should be,″ Rhule said.

Bridgewater did not speak to reporters on Wednesday.