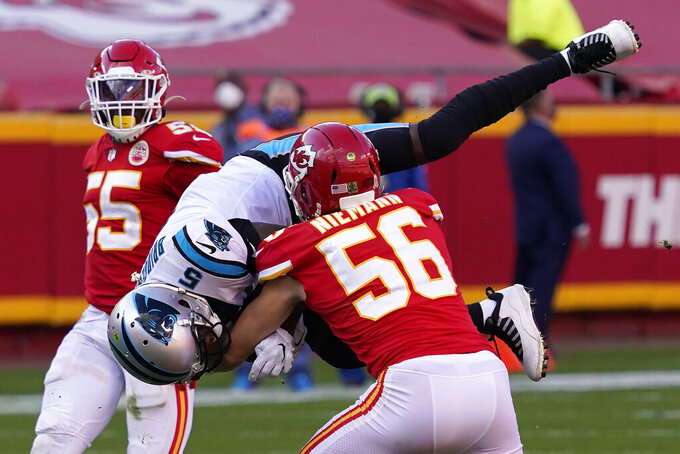 CHARLOTTE, N.C. (AP) — The Panthers found themselves in a familiar position Sunday — with the ball in their hands on the final drive and a chance to win the game.

But with Christian McCaffrey on the sideline for most of the possession with a shoulder injury, Carolina could only reach Kansas City’s 49-yard line, and a desperation 67-yard field goal attempt by Joey Slye sailed wide right as time expired, resulting in a 33-31 loss to the Chiefs.

The game was a microcosm of Carolina’s season: another close loss with another untimely injury.

The Panthers (3-6) have lost five games this season in which they’ve either had a chance to win or tie on their final offensive possession.

While it's promising that first-year coach Matt Rhule's team has been surprisingly competitive in all nine games this season, including on Sunday against the defending champion Chiefs, it also appears to be the earmark of a young squad that is still figuring out how to win.

“When you think about how we are coming up short in these games, you know a game like today, it (ticks) you off, especially when you play a team as good as the Chiefs are — that’s a great football team,” quarterback Teddy Bridgewater said. “We don’t want it to be the common theme of being right there and losing.”

Added Panthers wide receiver Robby Anderson: “It’s evident that we’re close but close isn’t good enough because we’re not getting those victories. I just think it trickles down to us not beating ourselves and allowing those mistakes, and eliminating that stuff so we can have a cleaner game and a better opportunity to win.”

McCaffrey, the team's best player, has missed six games with a high ankle sprain. When he's played, he's been incredibly productive with 374 yards and six touchdowns in 11 quarters of action. Carolina has also sustained key injuries to a number of defensive starters as well, including tackle Kawann Short, who was lost for the season with a shoulder injury.

Wide receiver Anderson has turned out to be one of the top free agent acquisitions in the NFL this season. Through nine games he's tied for third in receptions (60) and is fourth in yards receiving (751), shattering the label of only being a deep threat. Anderson has worked well underneath coverage and shown an ability to make big catches in traffic. Likewise, Curtis Samuel is blossoming into a valuable offensive weapon whether he's lined up wide or in the backfield. He has 225 yards and four touchdowns in the last three games and has routinely made big plays on third downs.

The Panthers haven't been able to resolve their issues at left tackle. Carolina addressed the problems this offseason by trading for Russell Okung, but the 11-year NFL veteran has only played in five games due to injuries. Carolina tried three players at left tackle on Sunday — Dennis Daley, Greg Little and Trent Scott — but couldn't seem to solve the Chiefs' pass rush, leaving Bridgewater under heavy duress most of the game. If Carolina decides to move on from the injury-plagued Okung after the season, left tackle could be a high priority in the 2021 draft.

Despite missing Sunday's game with a knee injury, Jeremy Chinn still leads all NFL rookies with 67 tackles. Chinn plays a hybrid linebacker/safety position and is asked to do quite a bit for the Panthers. He's responded extremely well due to his high football IQ. Rhule said Chinn has been “terrific” this season and “is going to be a really good player in this league for a long, long time.”

The Panthers as a team simply haven't been able to generate much of a pass rush outside of Brian Burns. They are averaging one sack per game, tied with the Jaguars for the fewest in the NFL.

The Panthers are awaiting the status of McCaffrey's shoulder injury after he went down early on Carolina's final drive. He returned for one play, then left again. Rhule offered no update on the injury after the loss. If McCaffrey is out again for any length of time, Mike Davis will resume the starting role at running back moving forward.

88% — Panthers touchdown percentage (8 of 9) in red zone when McCaffrey has been healthy enough to play.

47.6% — Panthers touchdown percentage (10 of 21) in red zone when McCaffrey has not been on the field due to injury.

The Panthers' playoff hopes are dwindling fast as they return home Sunday to face the Tampa Bay Buccaneers, who will certainly be motivated after getting shellacked by the New Orleans Saints on Sunday night. Tampa Bay handed Carolina its worst loss of the season in Week 2, 31-17.