Patriots' Edelman still making most of his opportunities 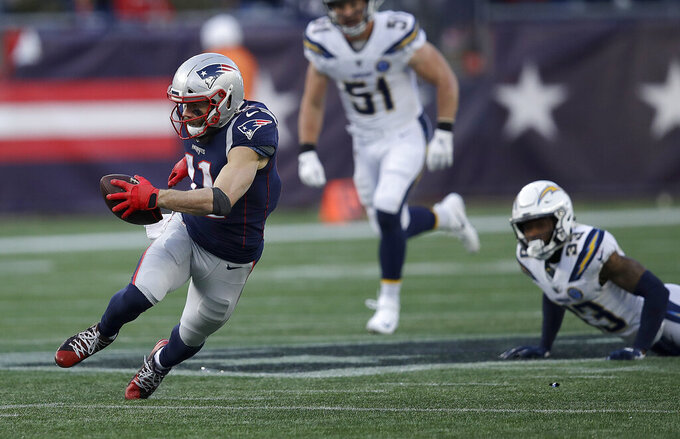 FOXBOROUGH, Mass. (AP) — His face was still a little flushed from stepping out of the subfreezing temperatures at Gillette Stadium field just minutes following the Patriots' 41-28 divisional-round win over the Los Angeles Chargers on Sunday .

Still, Julian Edelman stood at his locker satisfied — at least for a moment.

Then he was asked when he would start his preparations for their AFC championship game matchup with the Kansas City Chiefs.

"Immediately," he said without hesitation. "We're going to go play the best team in the AFC, the No. 1 seed. It's going to start with an unbelievable week of practice, preparation. We need to do that to give ourselves the best chance to win."

Making the most of every one of his opportunities has become a hallmark of Edelman's 10 seasons in New England.

The Patriots were dealt a blow prior to their final two regular-season games when Josh Gordon was suspended for a violation of the league's substance abuse policy.

But what could have created a hole in New England's receiving group has been plugged by its oldest member.

The 32-year-old Edelman has put together back-to-back vintage performances and is expected to again play a big role during Sunday's AFC championship game.

Edelman tied his regular-season high of nine catches and had a career playoff-best 151 yards receiving in New England's win over Los Angeles.

With 98 playoff receptions during his career, he moved past Reggie Wayne (93) and is second all-time behind Jerry Rice with 151. Edelman's five career 100-yard receiving games in the postseason trail only Rice's eight and Michael Irvin's six.

Edelman, who missed last season with a torn anterior cruciate ligament in his right knee and sat out the first four games of this season for violating the NFL's policy on performance-enhancers, empathizes with Gordon's situation.

"He was making plays for us. We wish him the best to get himself right," Edelman said. "That's a tough thing to go through. We're here to support him. But sometimes the train just has to keep on going. ... And as much as you miss him, you gotta start thinking about what you gotta do to keep on going out and try to win ballgames."

The week after Gordon's suspension, Edelman caught five of the six balls thrown to him for 69 yards and a touchdown.

Over the past three games, including the playoff win over the Chargers, Edelman has been targeted by Brady 29 times, catching 20 passes for 290 yards and a pair of touchdowns.

Edelman's performance on Sunday was in many ways a throwback effort by a receiver that has developed a reputation of being one of Brady's most dependable receivers in the playoffs. On Sunday, he was instrumental in helping the Patriots score on each of the first four drives of the game.

He had a third-down catch on their opening scoring drive and had a 28-yard catch on their second drive that got the Patriots in the red zone. It set up Sony Michel's second rushing touchdown of the game just a play later.

It also helped spread out the Los Angeles defense and opened the field for New England's rushing attack to wear the Chargers down .

"He's such a great player and just a great teammate, competitor and had a great game," Brady said. "He came up big. We needed it and we'll need it next week, too."

That's because it's exactly the kind of ball-control, efficient offensive effort that New England will need to limit the possessions of Chiefs quarterback Patrick Mahomes and a Kansas City offense that ended the regular season as the NFL's highest-scoring offense, averaging 35.3 points per game.

"Anytime you can start fast and score on your opening drive, good things tend to follow," Edelman said.