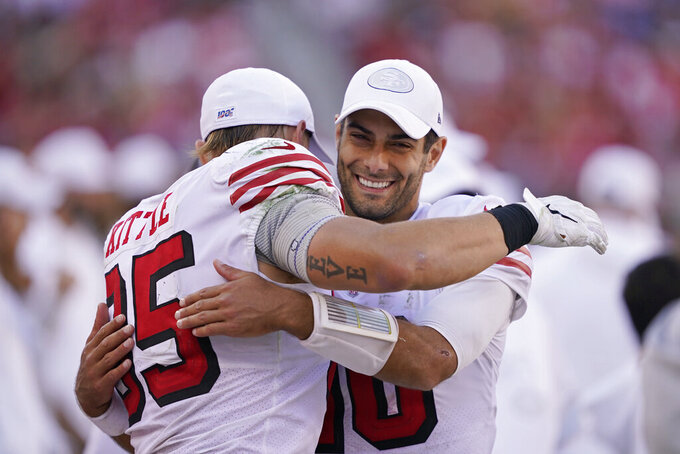 NEW YORK (AP) — Halfway through the NFL's regular season, teams are starting to get bunched together in the standings. And in the latest AP Pro32 poll .

The New Orleans Saints and San Francisco 49ers are tied for the second spot in the poll behind the defending champion New England Patriots.

The Patriots received 11 of 12 first-place votes for 383 points in balloting Tuesday by media members who regularly cover the NFL.

The Saints received the other first-place vote, and both New Orleans and the unbeaten 49ers have 366 points. The Saints have a bye this week and the 49ers will open Week 9 on Thursday night when they head to Arizona and take on Kyler Murray and the Cardinals.

"The 49ers haven't been this good since the glory days of (Joe) Montana, (Steve) Young and (Jerry) Rice," Newsday's Bob Glauber said.

There are three ties in the top half of the poll. The Indianapolis Colts and the Kansas City Chiefs, teams headed in opposite directions, are tied at No. 8. The Colts, who have won three in a row, moved up two places. The Chiefs, who have lost three of four, slipped a spot as they await the return of injured quarterback Patrick Mahomes.

The Dallas Cowboys and Buffalo Bills are tied for No. 12. The Cowboys kept their spot after their bye week while the Bills dropped four spots after being beaten at home by the Philadelphia Eagles.

NFC North rivals Green Bay and Minnesota are at Nos. 4 and 5, respectively. The Packers stayed put after topping the Chiefs on Sunday night, when Aaron Rodgers threw three touchdown passes.

"When Aaron Rodgers is on his game, like he was at Arrowhead Sunday evening, few quarterbacks in NFL history can match his artistry," said Ira Kaufman of Fox 13 in Tampa, Florida. "The Chiefs are still shaking their heads at some of those throws."

The Vikings switched spots with the Baltimore Ravens, who are coming off a bye and host the Patriots on Sunday night in one of the top matchups of Week 9.

And the Vikings head to Kansas City on Sunday in another game featuring winning teams.

Russell Wilson and the Seattle Seahawks moved up two places to No. 7. And despite losing star defensive end J.J. Watt to a season-ending injury, the Houston Texans moved up four spots to round out the top 10. The Texans head to London to face the Jaguars on Sunday.

"Flying under the radar the past two weeks," Alex Marvez of Sirius XM said of Jacksonville. "Outcome of Sunday's game versus Houston will show just how real the Jaguars are."