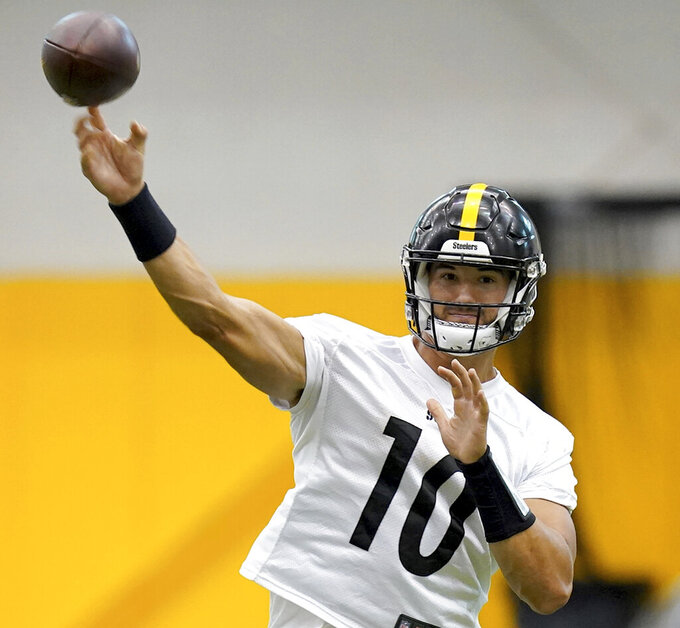 PITTSBURGH (AP) — Mike Tomlin deliberately — and quite effectively — declined to announce a starting quarterback for months, even as all signs pointed to Mitch Trubisky.

The Pittsburgh Steelers' longtime head coach wanted to wait until — as he said over and over and over during the offseason and throughout training camp — the time was “appropriate.”

In the end, Tomlin let his players effectively make the announcement for him, then quietly reinforced it not with his booming voice but with a piece of paper.

Trubisky will be the starter on Sunday when Pittsburgh begins the post-Ben Roethlisberger era in Cincinnati. Tomlin placed Trubisky's name atop the depth chart on Monday afternoon, just hours after Trubisky's teammates selected him as one of Pittsburgh's five co-captains for the 2022 season.

“I just think he's a guy who people rally around,” said defensive tackle Cam Heyward of Trubisky, who arrived in free agency in March. “He's all about team. He's very bought in. He understands and Coach T says it, he's carrying our hopes and dreams on every single play.”

Trubisky has said all the right things and done all the right things seemingly from the moment he signed a two-year deal for the chance to replace Roethlisberger. He reached out individually to the returning players on offense and welcomed the skill position players to his home in South Florida during the spring in hopes of building chemistry.

Trubisky began the spring atop the depth chart and despite a push from Mason Rudolph and rookie first-round pick Kenny Pickett — both of whom performed well throughout the offseason program and training camp — Trubisky never provided much reason for Tomlin to switch things up.

If anything, Tomlin reinforced the status quo.

Rudolph is listed as the primary backup with Pickett starting his first season in the NFL on the third string, a move that gives Pickett time to get acclimated to life as a pro and gives Trubisky breathing room. Even if he struggles in his return to a starting role after spending 2021 as a backup in Buffalo, it is unlikely the second overall pick in the 2017 draft would be replaced by Rudolph during a game unless he's injured.

Trubisky toed the line early Monday afternoon before he was formally anointed, saying simply “you're not going to hear it from me,” when asked if being a co-captain meant he had won the job.

The answer was typical Trubisky, who has made it a point to deflect attention as best he can and say as little as possible. The way he figures it, his actions will speak far louder than any words ever could.

“You just want to be that guy day in and day out that guys can look to like, ‘Hey, if I do it the way this guy does it, we’re going to be heading in the right direction,'" said Trubisky, who went 29-21 in four seasons with Chicago.

The 24-year-old Harris set a franchise rookie record by running for 1,200 yards in 2021. He quickly earned the respect of his teammates with his work ethic and discipline.

“You know, he’s a guy that leads by example, doesn’t say a lot," Heyward said of Harris. “But I just think he was destined to be captain. He was a guy that when you looked at our roster, you know, he’s the bell cow. And so we’ve had bell cows that haven't been captains, but it’s what he does off the field. He’s locked in.”

Trubisky found it telling that Harris flew to Pittsburgh on the day Trubisky officially signed. Harris gave Trubisky a rough sketch of the offense and the team's goals for 2022 and beyond.

“He was there for me from day one,” Trubisky said. “And to me, those are the little things that people don’t see that leaders do on a day-to-day basis, having those relationships that go deeper and beyond (the surface) with your teammates. And that’s why he is who he is.”

NOTES: The Steelers signed S Andrew Adams, CB Josh Jackson and LB Delontae Scott to the practice squad on Monday. ... Pro Bowl WR Diontae Johnson warmed up with his teammates on Monday, but did not participate in most portions of practice. Johnson injured his left shoulder in the preseason finale against Detroit on Aug. 28, though Tomlin said at the time that there's a chance Johnson could have returned to the game if it was the regular season.