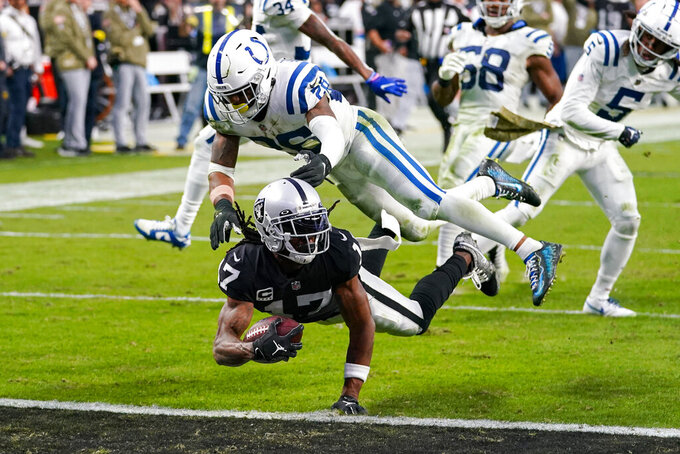 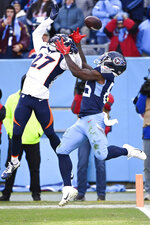 TURNOVER DIFFERENTIAL: Raiders minus-1, Broncos even.

RAIDERS PLAYER TO WATCH: RB Josh Jacobs. He rushed for 144 yards and two TDs in Las Vegas' 32-23 win over the Broncos in Week 4. That was the start of a three-week stretch in which he gained at least 143 yards a game and the Raiders went 2-1 with their loss by a single point at Kansas City.

BRONCOS PLAYER TO WATCH: QB Russell Wilson. He is having the worst season of his career. Wilson said he has to find a way to score two more touchdowns a game. That's asking a lot from a QB who has just seven TD throws in eight starts for a team that's averaging just 14.5 points per game. Plus, his O-line is banged up and most of his top receivers are sidelined.

KEY MATCHUP: Raiders WR Davante Adams versus Broncos CB Pat Surtain II. Adams had nine catches for 101 yards in their first meeting, but few on those came with Surtain in coverage.

SERIES NOTES: The Raiders have dominated the rivalry of late, winning the past five matchups, their best run since winning six straight from 1992-94, and they've also won eight of the past 10 games.

STATS AND STUFF: RB Josh Jacobs is one of 15 players with seven or more rushing touchdowns in each of his first four seasons. Ten of those running backs are in the Pro Football Hall of Fame. ... WR Davante Adams is tied with Chiefs tight end Travis Kelce for the league lead with eight TD receptions. ... Maxx Crosby is the first defensive lineman since 2012 with multiple games of 10-plus tackles. He is tied with Za’Darius Smith of the Minnesota Vikings with 14 tackles for loss. ... K Daniel Carlson has made 41 consecutive field goals, the longest streak in the NFL since Adam Vinatieri made 44 in a row between 2015-16. ... QB Russell Wilson has been sacked 29 times in eight games, including a season-high six last week when the Titans hit him 18 times. ... Wilson's best game was against the Raiders earlier this season when he threw for 286 yards and two TDs. ... WR Courtland Sutton broke out of a slump with six catches for 66 yards last week. He has 70 or more receiving yards in three of four home games this season. ... Rookie WR Jalen Virgil's first career catch was a 66-yarder for a touchdown at Tennessee last week. ... ILBs Josey Jewell and Alex Singleton are on a tear. Jewell had a team-high nine tackles last week and tied his career high with 14 against the Raiders in Week 4. Singleton is averaging 10.4 tackles over his past five games. They were on the field together last week to help hold Derrick Henry to a 2.8-yard averaage for 53 yards on 19 carries.

FANTASY TIP: Surtain will likely cover Adams a lot more in this rematch, so it could be a quiet week for the star receiver.