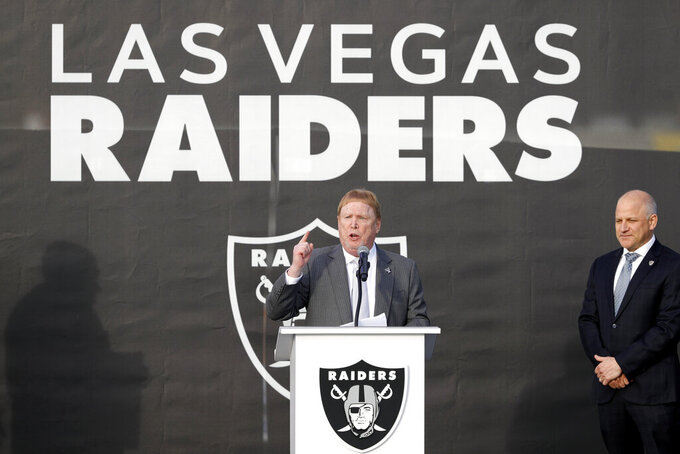 The Raiders owner purchased the WNBA team Thursday pending approval from the league's board of governors.

“I am excited to announce that I have entered into an agreement to purchase the Las Vegas franchise in the WNBA from MGM Resorts International," Davis said in a statement. "I will have more to say once I receive official approval from the WNBA Board of Governors and have had a chance to speak with the players, coaches and administrators of the team.”

The Aces moved to Las Vegas from San Antonio in 2017 and have been successful on the court. Las Vegas had the league's best record last season losing to Seattle in the WNBA Finals.

While it's unclear how the sale will impact the Aces' day-to-day operations, the Raiders have a working relationship with MGM — which partners with the NFL franchise in several business ventures.

"Mark is a longtime champion of women’s basketball and we believe he is the right person to lead the Aces into a new era. We will continue our enthusiastic support of the WNBA, NBA and basketball in Las Vegas,” MGM President of Entertainment and Sports George Kliavkoff said.

Las Vegas has a solid young core of players, including league MVP A'ja Wilson and sixth-woman of the year Dearica Hamby.

Davis has immersed himself in the Las Vegas sports scene and regularly attends Aces games, as well as NHL contests for the Vegas Golden Knights. Davis and the Raiders have been strong supporters of the Aces during their brief time in Las Vegas. The Raiders purchased 1,600 tickets to Aces games in 2019 to distribute to kids.

“We are aware that Las Vegas Raiders Owner Mark Davis has entered into an agreement to purchase the Las Vegas Aces from MGM Resorts International. MGM brought the Aces to Las Vegas a few years ago and we are extremely grateful for their leadership in building the franchise into a highly competitive one that competed in the WNBA Finals this past season," WNBA Commissioner Cathy Engelbert said. "Mark Davis has been a huge supporter of the WNBA and women’s basketball, and we look forward to learning about his vision for the team during the upcoming league approval process.”

The Raiders got approval from the NFL to move to Las Vegas in 2017 after attempts to build a new stadium in Oakland were unsuccessful and they were blocked in their attempt to move to Los Angeles.

They arrived in the desert in 2020 and opened their new $2 billion stadium which looks out at the Mandalay Bay casino where the Aces play their home games. They also built a $75 million practice facility in nearby Henderson, Nevada.