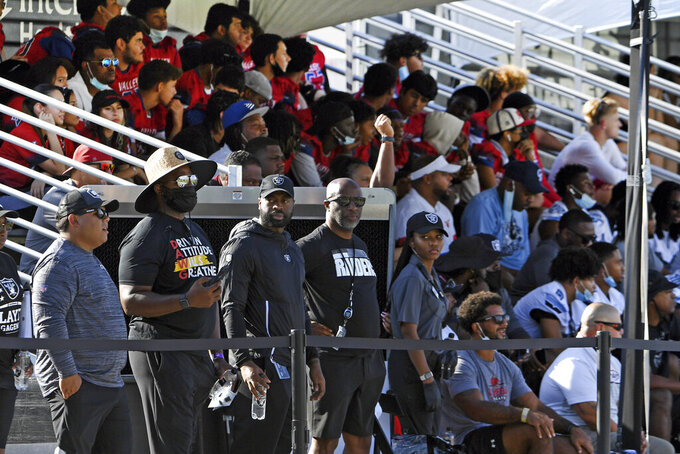 HENDERSON, Nev. (AP) — For a team that prides itself on the offensive side of the ball, the Las Vegas Raiders' lack of production inside the red zone has coach Jon Gruden seeing, well, red.

Continuing a dismal pattern since he returned to coach the Raiders in 2018, Las Vegas had the 10th-worst percentage last season, scoring just 32 touchdowns after 59 trips (54.2%) into the red zone.

“Maybe we ran it too much, but it starts right there,” Gruden added. “We've got to run the ball better in the red zone.”

Or simply produce, considering the 1-2 punch quarterback Derek Carr has at his fingertips in tight end Darren Waller and running back Josh Jacobs.

Waller led the team with 107 receptions and 1,196 yards receiving, while Jacobs was the team’s leading rusher with 1,065 yards in 15 games last season. They were also the team’s top two scorers, with Jacobs punching it 12 times on the ground and Waller registering nine touchdown receptions.

Jacobs said he addressed the red zone issues with teammates Friday, and how it needs to improve, while adding he has also spoken with Hall of Famer and Raiders great Marcus Allen about scoring deficiencies inside the opponents’ 20-yard line.

“It’s really just what kind of mentality we have,” Jacobs said. “What kind of team and identity that we’re going to have in the red zone when things get tough. Focusing on doing your job and obviously finishing drives, because a lot of times last year we drove all the way down and didn’t finish how we wanted to.”

Which was frustrating for a team that ranked seventh-best in the league with 6,133 yards of offense, and ranked 10th with 434 points overall. The Raiders averaged 27.1 points per game.

With Waller and Jacobs leading the way and a talented supporting cast that includes Bryan Edwards, Henry Ruggs, Hunter Renfrow and Foster Moreau, better production inside the red zone could launch the Raiders into a top-five scoring team.

“It was a big emphasis in the OTAs and the June minicamp, just to make sure that the players understand when we get in those situations, the urgency once we get down there in the tight red zone,” offensive coordinator Greg Olson said. “We’ll have a chance here to fix the situation during training camp and during our three preseason games, and then we’ll hit the ground running when the season gets going.”

A vast improvement inside the red zone might also help avoid a third-straight late-season collapse.

“I think we know that crunch time, if we need a play I feel like we have a lot of guys that are going out there that (Carr) trusts,” Jacobs said.

Gruden told reporters Theo Riddick had been contemplating retirement last year. Jacobs said after he hinted at retirement several times leading up to training camp, Riddick continued to bring positivity to the running backs room, even if it took the seven-year veteran running back a little longer to gear up. Testing positive for COVID-19 was the final straw, as Riddick announced his retirement Friday.

The 30-year-old Riddick finished his career with 1,037 yards on 294 attempts and had 290 catches for 2,281 yards. Riddick spent the first six years with Detroit before playing in four games for Las Vegas last season. He last played a full 16-game season in the NFL in 2017.

“He leaves a void in his presence,” Gruden said. “They called him Pops, he was a leader. He was great for Josh and great for all of our guys.”

Running back Jalen Richard, who also tested positive for COVID-19 but has attended every meeting via Zoom, is expected back Aug. 2, per Gruden.

Asked if he felt a sense of normalcy with hundreds of fans in attendance for practice, Gruden replied: “It’s normal until we come in here and everybody’s wearing masks. ... I sure have a lot of opinions. I sure get ticked off when I've got to wear a mask. I do respect what the experts tell us to do.

“Until it’s completely gone we’re going to have to continue to monitor things. But, gosh, it’s great to have fans — especially Raider fans, not Chief fans or any other fans.”