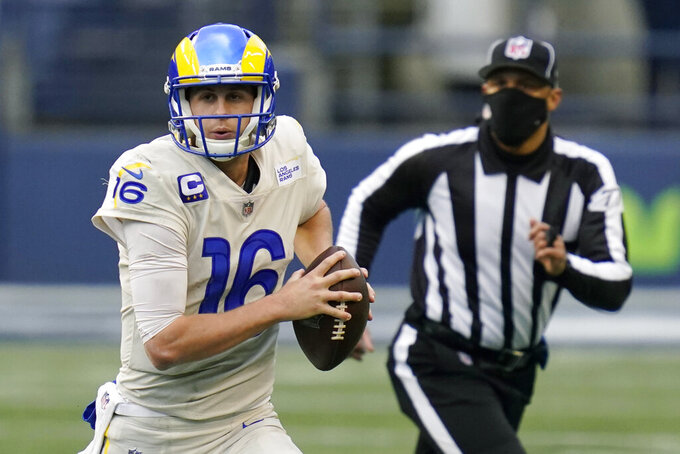 Los Angeles Rams quarterback Jared Goff (16) looks to pass against the Seattle Seahawks during the second half of an NFL football game, Sunday, Dec. 27, 2020, in Seattle. (AP Photo/Elaine Thompson)

The Los Angeles Rams quarterback hopes it doesn't keep him out of the regular-season finale against Arizona.

Goff was injured when he hit the thumb on a helmet in the third quarter, but was able to put it into place and didn’t miss a play.

LA also lost running back Darrell Henderson to an ankle injury in the third quarter. Henderson, who rushed for 62 yards, was hurt being tripped from behind.

In East Rutherford, New Jersey, Frank Gore ran his way to another career milestone and then was forced to watch the New York Jets' second win from the sideline.

The 37-year-old running back became the third player in NFL history to run for 16,000 yards, joining Pro Football Hall of Famers Emmitt Smith (18,355) and Walter Payton (16,726). But his 4-yard carry in the fourth quarter to put him at exactly 16,000 was his last of the 23-16 victory over Cleveland on Sunday because of a chest injury.

Coach Adam Gase had no immediate update on Gore, who finished with 14 carries for 48 yards. It's uncertain if Gore will be able to play in the season finale next Sunday at New England in what could be the last game of his NFL career. Gore has said he will talk about playing another season with his family in the offseason.

Jets backup offensive lineman Josh Andrews hurt his groin in the game, while Browns linebackers Tae Davis and Sione Takitaki injured ankles. None of them returned.

In other injuries around the league, Patrick Mahomes lost one of his top targets in Sammy Watkins, who left Kansas City's 17-14 win over Atlanta with a calf injury and didn't return. Chiefs linebacker Ben Niemann also hurt a hamstring.

— Houston guard Brent Qvale suffered a concussion and left tackle Laremy Tunsil injured his foot in the second quarter of the Texans' 37-31 loss to Cincinnati.

— Bengals cornerback William Jackson left with a concussion after hitting into teammate Jessie Bates on a play.

— Denver wide receiver K.J. Hamler suffered a concussion in the first quarter of the Broncos' 19-16 loss to the Los Angeles Chargers.

— Chargers safety Rayshawn Jenkins injured an ankle and offensive tackle Bryan Bulaga (foot) were both injured in the first half and did not return. CB Casey Hayward (hamstring) didn’t play during the second half. Wide receiver Keenan Allen (hamstring) was inactive for the first time since 2016 after trying to go through warmups. The Pro Bowl wide receiver came into the week second in the AFC with 100 receptions.

— Baltimore center Patrick Mekari left the Ravens' 27-13 win over the New York Giants with a back injury.

— Carolina left tackle Trent Scott left early in the third quarter of the Panthers' 20-13 win over Washington with a shoulder injury and did not return. Scott was already filling in for injured starter Russell Okung, who was inactive.