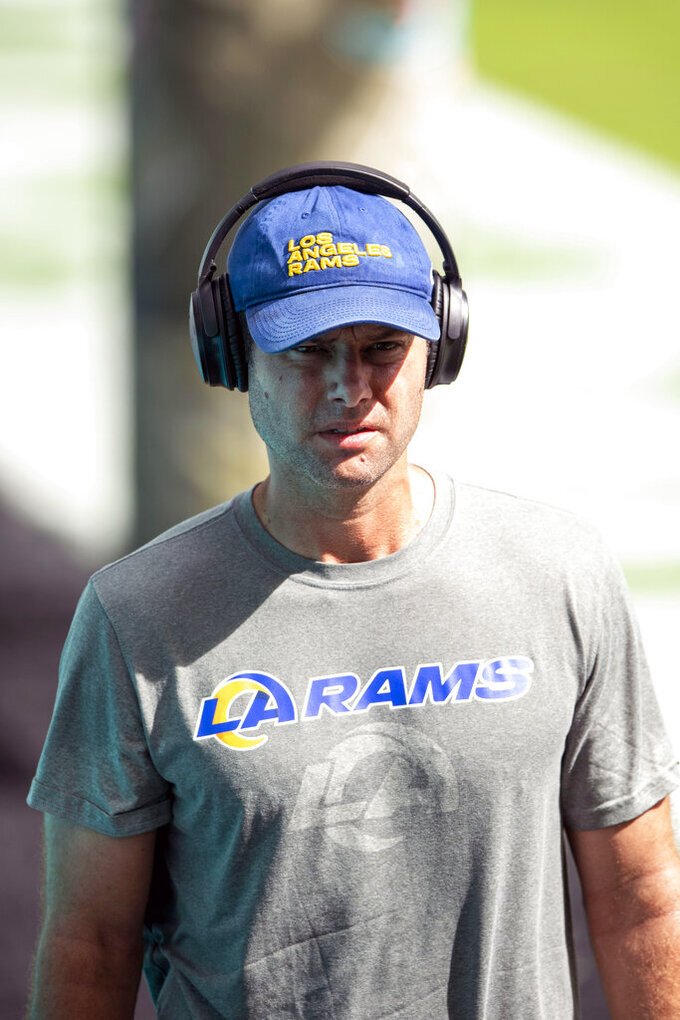 FILE - In this Sunday, Nov. 1, 2020 file photo, Los Angeles Rams defensive coordinator Brandon Staley watches his players before an NFL football game against the Miami Dolphins in Miami Gardens, Fla. Brandon Staley has only been the Los Angeles Rams' defensive coordinator for 13 games, and everybody already knows he could be on his way up. The 37-year-old Staley's name is prominent in NFL circles this month as the league's less successful teams plot their next head coaching hire.(AP Photo/Doug Murray, File)

THOUSAND OAKS, Calif. (AP) — Brandon Staley has only been the Los Angeles Rams' defensive coordinator for 13 games, and everybody already knows he could be on his way up.

Staley is a popular name in NFL circles this month as the league's less successful teams plot their next head coaching hire. Less than one full season into his rookie year as an NFL coordinator, the 37-year-old Staley's impressive work in building the league's top-ranked defense has almost guaranteed he'll be compelled to at least take some interviews in January with teams looking for the next Sean McVay.

Just four years after he was the defensive coordinator at Division III John Carroll University, Staley could perhaps have his own NFL team next fall, if he wants one. While Staley can't ignore the obvious interest in his meteoric rise, he insists he's preoccupied by more immediate goals with the Rams (9-4), who have emerged as a Super Bowl contender largely because of the defense's success.

“It's humbling anytime you're considered in those conversations,” Staley said Wednesday. “I think what you're after as a competitor is just to be recognized among your peers, the coaches and players, as someone that's doing a good job. ... I'm just excited to see where we can take it these last three games of the season. There's so much work to do, and that's where our focus is.”

The Rams are headed into Week 14 leading the NFL in fewest yards allowed (285.8) and fewest yards passing allowed (191.7) despite losing several veteran playmakers from last season’s team and replacing them largely from within. Los Angeles is allowing just 18.9 points per game and dominating in the second half of most of its games with Staley’s innovative schemes built around Aaron Donald and Jalen Ramsey.

McVay has already built a coaching tree with his impressive success in just four seasons with the Rams. Staley probably is the next big branch, whether he sticks with the Rams in 2021 or seizes another opportunity.

Staley will definitely be around Sunday when the Rams look to boost their NFC West lead against the NFL-worst offense of the New York Jets (0-13).

“Even though the Rams would get worse, that’s what it’s about,” McVay said of the potential of losing Staley. “If that’s something that he wants to do and gets an opportunity to compete for a job, there’s no doubt in my mind he’d do a great job. He’s a phenomenal coach. He’s a great person.”

Two of McVay's former assistants — Green Bay's Matt LaFleur and Cincinnati's Zac Taylor — have already become NFL head coaches. Other assistants have landed bigger jobs — most recently assistant quarterbacks coach Liam Coen, who will leave after this season to be the University of Kentucky's offensive coordinator.

“One of the best things about when we've been able to have success is you've seen guys get other opportunities that I was so fortunate to get a few years ago,” said McVay, who landed his job shortly before his 31st birthday with the encouragement of former Washington head coach Jay Gruden.

Staley’s relatively modest NFL credentials could have been a problem with a largely veteran defense, but he appeared to earn the group’s respect quickly — and his stature among his players has only grown with each success.

“The dude is a genius,” Williams added. "He's real smart. He just loves football, and he knows the people to pick. He knows the guys he wants around him."

Williams is among Staley's most astute choices. The third-year pro hadn't played regularly on defense until the final games of last season, but Staley promoted him to a starting role this season, and Williams has ranked among the NFL's most effective cornerbacks with four interceptions opposite Ramsey.

McVay plucked Staley out of relative obscurity after three seasons as an outside linebackers coach under Vic Fangio in Chicago and Denver. Although they had no serious coaching ties before they met, McVay thought he recognized something special in the high-energy, cerebral assistant with interesting ideas about scheme and tactics.

“I hope I at least have more than a year with him,” McVay said with a chuckle. “But if not, I'd be ecstatic for him and his family. He's done such a great job. ... You certainly acknowledge (the interest). But what he knows is the reason it's come up is because he's done such a phenomenal job in his role. I don't have any doubt that his focus and concentration is solely on continuing to lead our defense."

NOTES: LB Terrell Lewis (knee) practiced with the Rams on Wednesday, and McVay said they expect him to be back to full participation this week. McVay still isn't sure whether the rookie will play Sunday. ... WR Robert Woods got a day off to rest a thigh injury, but McVay expects him to play Sunday.

By Dennis Waszak Jr. 55 minutes ago
an hour ago
By Kyle Hightower an hour ago
By Schuyler Dixon 2 hrs ago
By Noah Trister 3 hrs ago