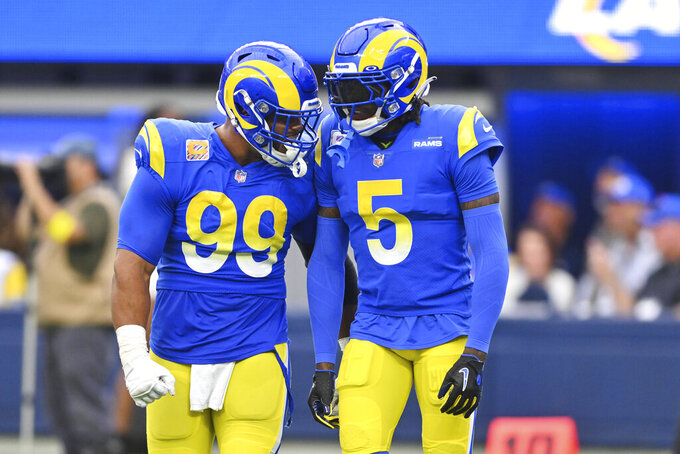 BETTING LINE: 49ers by 1 1/2, according to FanDuel Sportsbook.

49ERS PLAYER TO WATCH: RB Christian McCaffrey played a limited role last week a few days after joining the Niners following a trade from Carolina, but he should have a bigger role this week. McCaffrey gained 62 yards on 10 touches from scrimmage in his San Francisco debut. McCaffrey had 69 yards rushing and 89 yards receiving two weeks ago against the Rams while with Carolina.

RAMS PLAYER TO WATCH: LT Alaric Jackson will make his first career start protecting Matthew Stafford’s blind side. The second-year lineman from Iowa looked more comfortable when he moved over from right guard after Joe Noteboom sustained a season-ending injury to his Achilles tendon against Carolina, but the disruptive San Francisco defensive line will present a tougher test.

KEY MATCHUP: 49ers TE George Kittle vs. Rams S Taylor Rapp and Nick Scott. Los Angeles has actually limited Kittle recently, totaling seven grabs for 34 yards in the past two meetings after he had been averaging 98.3 yards with five touchdowns in the previous seven. But with injuries to the San Francisco receiving group, he should be a bigger part of the game plan, testing Rapp and Scott in coverage.

SERIES NOTES: San Francisco has won seven straight meetings in the regular season. ... The 49ers are 2-1 at SoFi Stadium, having lost the NFC championship game 20-17 to the Rams on Jan. 30. ... San Francisco has won five of six regular-season games in Los Angeles since the Rams moved back in 2016. ... Los Angeles has never shut out San Francisco, something the 49ers have done nine times. The most recent instance was a 28-0 win in 2016.

STATS AND STUFF: The 49ers are looking to start 3-0 in the NFC West for the first time since 2011. ... San Francisco has lost two straight games. The 49ers have had a skid of at least three games in four of coach Kyle Shanahan’s first five seasons with the team. ... The Niners allowed Kansas City to gain 9.12 yards per play last week, their worst mark in a game since allowing 9.42 to Chicago on Dec. 12, 1965. San Francisco had allowed a league-low 4.12 yards per play the first six games. ... The 49ers have allowed their past two opponents to convert 15 of 23 third downs (65.2%) after giving up just 30% in the first five games. ... San Francisco DE Nick Bosa is tied for the league lead with seven sacks. ... The Niners have at least one sack in 37 straight games, including the playoffs, the fifth-longest streak since 2010. ... S Talanoa Hufanga had his third INT last week, becoming the second Niners player in the past seven seasons with at least three picks in the first seven games. Richard Sherman also did it in 2019. ... San Francisco QB Jimmy Garoppolo had his 11th 300-yard passing game last week and his first this season. ... Garoppolo has thrown three INTs the past two games after having just one in his first four games. ... Since Sean McVay became head coach in 2017, Los Angeles is 3-8 against San Francisco. The Rams are 17-4 against the rest of the NFC West. ... OLB Leonard Floyd does not have a sack in five games against the 49ers since joining the Rams. He has 20 sacks in 34 games for Los Angeles against all other opponents. ... The Rams have allowed four red zone touchdowns, tied with Denver for fewest in the league. ... DT Aaron Donald has 3 1/2 sacks of Garoppolo. However, he has failed to sack Garoppolo in the past three games. ... WR Cooper Kupp has 32 receptions for 362 yards and one touchdown in his past three games against the 49ers. He has at least 118 yards receiving in each of those games. ... DB Jalen Ramsey has one sack in each of his past two games. He did not have a sack in his first 95 games.

FANTASY TIP: With Samuel out, San Francisco WR Brandon Aiyuk becomes a high-risk, high reward gamble. He had six grabs for 107 yards in Week 18 against the Rams to help the 49ers clinch a playoff spot, but Aiyuk is averaging three catches for 25 yards in his other three games versus Los Angeles.