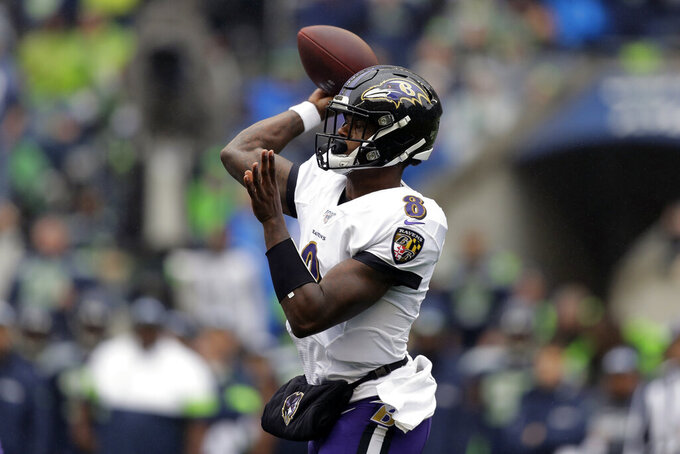 Baltimore Ravens quarterback Lamar Jackson passes against the Seattle Seahawks during the first half of an NFL football game, Sunday, Oct. 20, 2019, in Seattle. (AP Photo/John Froschauer)

Lamar Jackson is off to a sensational start with his arm and his legs, putting up eye-popping numbers in his second NFL season. The Baltimore quarterback knows he has a long way to go, though, to become great.

He'll see Exhibit A on the other sideline when the Ravens host Tom Brady and the undefeated New England Patriots on Sunday night in one of the more intriguing matchups of Week 9.

While Brady has Jackson's vote for the "Greatest of All Time" at quarterback, the New England star is hardly satisfied — even with all those rings and records. The Patriots are looking for their third 9-0 start in franchise history and second in five years.

"You have to sharpen your tools," Ravens defensive tackle Brandon Williams said, "because they're definitely sharpening theirs."

It all starts with Brady, of course. But Bill Belichick's bunch has also been doing it with a downright stingy defense.

The Patriots lead the NFL in points allowed per game (7.6) and have scored as many defensive touchdowns as they have allowed: four.

"We'll see how good they are once we play them," Ravens tight end Nick Boyle said. "I don't think they've seen anything like our offense or like Lamar."

In fairness, few have.

The dynamic Jackson is the only player in the NFL with at least 1,500 yards passing and 500 yards rushing this season. Jackson also ranks 10th overall in the league with 576 yards rushing — more than seven teams total.

"He's a major problem and everybody's had trouble with him," Belichick said. "It'll be a big challenge for us. Yeah, he can do it all. He can run, he can throw, can throw on the run, can extend plays. He's tough."

Week 9 began Thursday night with San Francisco's 28-25 road victory over Arizona that lifted the 49ers to 8-0.

All eyes will be on Chiefs quarterback Patrick Mahomes — whether he's on the sideline or under center.

Mahomes is recovering from a dislocated kneecap that kept him out of Kansas City's last game, a 31-24 loss to Green Bay. If the reigning NFL MVP can't play, it'll again be Matt Moore starting after he had 267 yards passing and two touchdowns against the Packers.

Meanwhile, Kirk Cousins is coming off setting a Vikings single-game record for completion percentage (88.5 after going 23 of 26 last week in a win over Washington. He'll lead a Minnesota squad that hasn't played at Arrowhead Stadium since 1974.

Matt LaFleur is off to quite a start with the Packers, becoming the 19th NFL head coach and first since Jim Harbaugh in 2011 to win at least seven of his first eight games.

The Chargers are struggling on offense, even with the return of Melvin Gordon, so coach Anthony Lynn made a change by firing coordinator Ken Whisenhunt.

The Seahawks are looking to start 7-2 or better for the fifth time, and they'll face a Buccaneers team that's concluding a six-week stretch in which it hasn't played a game in its home stadium.

Jameis Winston is coming off his fourth game with 300 or more yards passing for Tampa Bay, but he also has 10 turnovers in his last two outings.

Russell Wilson leads the NFL with 17 touchdown passes this season, with only one INT. He'll also tie guard Chris Gray for the franchise record with 121 consecutive starts.

The Texans are making their first trip to London, but Wembley Stadium has been a home-away-from-Jacksonville for the Jaguars, who are playing there for the seventh consecutive year.

Deshaun Watson is the first player in NFL history with at least 15 TD passes and five rushing scores in his team's first eight games of season. The Texans won't have J.J. Watt on defense, though, after he was lost for the season last week with a torn pectoral.

Minshew Mania remains alive and well for the Jaguars, with quarterback Gardner Minshew leading rookies with 13 TD passes and a 98.8 quarterback rating. He has had a productive supporting cast around him with Leonard Fournette leading the AFC with 791 yards rushing, and wide receiver DJ Chark tied for the league lead with six TD catches.

This marks the first meeting between the teams since 1997 to not feature the Peyton Manning for the Colts or Ben Roethlisberger for the Steelers.

Jacoby Brissett has done a solid job replacing the retired Andrew Luck, leading the Colts to three straight victories. Indianapolis has also gotten used to playing nail-biters: Every one of its games this season has been decided by a touchdown or less.

Pittsburgh's Mason Rudolph is coming of a career-high 251 yards passing last week in Pittsburgh's victory over Miami. Rudolph will see if he can get things done on a Sunday, though, after being the first QB in NFL history to have his first two career victories come on "Monday Night Football."

The Titans have won consecutive games by a combined seven points and can thank quarterback Ryan Tannehill in large part. He has thrown for 505 yards with five TDs and one interception with a 115.3 passer rating in his two starts since replacing the benched Marcus Mariota.

Kyle Allen remains the starting quarterback for the Panthers but took his first career loss in a 51-13 blowout defeat against San Francisco. He also threw the first three interceptions of his career. Allen will have to be on guard against the Titans, who forced four turnovers last week against Tampa Bay and are tied for second in the NFL with a plus-7 turnover margin.

The Redskins are in jeopardy of opening 1-8 for the first time since 1998, and rookie Dwayne Haskins was in line to make his first career start if Case Keenum isn't cleared from concussion protocol.

The Bills' defense could be in for a bounce-back game after a 31-13 loss to Philadelphia. Buffalo has forced at least one turnover in seven straight games and will face a Redskins offense that has scored a combined 36 points in the last five games.

Here's one subplot: The teams are playing for the first time since the Eagles won the NFC wild-card game in Chicago last January when Cody Parkey double-doinked a field goal in closing seconds. Parkey is gone, replaced by Eddy Pineiro — who missed a 41-yarder as time expired last week after clanging a 33-yarder off an upright.

The Raiders are playing their first game in Oakland since Sept. 15, and maybe being back home will help change their fortunes. Jon Gruden's group is the sixth team since 1990 to lose back-to-back games while averaging at least 7 yards per play.

The Lions are coming off a win over the Giants that ended a three-game skid. Matthew Stafford is off to a terrific overall start as he's tied for the league lead with four games with at least three touchdown passes this season.

Baker Mayfield and the Browns are on a three-game losing streak, and turnovers and penalties are major culprits.

Cleveland turned the ball over on three consecutive plays in a loss last week at New England, and Mayfield leads the AFC with 12 interceptions. The Browns also lead the NFL with 70 penalties called on them.

Things haven't been going too well for the Broncos, either. They're averaging just 15.6 points through eight games, with the 1966 and '71 teams the only Denver squads to put up less per game. With quarterback Joe Flacco out with a neck injury, Brandon Allen will make his first NFL start in his fourth season.

The NFC East rivals meet for the second time this season, this time in front of a Monday night audience.

The Cowboys have won five straight against the Giants, who have lost four in a row overall and been outscored 38-0 in the first quarter during their skid.

Quarterback Dak Prescott and the Cowboys have the NFL's No. 1 overall offense and could be in for a big night against New York's 28th-ranked defense.

Jets coach Adam Gase returns to Miami for the first time since being fired by the Dolphins after last season following a stretch in which he went 23-25 in the regular season with one playoff appearance.

This one figures to be a doozy, though, with the teams' combined record of 1-13 the NFL's worst entering Game 8 since 1969.

Jets quarterback Sam Darnold struggled in his past two games, with one touchdown and seven interceptions, and is playing with a sprained left thumb. New York will see a familiar face in the other huddle with Ryan Fitzpatrick starting again for the Dolphins. He went 13-14 as the Jets' starter in 2015 and '16.