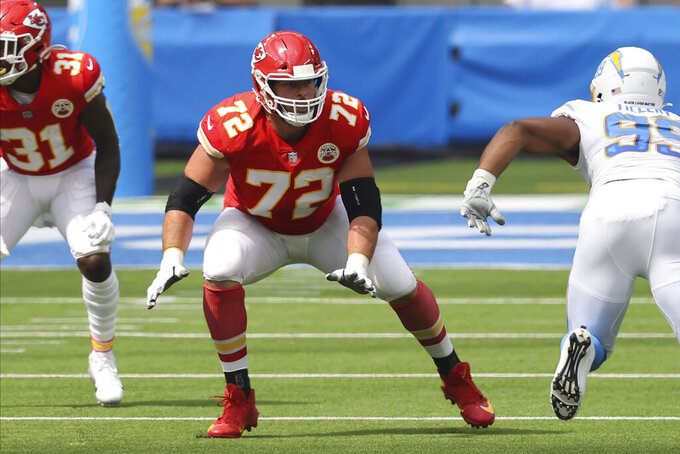 FILE - Kansas City Chiefs offensive tackle Eric Fisher (72) gets ready to block during an NFL football game between the between the Chiefs and Los Angeles Chargers in Inglewood, Calif., in this Sunday, Sept. 20, 2020, file photo. Two people with direct knowledge have confirmed to The Associated Press the Indianapolis Colts have signed Eric Fisher to play left tackle. Kansas City selected Fisher with the No. 1 overall pick in the 2013 draft but the Chiefs released their longtime starter in March. (AP Photo/Peter Joneleit, File)

It was a perfect match. Three days after agreeing to a one-year contract, Fisher explained why he chose to play for Indy.

“One of the huge things is the offensive line here," Fisher said Thursday. “To play next to the best left guard in the league, I’m darn excited for that. But across the board, there are talented guys everywhere. We’ve got a great quarterback coming from Philly and I’m excited to build that chemistry with him and build the chemistry with the guys. But to be a part of that offensive line group, I’m really chomping at the bit to get back to work."

The eight-year veteran still has a few things to prove after an especially rough start to 2021.

In March, Kansas City cut its longtime anchor on the offensive line, the guy it drafted with the No. 1 overall pick in 2013.

Fisher spent most of the next two months looking for work. But when the Colts couldn't find a suitable replacement Anthony Castonzo, who retired in January, general manager Chris Ballard reverted to his backup plan. He brought in Fisher, an old friend from his days as a Chiefs scout, for a workout.

A week later, Fisher landed the job of protecting Carson Wentz's blind side.

“It seemed right from the start. I’m a Midwest guy," Fisher said, noting he played high school and college football in Michigan. “I think it is just a great organization. Obviously, I have a connection with Chris Ballard. He brought me in and trusted me to get the job done and I’m looking forward to that challenge and everything that comes along with it."

Wentz was sacked a league-high 50 times last season with the Eagles despite playing just 12 games. Indianapolis Motor Speedway announced Thursday that Wentz would give the starting command for Saturday’s Indianapolis Grand Prix.

The question, of course, is when will Fisher return?

He and defensive end Dayo Odeyingbo, a second-round draft pick, both tore Achilles tendons in late January. The Colts are hoping both return to the field by late September or early October.

If he's not ready for the Sept. 12 season opener against Seattle, the starting job could go to Sam Tevi or Julien Davenport, two veterans with starting experience who signed with the Colts as free agents.

In the back of Ballard's mind, Fisher always was an option.

The 30-year-old's skills haven't diminished. He's been voted to the Pro Bowl twice in the past three seasons and was playing perhaps the best football of his career before last season's injury.

“As soon as I got the call I was being cut it was an automatic reset in my brain that was like, ‘I’m nowhere near being done,'" Fisher said. “I feel like I have a lot of years left in me. It’s going to be an awesome reset for myself, a fresh slate, keep working and finish the second half of my career off on a good note."