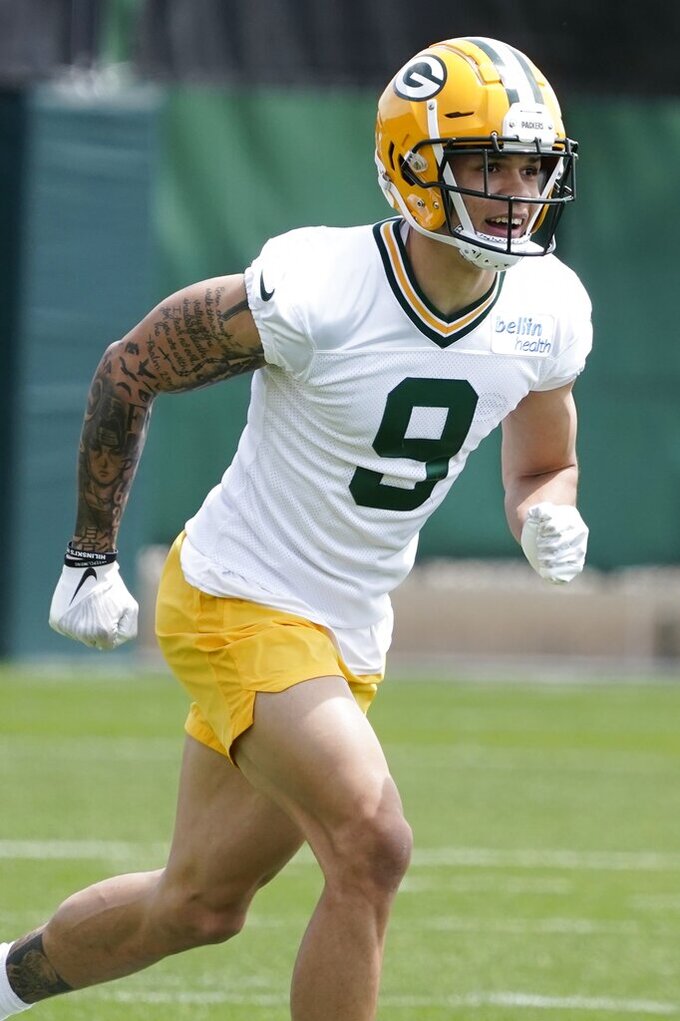 Packers coach Matt LaFleur confirmed Tuesday that Rodgers isn’t expected at all this week. The Packers conduct more OTAs next week, but Rodgers will be participating in “The Match” golf exhibition with fellow quarterbacks Josh Allen, Tom Brady and Patrick Mahomes on June 1.

“I talked to him for a while last night, which was great, just to kind of update him on just where we are and go over a few, like we do every offseason,” LaFleur said. “There’s always tweaks to what you’re doing. He’s in great spirits and it was a great conversation. But I wouldn’t anticipate seeing him at least this week.”

During an appearance on Pat McAfee’s SiriusXM and YouTube draft special last month, Rodgers said he planned on joining the Packers for their mandatory minicamp in June and “probably a few more days in May.”

Rodgers skipped all the OTAs as well as the Packers’ minicamp last year during a standoff with team management, though he reported to training camp on time and produced a second straight MVP season while leading the Packers to a third consecutive NFC North title.

He has said on multiple occasions that his relationship with team officials such as general manager Brian Gutekunst has improved quite a bit over the last year. That’s part of the reason Rodgers signed a contract extension rather than seeking a trade or retiring.

Rodgers’ presence this offseason could be particularly helpful as he adjusts to an overhauled receiving corps following the trade of All-Pro receiver Davante Adams to the Las Vegas Raiders. The Packers drafted three receivers, traded up to take North Dakota State’s Christian Watson in the second round with the 34th overall pick and also selected Nevada’s Romeo Doubs in the fourth round and Nebraska’s Samori Toure in the seventh round.

Watson said Tuesday he has spoken with Rodgers “a few times” since the draft.

“I definitely would like to see him out here, but I know there’s going to be some vets that will come later in the process,” Watson said. “We have some vets out here who are kind of taking us under their wing right now, and (we’re) being able to learn from them. When he comes, he comes, and I’m definitely going to pick his brain when he does.”

Rodgers’ absence should give backup quarterback Jordan Love more reps as the 2020 first-round draft pick continues to make up for the time he lost from the pandemic-imposed virtual offseason his rookie year. Love started the Packers’ 13-7 loss at Kansas City last season when Rodgers was unavailable due to a positive COVID-19 test.

“I think that’s Aaron’s game plan is, he doesn’t really need this time right now, so I enjoy it,” Love said. “Him not being here, it just means more reps for me and more reps for everybody else in the quarterback room. So obviously I’m loving it.”

NOTES: Other notable Packers missing from Tuesday’s volunteer workout included cornerbacks Jaire Alexander and Rasul Douglas, wide receivers Allen Lazard and Sammy Watkins and outside linebackers Rashan Gary and Preston Smith. LaFleur said Watkins, who signed with the Packers last month, has “been here throughout the majority of the offseason.” … LaFleur said the Packers would conduct joint practices with the New Orleans Saints during training camp. Details and dates are still being worked out.