Rodgers unsure how long he will play beyond this season 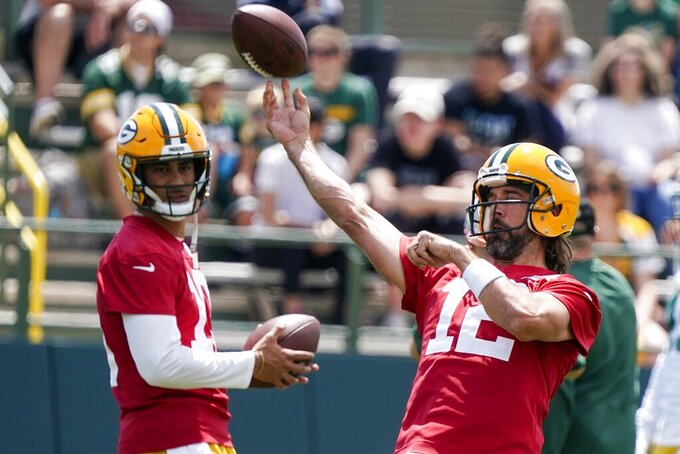 But he’s definitive about at least one element of his playing future: The four-time MVP quarterback expects to retire with the Green Bay Packers.

That scenario seemed uncertain this time a year ago, when Rodgers skipped the Packers mandatory minicamp in a standoff with team officials. That relationship has since improved enough that Rodgers signed a contract extension with the Packers after producing his second straight MVP season.

Although his new deal runs through 2026, Rodgers said Tuesday at the Packers minicamp that he doesn’t know yet whether he will play beyond this upcoming season.

“The conversations I’ve had with (general manger) Brian (Gutekunst) have been very honest and direct, and that’s not going to change,” Rodgers said. “We’ll sit down after the season, hopefully after a championship, and figure out what the next step is.”

Asked if he expects to finish his career with the Packers, Rodgers replied, “Yes. Definitely.”

Rodgers has led the Packers to three straight NFC North titles but hasn’t reached the Super Bowl since Green Bay’s 2010 championship season. The Packers lost 13-10 to the San Francisco 49ers in the divisional playoffs last season.

The 38-years-old Rodgers is facing a new challenge at this minicamp as he works with a new-look receiving group after the Packers traded Davante Adams to the Las Vegas Raiders at the two-time All-Pro wideout’s request.

“Last year, when you have a guy who’s that talented, it’s probably not an exaggeration to say that 80% of the plays in the passing game were designed specifically for 17 (Adams),” Rodgers said. “So we’re obviously going to do some things a little different.”

Rodgers acknowledged he was disappointed over Adams’ departure, but added that “I love him like a brother and I appreciate everything we accomplished together.”

“I’m a little biased, but it’s hard to think of a better player I’ve played with,” Rodgers said. “He had the chance to be an all-time record holder in a lot of categories at receiver for us. I thought that might be a little nugget that would kind of keep him here, but again, 'Te made a decision that he thought was in the best interest of him and his family, and I can’t fault him for that at all.”

Also missing from minicamp is the Allen Lazard, the Packers’ top returning receiver and a restricted free agent who hasn’t yet signed his contract tender.

“I like production over potential,” Rodgers said. “We have some production. We have a lot of potential, so we need to temper expectations and heighten the accountability.”

There’s plenty of work ahead for Rodgers and Co. as Green Bay’s offense goes through a transition period.

Amid all those changes, Rodgers remains the guy under center, at least for now. Whether he’ll still be there next season probably won’t be known until this one is over.

“I’ve never been one to want some sort of going-away season or anything like that,” Rodgers said. “Plus, I don’t think it’s fair to the mental state at the end of the season and thinking how you feel.

“If you say I’m for sure playing two more, three years and then you have a magical season that ends with a championship and think that that might be the best way to ride off, I don’t want to commit to something. You say I’m only playing one more year and you have a bitter taste in your mouth and still got the drive and the passion to play one or two more years, I just don’t want to get pigeonholed into it. So I’m focused on this season.”