Russell Wilson Era begins for Denver Broncos back in Seattle 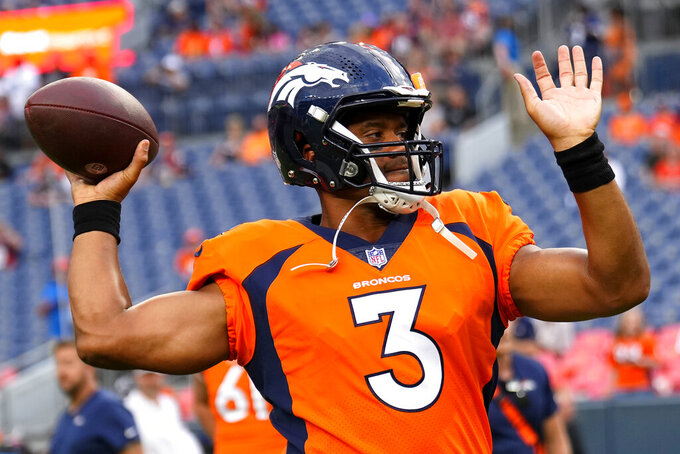 DENVER (AP) — Peyton Manning didn't have to deal with his emotional return to Indianapolis until he'd been a member of the Denver Broncos for almost a year and a half.

The Broncos' new quarterback kicks off the second chapter of his storied career back in Seattle, where he led the Seahawks to two Super Bowls and a championship parade before his relationship with Pete Carroll soured.

The prime-time matchup on Sept. 12 pits the partners in the biggest blockbuster trade this offseason, one that sent five draft picks and three players to Seattle, including Drew Lock, one of 10 starting QBs Denver has shuffled through over the last six seasons.

Joe Buck said this was exactly the opening game he wanted with Troy Aikman and him taking over the “ Monday Night Football ” booth after a 20-year stint together at Fox.

“To have it right out of the box," Buck said, “I think is awesome.”

Wilson thinks so, too.

"I think it’s going to be an exciting time," Wilson said. “Seattle has meant the world to me over the past 10 years.”

Wilson hasn't had a bad word to say about the Seahawks since moving to Denver, where he and his wife, Ciara, bought a $25 million mansion and immediately became a celebrity couple about town.

It took a while for Manning to adjust to the Mile High City, where he still lives, after the Colts cut him in 2012 following several neck fusion surgeries.

While Manning had a terrific four-year run in Denver, he lost three of the four times he faced the Colts, starting with a 39-33 heartbreaker at Lucas Oil Stadium on Oct. 20, 2013, that featured a tear-jerking pregame tribute.

Wilson insists his return to Seattle “has to be non-emotional” no matter if he's cheered as Manning was in Indianapolis or jeered as Brett Favre was in 2019 when he returned to Green Bay in a purple helmet.

“I’ve always kind of played neutral,” Wilson said. “What I really believe in is the ability to be neutral in the midst of the storm, the midst of chaos, the midst of opportunity, the midst of good things, good time, and challenging times in order to be able to play this game even-keeled.”

That approach help produce a 113-60 record for Wilson in Seattle, including a 9-7 mark in the playoffs. Wilson has missed the postseason just twice: in 2017, when the Seahawks went 9-7, and again last year when he went 6-8 and a finger injury sidelined him for the first time in his career.

After bumbling their way to a 39-58 record since Super Bowl 50 under pedestrian passers, the Broncos are gladly giving Wilson anything he wants: his own personal passing coach, massage therapist and chef, an office at team headquarters, a seat at the table when GM George Paton builds his roster.

“I talk to Russ daily and I kind of tell him our plan, what we’re looking for, and our needs," Paton said before the draft. "Russ is a football junky. He’ll want to know what players we’re looking at, and I’ll tell him. He’ll watch them and give me his opinion. He’s a great resource.”

Wilson, who has two years left on a contract that pays him $19 million in base salary this season, is just one part of the massive makeover the Broncos underwent this offseason as they changed coaching staffs, owners and team presidents in addition to quarterbacks.

“It is an honor to steward this historic franchise,” Walmart heir Rob Walton said after buying the Broncos for $4.65 billion, a record for a professional sports team. “Our No. 1 priority is putting a winning team on the field to win Super Bowls.”

And job No. 1 for the new ownership group is securing Wilson's long-term services for something in the neighborhood of $300 million over five years.

“At this point, nothing to say about his contract,” said Greg Penner, Walton's son-in-law, who nonetheless had plenty to say about Wilson's presence during the new owners' introductory news conference in early August.

“We couldn’t have been more excited as we were going through the process to see that the organization had made the trade for Russell," Penner said. “It’s critical to have a great quarterback in this league and coming in this organization with Russell in place is a tremendous benefit for us.”

Shortly before Wilson's arrival, first-time head coach Nathaniel Hackett injected a jolt of energy into the franchise by bringing with him three novice coordinators and an innovative approach to offseason training that features lots of rest days and no 7-on-7 drills that are a staple of today's passing game.

Hackett also jettisoned the 1-on-1 pass rushing drills in the interest of science and safety, dismissing critics who crushed him on local radio for his “Camp Jog-through” approach that featured little contact save for a spirited joint practice against the Cowboys.

“It's different than the school I grew up in and the things I thought were beneficial,” said NFL receiver-turned-radio host Brandon Stokley. “I guess the proof will be in the pudding."

Either way, the Broncos finally have a quality quarterback who gives them confidence they can compete again in the tough AFC West.