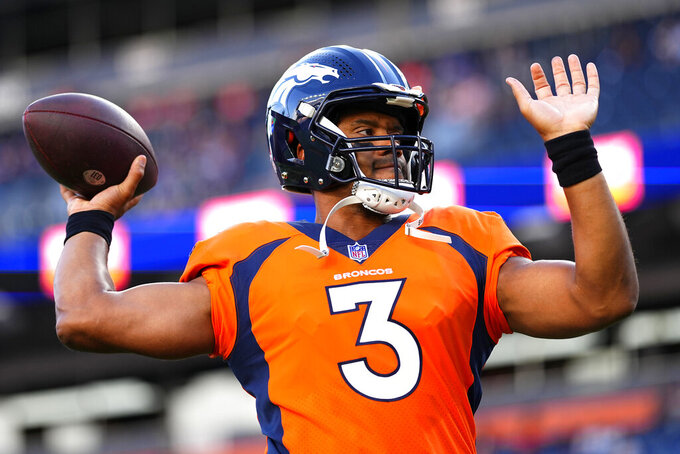 ENGLEWOOD, Colo. (AP) — Russell Wilson's five-year, $245 million extension includes a $50 million signing bonus, $77 million in the first eight months and a whopping $165 million in guarantees — all before he takes his first snap for the Denver Broncos.

Wilson left money on the table, however, declining to reset the NFL's stratospheric quarterback market.

“For me, it wasn’t really about how much, necessarily,” Wilson said Thursday. "It was about how many — how many Super Bowls we win. And that was really the focus.”

The extension keeps Wilson, 33, under contract in Denver through the 2028 season for $296 million. It’s the biggest contract in Broncos history and one of the largest ever in the NFL.

Wilson didn't want to handicap general manager George Paton as he builds his roster around him. So, he took $49 million on average in new money, $1 million less than Aaron Rodgers did with his four-year, $200 million deal earlier this year to stay in Green Bay.

Wilson's decision to take less will presumably affect Lamar Jackson's negotiations with the Baltimore Ravens on a contract extension and could have ripple effects when rising stars Justin Herbert and Joe Burrow come up for new deals in the years ahead.

“I had such an amazing first decade of my career, and the next decade I’m really excited about,” Wilson said. “To me, what it was really about was being able to win championships and being able to have enough space in the salary cap so George can make his magic ...

“We want to make this a destination location. We have an amazing tradition, amazing football team, we have a lot of amazing new faces” in the owner's suites and front office. “These are world class visionaries and world class executors and winners. At the end of the day, you want to be surrounded by that. And what’s important, too, is making sure you surround yourself with amazing players.”

Wilson’s new deal comes three weeks after the league approved the $4.65 billion sale of the team to the Walton-Penner ownership group that represented the largest amount ever paid for a professional sports franchise anywhere in the world.

“I've worked closely on this over the last three weeks,” Paton said. “And Greg rolled up his sleeves and he was a big help: his support, his communication, his responsiveness and, of course, the resources were instrumental into us getting this deal done.”

Penner called Wilson "a dynamic leader whose positive impact is felt throughout our entire team and community. Our organization is fully committed to winning and competing for Super Bowls with Russell as a Bronco for many years to come.”

Wilson had two years and $51 million left on his deal when the Broncos acquired him from Seattle for five draft picks and three players in a franchise-changing trade six months ago. That $51 million has been restructured.

Penner said last month that Paton's trade for Wilson in the spring made the Broncos an even more attractive asset.

“It’s critical to have a great quarterback in this league and coming in this organization with Russell in place is a tremendous benefit for us," Penner said.

“On our first diligence trip in May here, one of the first people we ran into the hallway when Rob, Carrie and I were here was Russell,” Penner added. “Right away, we got a sense of how positive he is as a leader. He is just such a dynamic individual. I can’t wait to see him on the field.”

Wilson will make his Denver debut on Sept. 12 when the Broncos open the season at Seattle, where Wilson played for a decade, leading the Seahawks to two Super Bowl appearances and one championship.

Wilson's 113 victories, including one in Super Bowl 48 over the Broncos, are the most for a quarterback in his first 10 NFL seasons. He's made the Pro Bowl eight times and he missed the playoffs just twice in his first decade in the league.

Star safety Justin Simmons said when he heard of Wilson's new deal, “the first thing I thought of was: well deserved. He's a proven quarterback in this league, a Hall of Famer, and I'm happy for him — he'll have to take me to dinner or something, a very expensive one.”