Saints' Hill not 'caught up' in type, or frequency, of usage 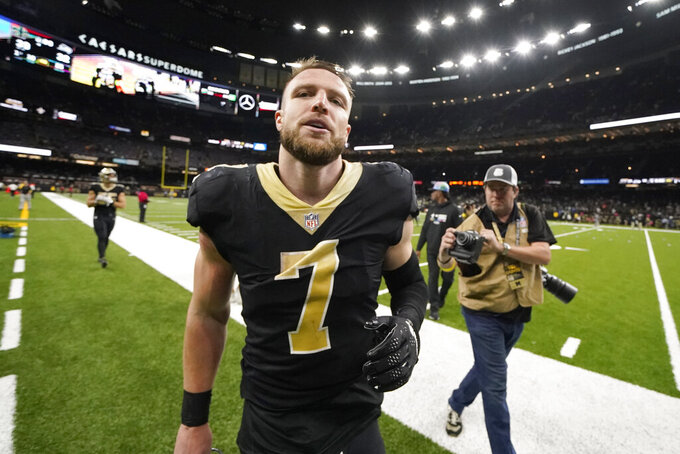 METAIRIE, La. (AP) — When Saints so-called “Swiss Army knife” Taysom Hill emerged as a sensationally successful focal point of New Orleans' offense last weekend, one question he never thought to ask was: “Why did it take until the fifth game of the season?”

“I'm trying not to get too caught up in that,” Hill said after practice on Wednesday, as the Saints (2-3) prepare to host Cincinnati (2-3) this Sunday. “I trust our coaches in what we’re doing, And some weeks there’s some advantages, more emphasis.

“Early in your career, it’s a little bit harder to not always think about those things,” Hill added. “I’m at a point in my career now where I’m comfortable — I don’t want that to be viewed as complacent in any way, because I’m hungry, I want all the opportunities and various things like that. But I know that they’ll come."

The Saints clearly saw advantages to riding Hill in a 39-32 victory over Seattle on Sunday that marked the best day this season for New Orleans offensively. Hill rushed for 112 yards and three touchdowns, and passed for a 22-yard score. He even returned three kickoffs for 69 yards after Deonte Harty left the game with a foot injury.

On Wednesday, Hill was selected as the NFC offensive player of the week, but was quick to deflect credit to the offensive line, noting that the Saints had 235 yards rushing as a team.

“You don’t do that unless the guys up front are playing really well,” Hill said. “So, I look at that like a collective award.”

Hill is listed on the Saints' roster as a tight end — a change from quarterback, his position in college at BYU and in the NFL until this season.

It was while he was a third-string QB with the Saints that former coach Sean Payton agreed to unconventional suggestions from assistant coaches to get more use out of Hill's obvious all-around athleticism.

It began by putting Hill on kick and punt coverage and progressed to kick returns and then intermittently subbing him into the offense for designed QB runs, or periodic snaps at running back, tight end or receiver.

Fellow Saints tight end Juwan Johnson, said that while Hill spends a lot of time in the tight end room at team headquarters this season, he remains anything but a specialist.

“You don't see too many tight ends that run like him, catch and throw like him,” Johnson said. “You could try to emulate what he does, but it's so unique and so different. He's probably one of a kind.”

Hill said he did virtually no work at QB during this past training camp, but that changed when Jameis Winston went out with back and ankle injuries after Week 3. Veteran backup Andy Dalton has started the past two weeks, with Hill getting more work at QB in practice.

“It’s a fluid deal," Hill said, adding that he's been playing QB “my whole life, so I still feel comfortable doing it.”

That was apparent when he threw a 22-yard touchdown pass to tight end Adam Trautman on Sunday that was not as simple as it looked.

The Saints were expecting a different defensive alignment than Seattle presented on that play.

It was the first and only pass this season for Hill, who normally runs when he lines up behind center.

“It was great to show that," Trautman said. "Now (defenses) can’t fit the run as fast.”

If Hill gets to throw more, he'll embrace that. But he doesn't mind trying to catch more passes, either. He's got just one catch this season for 2 yards.

“It would be easy for me to look at it and say, ‘Man, this is a tough situation because I’ve got one foot in one room and one foot in the other.’ But I’m grateful for all the opportunities,” Hill said. “I’m just going to do my best in whatever opportunity it is. ... If I start to worry about anything other than that, then you start to go a little crazy.”