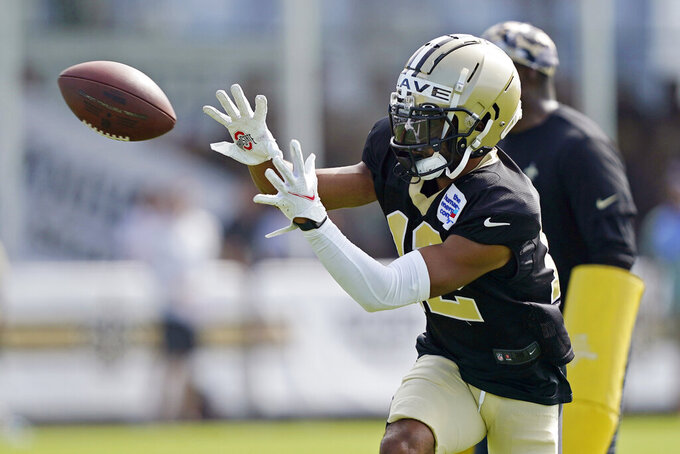 METAIRIE, La. (AP) — Saints top draft choice Chris Olave senses that the bursts of speed and sudden changes in direction that served him well in college will translate well in the NFL.

Fellow New Orleans first-round pick Trevor Penning has been exhibiting the same nasty streak as a blocker that intrigued the Saints when they were scouting him.

Their first live action against another team comes Saturday night in Houston.

“It's game speed,” Olave said excitedly. “To finally get out there to play my first NFL game is going to be fun. I can't wait.”

Olave played four seasons at Ohio State, scoring 35 career touchdowns. But he spent most of his freshman season on special teams until a teammate's injury thrust him into the game plan as a receiver for the first time in the regular season finale against rival Michigan.

Olave rose to the occasion, scoring two 24-yard touchdowns to go with his punt block that was recovered for a touchdown in a lopsided Buckeyes triumph.

“He was a freshman, got his named called up and excelled for a game that we needed him," recalled Saints second-year linebacker Pete Werner, who was on that 2018 Ohio State team. "We saw that and he got his respect really fast. ... Right when we saw that, I knew he was going to be special.”

Olave recalls that he was “definitely” nervous, “but at the end of the day, it was just playing football. So, I went out there and had some fun.”

His mindset hasn't changed in New Orleans. He already has had his share of highlights in 11-on-11 snaps in camp, including a 60-yard touchdown pass from projected starting quarterback Jameis Winston.

“He’s already a pro,” Winston said earlier in camp. “The moment isn’t too big for him. He’s just an excellent player and he works his tail off. He’s smooth and he can run and you always like that.”

Olave's ability to make sudden and hard cuts have left even seasoned defensive backs having to recover after turning the wrong way.

“I work on that, but it's really natural ability, and God blessed me with that," Olave said. “I kind of try to use that in and out of my breaks and to kind of shake people at the line. I feel like that helps me a lot.”

Olave is working to fit in with a receiver group that includes veterans Michael Thomas, Jarvis Landry, Tre'Quan Smith and Deonte Harty.

Penning, meanwhile, aims to demonstrate that he belongs at left tackle, where veteran James Hurst has so far been taking the bulk of first-team snaps in practice.

While the 6-foot-7, 332-pound Penning wears a welcoming smile during media interviews, he plays with a mean streak that coaches like — for the most part.

Penning was involved in a series of after-the-whistle scuffles and was dismissed from one practice because of it. But while Penning would rather avoid discipline from coaches and game officials, he doesn't want to change his ferocious and relentless approach to blocking.

Penning figures a lot of eyes will be on him — both because of the buzz he's generated with his physical play and because the Saints invested a first-round pick on him — and he couldn't be happier about it.

“I love when people are paying attention to the linemen," Penning said.

That's bound to happen when Penning takes his first live NFL snaps against the Texans.

NOTES: Winston (right foot), Werner (groin), and rookie defensive back Alontae Taylor did not practice on Thursday. Saints coach Dennis Allen said Taylor's injury appears to be minor. Winston already has been ruled out of the preseason opener, which many starters routinely sit out anyway to minimize exposure to injury and allow coaches to evaluate less experienced players.