Saints' Sean Payton steps down as coach after 16 years 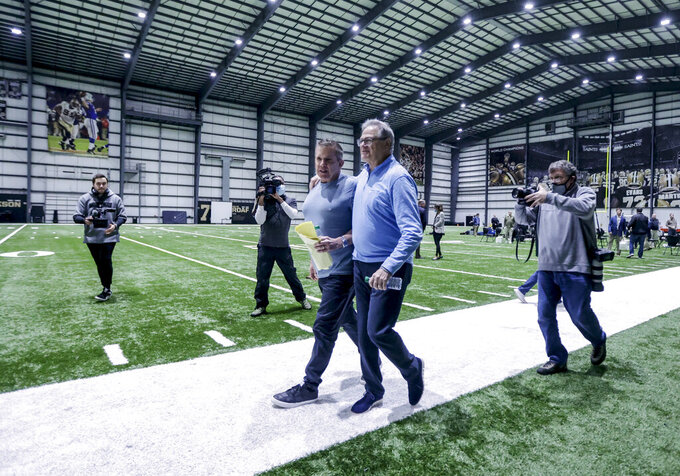 NEW ORLEANS (AP) — Before Sean Payton took his first head coaching job in New Orleans in 2006, the Saints had a grand total of one playoff victory since their founding in 1967.

The standard will be considerably higher for the next head coach in the Big Easy.

Payton, whose 16-year tenure with the club included its only Super Bowl championship and also a one-season suspension stemming from the NFL’s bounty investigation, is leaving coaching — for now.

Payton informed the team on Tuesday that he is leaving his first and only NFL head coaching job with a 152-89 regular-season record — and nine playoff appearances — in 15 seasons. The 2009 Saints won the NFL title.

“I don’t like the word retirement," Payton said Tuesday afternoon at an announcement attended by owner Gayle Benson, top management and assistant coaches. "I still have a vision for doing things in football. And I’ll be honest with you, that might be coaching again at some point. I don’t think it’s this year, I think maybe in the future. That’s not where my heart is right now.”

Payton is under contract with the Saints for three more seasons, and if he's hired by another NFL team before then, his new team would have to provide compensation to New Orleans.

The Saints made the relatively risky decision to hire Payton as a rookie head coach in their first season back in New Orleans after being displaced from the city by Hurricane Katrina for the entire 2005 season, when they went 3-13 under Jim Haslett.

Payton oversaw an immediate storybook turnaround. The Saints won the NFC South, captured the NFC's second playoff seed, and advanced to the franchise's first NFC title game by beating Philadelphia in a divisional-round playoff in a rebuilt Superdome — the site of widespread damage and suffering of stranded evacuees right after Katrina had flooded 80% of New Orleans.

New Orleans narrowly missed the playoffs this past season, going 9-8 in its first campaign since the retirement of Drew Brees. Payton had lured the quarterback to New Orleans as a free agent in 2006.

Payton said he urged the Saints to take a risk on Brees, who was coming off throwing-shoulder surgery, because “we weren't winning any jump balls” for talent — given the challenges the Saints faced rebuilding the franchise in a community simultaneously rebuilding from one of the worst disasters in American history.

Brees went on to set every significant franchise passing record in a high-flying offense designed and called by Payton, who'd been a quarterback in high school in Naperville, Illinois, and in college at Eastern Illinois.

Under Payton, the Saints became a perennial contender, and they beat Peyton Manning and Indianapolis 31-17 to win their lone Super Bowl. They also lost the 2018 conference title game to the Rams after a blown officiating call that led to a temporary NFL rules change.

Payton was a member of the league's powerful competition committee from 2017 until leaving that position last November.

“I don’t know what’s next and it kind of feels good," he said.

“Look, I read the reports and I understand — I’ve not spoken to anyone from a media outlet relative to doing television, or radio. Maybe that opportunity arises,” Payton said. "But every time I read something that says he’s in line for this job, I’ll call my agent Don (Yee) and I’ll say ‘Don, did you hear something because I’ve not heard anything?’ That’s OK. I think I’d like to do that. I think I’d be pretty good at it.”

Payton said he wasn't burnt out on coaching and in fact enjoyed the challenges of the 2021 season, which not only was the second straight to occur with pandemic-related restrictions and the unpredictable roster instability that came with it, but also began with the club's displacement to the Dallas area for a month because of Hurricane Ida.

Rather, Payton sounded not unlike the countless people who've simply re-evaluated their work-life balance during the pandemic and didn't want life to pass them by without trying something fresh and new.

“I felt the time was right — for me,” Payton said. “It's something I've been thinking about. ... Not many get to choose their terms. And I looked at it as an opportunity to see my kids more, to travel more, to get in better shape.”

Saints owner Gayle Benson said she and top front office personnel hoped they could persuade Payton to stay — and believed he likely would — until he informed them Tuesday that he was definitely done.

“I was surprised and it really is a bittersweet day,” Benson said. “I feel like he deserves this. ... It's been a wonderful ride.”

A valued offensive assistant for the Eagles, Giants and Cowboys before landing the head coaching job in New Orleans, Payton actually played in the NFL — as a replacement player for the Bears during the 1987 strike.

He missed the 2012 season when the NFL handed down varying suspensions to Payton, assistant coach Joe Vitt, general manager Mickey Loomis and four players after an investigation found the Saints had a performance pool offering cash rewards for big and sometimes injurious hits. The player suspensions eventually were overturned by former NFL Commissioner Paul Tagliabue, and Payton was reinstated early in 2013.

Payton made his mark as an innovative designer of offensive schemes and as a play caller, coinciding with Brees’ extraordinary production. The Saints never led the NFL in offense before Payton arrived, but finished first in that department six times since: in 2006, 2008, 2009, 2011, 2014 and 2016.

The Saints ranked first in scoring in 2008 and 2009. They ranked in the top 10 offensively for 14 consecutive seasons from 2006-2019. Although Payton wasn’t coaching in 2012, his offensive coordinator, Pete Carmichael Jr., was calling plays based on the principles of the offense he designed.

In 2020, Brees’ final season, the Saints, went with more of a ball-control attack featuring running back Alvin Kamara and ranked 12th offensively. This season, however, New Orleans dropped to 28th in offense.

Payton also had to miss a game in 2021 after contracting COVID-19 for the second time since the spring of 2020.

Defensive coordinator Dennis Allen stepped in as acting head coach for that game, which the Saints won 9-0 at Tampa Bay. Allen, a former head coach with the Oakland Raiders, has made no secret of his desire to be in charge again.

Now there’s an opening on the very team that employs him.

“We're going to look in-house and outside also,” Benson said. “We're going to make a thorough search and choose the right person. ... We're going to do a great job in choosing another person that's going to be able to lead us the way Sean did.”