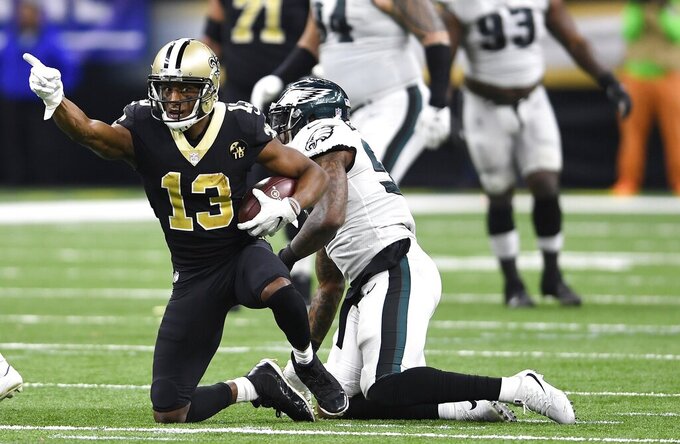 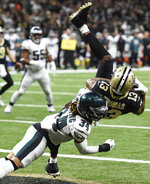 NEW ORLEANS (AP) — The New Orleans Saints got two touchdown passes from Drew Brees, two interceptions by Marcus Lattimore, and rallied from a 14-point deficit to beat the Philadelphia Eagles 20-14 Sunday to advance to the NFC championship game.

Using a dominant ball-control offense after a horrendous start, Brees took the Saints (14-3) on scoring drives of 92, 79 and 67 yards. And a few gambles paid off to assure New Orleans will host the Rams (13-4) next Sunday for a spot in the Super Bowl.

Los Angeles, which fell 45-35 at the Superdome in November, will try again next week, with the winner taking on either Kansas City or New England in the Super Bowl in Atlanta. The Saints' win finished off a sweep of the divisional round by teams coming off byes.

Wil Lutz added two field goals for the Saints, who last got this far in 2009, when they won the Super Bowl.

Philadelphia (10-8) will not repeat as NFL champion; no team has done so since the 2004 Patriots.

This was really two games in one. Philly scored on its first two drives as the Saints could do virtually nothing right.

After that opening period, it was all New Orleans, yet the resilient Eagles kept it close enough that when Lutz missed a 52-yard field goal with 2:58 remaining, they were only one-score behind.

Nick Foles, the hero of last year's Super Bowl run, got them in position for yet another late winning score — just like last week at Chicago and last February against New England for the championship.

Then Alshon Jeffery couldn't handle a second-down pass from the Saints 27 and Lattimore grabbed his second interception to clinch the win.

FOXBOROUGH, Mass. (AP) — Sony Michel ran for 129 yards and had three touchdowns and New England beat Los Angeles in the divisional playoffs to earn its eighth straight trip to the AFC championship game.

New England (12-5) will play at Kansas City in next week's AFC title game. The Patriots beat the Chiefs 43-40 in Foxborough in Week 6. The Patriots finished 9-0 at home this season.

It is the 13th conference championship game appearance by the Patriots during the Tom Brady-Bill Belichick era.

Philip Rivers finished 25 of 51 for 331 yards, three touchdowns and an interception. He is 0-5 in games played in Foxborough, including 0-3 in the postseason.

Brady finished 34 of 44 for 343 yards and a touchdown. He improves to 8-0 as a starter against Rivers, who drops to 1-8 against New England all-time.

New England scored on its first four possessions of the game to build a 35-7 halftime lead.