Seahawks happy to be home for a while, set to host Raiders 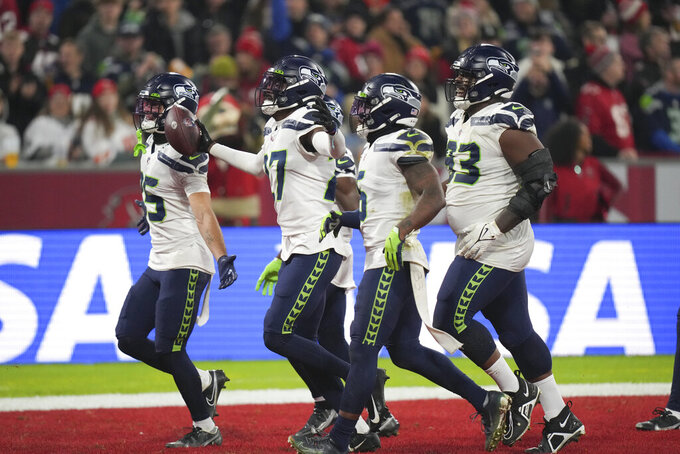 Seattle Seahawks' Tariq Woolen (27) reacts after an interception during the second half of an NFL football game against the Tampa Bay Buccaneers, Sunday, Nov. 13, 2022, in Munich, Germany. (AP Photo/Matthias Schrader)

SEATTLE (AP) — There was an underrated aspect to what the Seattle Seahawks accomplished through their first 10 games and their surprising surge to the top of the NFC West.

They did most of it away from home and flew plenty of miles in the process — most recently to Germany, where they lost to Tom Brady and the Tampa Bay Buccaneers before their bye week.

That changes beginning Sunday, when the Seahawks (6-4) return to Lumen Field and host the Las Vegas Raiders. Seattle, which is tied with San Francisco atop the NFC West, plays five of its final seven games at home and only has one more game outside the Pacific time zone.

“I’m tired of traveling. I’m tired of being on planes, leaving on Friday or Saturday,” wide receiver DK Metcalf said. “I’m just happy to be back in front of the 12s (Seattle's fans) for five more games. I know they are excited to have us back.”

And Seattle's opponents during this upcoming stretch look less daunting than they did when the season began. The Seahawks' next three games are against teams with three wins apiece: the Raiders, the Los Angeles Rams and Carolina.

“I hope that there is a lot of energy for this finish because we certainly have it here in the building,” Seattle coach Pete Carroll said.

Las Vegas (3-7) snapped a three-game skid with last week’s overtime win at Denver and in the process gave the Seahawks a boost. Every Denver loss improves Seattle’s draft position as owners of the Broncos’ first-round pick next season. (Denver got Russell Wilson out of that deal, which isn't looking so great for the Broncos.)

The Raiders have lost five road games this season, four by one score.

“We don’t know this team very well, so our team is hard at work in terms of learning the personnel, the scheme, the challenges they present in all three phases,” Raiders coach Josh McDaniels said. “And then obviously, going out there and playing in Seattle, it’s always a different atmosphere. Very challenging place to play. So, a lot of hard work ahead of us here.”

With rain in the forecast for Sunday, the Raiders have been practicing with a wet football this week.

“This is the unique experience where we really haven’t had any wet weather days,” McDaniels said. “So we’ll simulate that, whether that’s ball-handling, quarterback-center exchanges, the snapping to the to the specialists, throwing and catching the ball with a little moisture on it.

“We’re not going to have the sprinkler system on when we’re practicing, but we’ll do as much as we can to try to simulate some of the things that I think our guys don’t have as much repetition at.”

Quarterback Derek Carr said he often uses a water bottle to spray a football if he thinks there’s a chance the Raiders will play in rain.

Seahawks 6-foot-4 cornerback Tariq Woolen might be in his first season, but for the Raiders, he’s playing like a veteran.

“He’s a big, much taller corner than what’s normal in the league, and he’s a rookie,” receiver Davante Adams said. “He doesn’t look like a rookie at all on tape.”

Carr said Woolen reminded him of former Seahawks great Richard Sherman because of his size.

“Sherm is a Hall of Fame type player, and (Woolen’s) obviously a rookie,” Carr said. “He has a long way to go. But when you turn the tape on, he stands out. He’s extremely talented at catching the football. When the ball is in his area, it doesn’t look hard for him to make plays on it."

Woolen made his fifth interception two weeks ago against the Bucs. He’s the third rookie since 2010 with five picks in his first 10 games, joining Casey Hayward and former Seattle safety Earl Thomas. Woolen needs one interception to tie the franchise record for picks by a rookie.

Chandler Jones has a strong history against the Seahawks, with 16 1/2 sacks, 12 tackles for loss and six forced fumbles in 11 games. The problem for the Raiders is Jones did all that when he played for Arizona. He has just half a sack this season, but with Maxx Crosby facing double teams on the other side, Jones could have opportunities. It’ll be another test for Seattle’s rookie offensive tackles Abraham Lucas and Charles Cross.

The Seahawks were frustrated by their lack of a run game in their loss to the Buccaneers. Rookie Kenneth Walker III was limited to 17 yards on 10 carries. The Seahawks seem intent on not letting that happen again, so expect plenty of opportunities for Walker to put up yards against the 20th-ranked run defense in the league.

Walker is tied with Tennessee’s Derrick Henry for the most TD runs since Week 5 with seven.

Seattle will be without WR Dee Eskridge due to a broken bone in his hand. The Raiders listed starting running back Josh Jacobs as questionable with a calf injury.